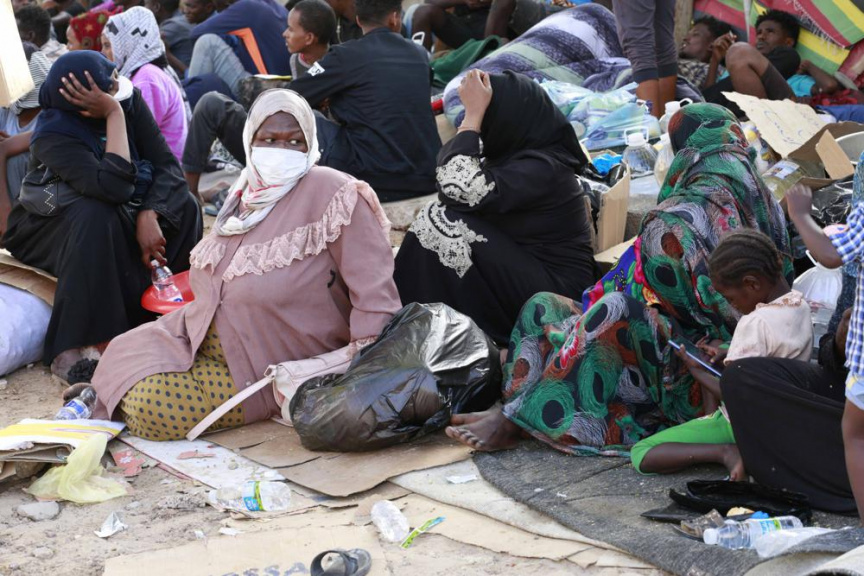 Dozens of migrants protest, Saturday, Oct. 9, 2021, in front of the office of the United Nation’s humanitarian body in Tripoli, Libya. (AP Photo/Yousef Murad)

ABOARD GEO BARENTS (AP) — Guards at a Libyan detention center for migrants shot and killed at least six people amid chaos in the overcrowded facility, U.N. officials said Saturday as they again condemned widespread abuses against migrants in the North African country.

The development comes a week after authorities rounded up more than 5,000 migrants in a massive crackdown and after U.N.-commissioned investigators said abuses and ill treatment of migrants in Libya amount to crimes against humanity.

The shooting took place Friday in the Mabani detention center west of the capital, Tripoli, where authorities earlier this month brought 4,187 new detainees, including 511 women and 60 children, according to the International Organization for Migration.

A spokesman for Libya’s Interior Ministry, which oversees migrant detention centers, did not respond to requests for comment.

The IOM said guards started shooting following a riot and an attempted escape by migrants.

Cochetel urged the European Union and U.N. to impose sanctions on those implicated in the abuses against migrants, especially after the findings of U.N.-commissioned investigators.

“Some individuals bear special responsibility for the human rights abuses committed either because they are directly involved in them or because they cover them under their authority. It is time for the U.N. and the EU sanctions committee to take action and list some individuals,” he told The Associated Press.

Peter Stano, the EU commission spokesperson for foreign affairs, said commission members “condemn this incident and expect its full investigation.” He declined to comment further, pending further clarification on what had happened.

Federico Soda, the head of IOM’s mission in Libya, said at least six migrants were killed by guards, and at least 15 others were injured and taken to hospitals.

“The use of excessive force and violence often resulting in death is a regular occurrence in Libyan detention centers,” Soda said. “Some of our staff who witnessed this incident describe injured migrants in a pool of blood lying on the ground. We are devastated by this tragic loss of life.”

Footage circulated online purporting to show hundreds of migrants fleeing the detention center through a gap in the facility fence. Some were seen helping fellow migrants who were hurt. Other videos showed large numbers of migrants running through the streets in Tripoli.

Gabriel Akoulong, 24, of Cameroon, was among the fleeing migrants. He was detained in the crackdown in the western town of Gargaresh, a major hub for migrants in Libya, and imprisoned in Mabani.

“They put us into crowded cells where we couldn’t even breathe. There was no food, no water, no oxygen,” he said.

During the escape, some migrants fell and were caught by Libyan guards who beat them. Some of the migrants trying to flee were shot, he said.

“I still ask myself why we have been detained and imprisoned,” he told the AP in a phone interview from Tripoli where he was in hiding.

Earlier this week, many migrants attempted to flee from the the Mabani center, but they were met “with extreme violence,” said medical aid group Doctors without Borders, which was granted a rare visit to the center.

The group, also known by its French acronym MSF, said its visiting team “heard two rounds of heavy gunfire at very close range and witnessed the indiscriminate beating of a group of men who were later forced into vehicles and driven to an unknown destination.”

More than 5,000 migrants were rounded up in the crackdown earlier this month, including 215 children and more than 540 women, at least 30 of whom were pregnant, according to the IOM. The crackdown, which left one migrant dead and 15 injured, began Oct. 1 in Gargaresh and spread to surrounding areas.

Libyan authorities described the crackdown as a security operation against illegal migration and drug trafficking. But they made no mention of any traffickers or smugglers being arrested.

Hours before Friday’s chaos in Mabani, the U.N. refugee agency said authorities demolished many buildings and makeshift houses for migrants during the crackdown.

“The raids ... have created widespread panic and fear among asylum seekers and refugees in the capital,” the UNHCR said. Many migrants, including unaccompanied children and young mothers, have protested at the agency’s Community Day Center in Tripoli, demanding they be evacuated from Libya.

The UNHCR said it temporality suspended its activities in the center after two of its workers were injured.

Libya has been engulfed in chaos since a NATO-backed uprising toppled and killed longtime dictator Moammar Gadhafi in 2011. The county has since emerged as migrant hub for those fleeing poverty and civil war in Africa and the Middle East and hoping a better life in Europe.

Thousands of migrants have been intercepted at the Mediterranean Sea and returned to Libya’s detention centers, which are rife with widespread abuses, torture and sexual violence. The IOM says around 10,000 migrants, including women and children, are being held in “grim conditions” in the centers.

U.N.-commissioned investigators said violations against migrants at sea, in detention centers and at the hands of traffickers amount to crimes against humanity.