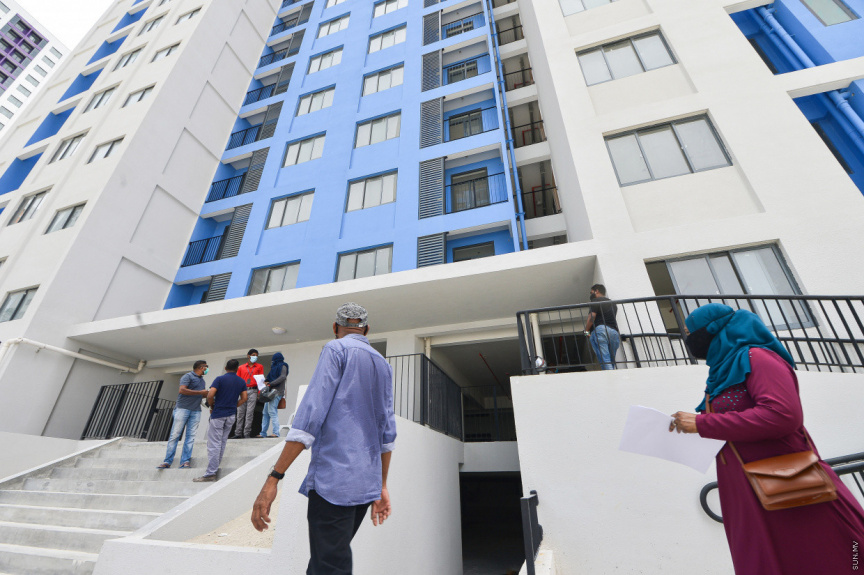 People enter a tower built under the Hiyaa Housing Project in Hulhumale' Phase 2 on July 14, 2021, after receiving the key to their respective units. (Sun Photo/Fayaz Moosa)

Male’ Water and Sewerage Company (MWSC) has stated that they probing to find out why the water bills of some Hiyaa Flat units are unusually high.

Answering a question posed by Sun regarding concerns that had recently come to light over the unusually high water bills of some Hiyaa Flat units – MWSC’s Managing Director Hassan Shah stated that the Company had also noticed the issue.

Noting that none of the bills had been sent to such units yet – Shah said it was the Company that took the initiative to reach out to the customers via phone call in order to inform them that their water bills were unusually high. In this regard, Shah added that the Company had requested the customers to inspect whether there was a leak in the unit during these calls.

“Because it had seemed like water was excessively used based off some the bills – we took the initiative to call the customers and bring it to their attention,” he had said.

Shah further explained that MWSC was investigating the matter further – in this regard, how the tenants of these units had used water, and how much.

The rent of Hiya Flat units is scheduled to be enforced starting from December.