President: Our lives at stake if we fail to repair damages to environment and biodiversity 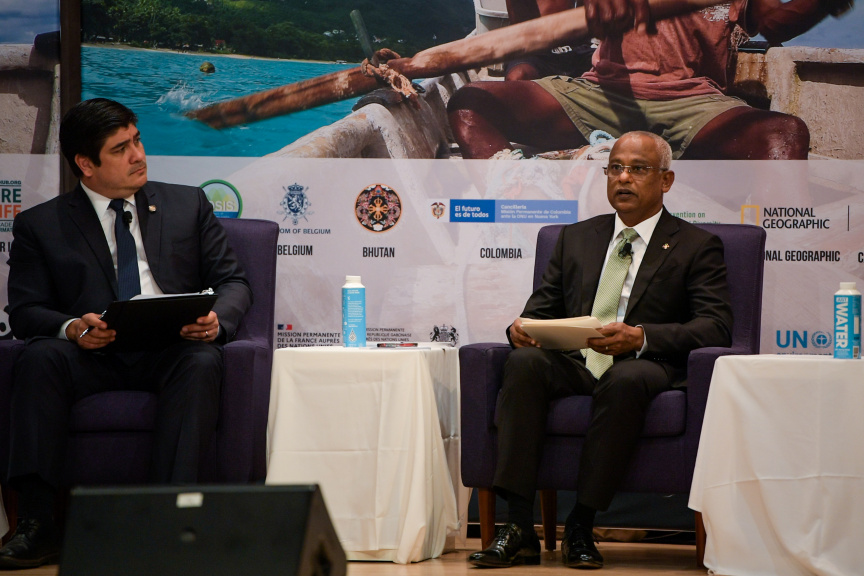 President Ibrahim Mohamed Solih speaks at the High-Level Event on Transformative Action for Nature and People on September 22, 2021. (Photo/President's Office)

President Ibrahim Mohamed Solih has stated that our lives are at stake if we fail to restore and repair the damages to the environment and biodiversity.

He had remarked this whilst speaking at the High-Level Event on Transformative Action for Nature and People in the margins of the 76th Session of the United Nations General Assembly, currently ongoing in New York City.

In this regard, President Solih called on world leaders to make strong commitments to address climate change, protect biodiversity and align policies and economic strategies with these commitments – noting that regardless of the continuous changes to the earth – our livelihoods are dependent on it.

"Our heating planet is not mincing its words. Let there be no confusion – we are responsible for this, and we must take urgent action to address it. It is our duty to restore and repair the damage that we have inflicted on our home,” he had said.

In line with this – President Solih briefed the audience on the policies adopted by the Maldives to build climate resilience and combat biodiversity loss, including the National Biodiversity Strategy and Action Plan and the plan to phase out single-use plastics by 2023. He also noted that the country is on track to reduce carbon emissions by a quarter by 2030 – adding that with sufficient international support, it is possible to accelerate the plan to net-zero by 2030.

"We must protect our environment and biodiversity, for if we do not, our very lives are at stake,” he stressed before concluding his address.

Transformative Action for Nature and People high-level event is a platform for government partners and leaders to present policies and action plans to protect, conserve, sustainably use and restore the loss of biodiversity, address climate change and reduce marine pollution. The initiative goes out from a cross-regional group of countries and partners from around the world.