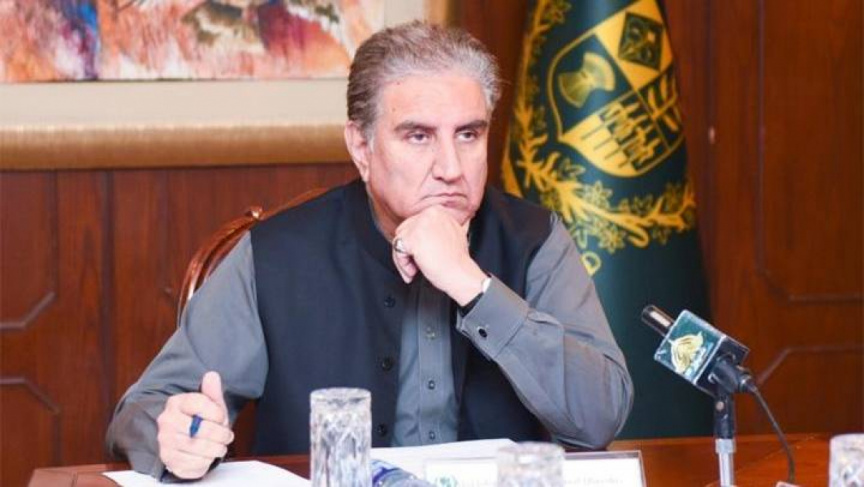 Pakistan’s Foreign Minister Makhdoom Shah Mahmood Qureshi has called on the international community to not repeat the precipitous actions taken against Afghanistan in the past that deepened the fissures in the country – and instead stay the course and help them avert an economic and humanitarian disaster.

Minister Qureshi said this in an article written by him on UAE’s Khaleej Times – addressing the Afghan crisis.

In his article – Minister Qureshi noted that Afghanistan is a deeply wounded entity that needs healing, stressing to desist from cynical actions that stultify the process of Afghan stabilization.

“To the international community, we say: stay the course and help Afghanistan avert an economic and humanitarian disaster. Do not repeat the precipitous actions of the past which deepened the fissures in the Afghan society that were exacerbated by military action, mismanagement, corruption, and squandering of fantastical sums of western taxpayers' money. Incentivize through constructive engagement and positive messaging,” he had said.

Additionally, Minister Qureshi stated that Pakistan has suffered the most from the Afghan crisis – after Afghanistan itself. In this regard, he detailed that Pakistan has endured 80,000 casualties and also incurred economic losses valued over at USD 150 million.

Minister Qureshi said that despite this – Pakistan continues to host approximately four million Afghani refugees, in addition to its own population.

He also noted that as an immediate neighbor of Afghanistan – Pakistan never had the inclination, nor the option, to walk away.

In this regard, Minister Qureshi highlighted that Pakistan has kept its embassy and consulates in Afghanistan open. In addition to this, Pakistan’s national airline – Pakistan International Airlines – has assisted in the evacuation of personnel from diplomatic missions, international organizations, INGOs, and media entities.

Noting that Afghan crisis’ worsening and continuation had nothing to do with Pakistan – Minister Qureshi said that even despite this, Pakistan did commit to do what they can to help bring about a negotiated end to this 20-year long “forever war”.

Accordingly, he highlighted that Pakistan had facilitated the peace process – and is striving for a regional approach on Afghanistan. In addition to this, Pakistan had also reached out to Western countries and all Afghan political factions for negotiations.

Noting that Pakistan’s Prime Minister Imran Khan’s vision for the country is centered on economic security – Minster Qureshi said in order to achieve this, Pakistan desires regional peace and prosperity as well as international security and stability.

He also noted that Pakistan’s policy shift from geopolitics to geoeconomics in line with this vision – will assist the realization of mutual connectivity agenda amongst the region – leading to regional economic integration.

If such a change is brought upon regionally – Minister Qureshi says that it will help Afghanistan make a genuine transition from a fractured and mal-administered entity to a responsible member of the international community.

“Helping Afghanistan would help prevent an economic meltdown and a refugee crisis. Financial measures at this stage would add to the suffering of common Afghans. We should extend our hands to lift them up, not to choke them,” he added.

In concluding his writing, Minister Qureshi urged all responsible entities to mitigate the pain and suffering of Afghanistan – by learning from past mistakes and not repeating them.

“Let us rise above geopolitics and try to mitigate the pain and suffering of Afghanistan. Pakistan urges all responsible actors to learn from past mistakes and let us not repeat them. We must not be prescriptive in our approach. Let us seize the opportunity to usher in an era where a stable and peaceful Afghanistan helps us unlock the true potential of the region,” he had said.

Emboldened by the withdrawal of the US and other international forces from Afghanistan, the Taliban – a militant group – swept across the country in just 10 days, taking their first provincial capital on 6 August. By 15 August, they were at the gates of the capital city, Kabul.

Their lightning advance prompted tens of thousands of people to abandon their homes in an attempt to flee to other countries – including the country's President Ashraf Ghani, who had fled the country prior to the capture of Kabul.

Following Kabul’s capture – the Taliban have declared a new government in Afghanistan called the Islamic Emirate of Afghanistan.

Taliban governed Afghanistan between 1996 and 2001. During this time, they were accused of various human rights violations and cultural abuses – especially towards women. In 2001, the militant group was driven out of power by US forces.