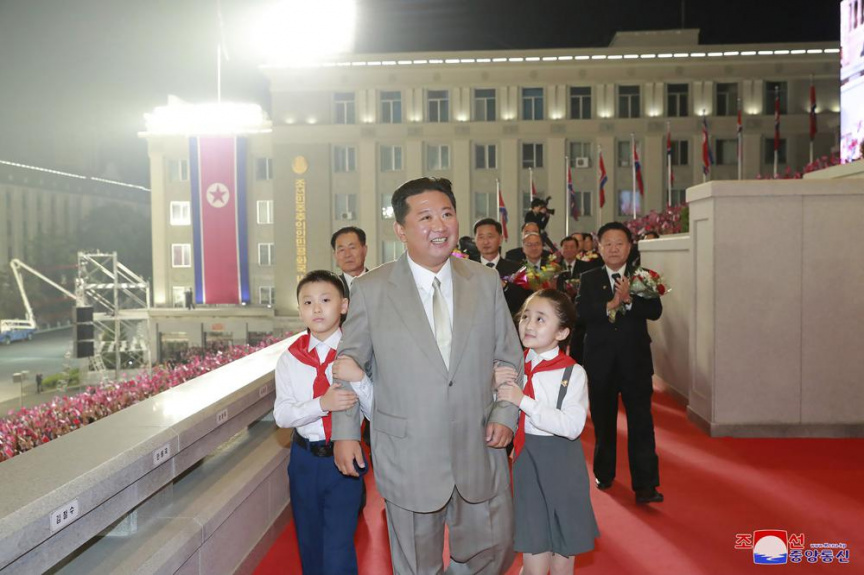 During the event that started late Wednesday, Kim, wearing a cream suit and a shiny white tie, emerged as the clock struck midnight. He beamed in response to thunderous applause from performers and spectators filling Pyongyang’s brightly illuminated Kim Il Sung Square, named after his grandfather and founder of the nation on its 73rd anniversary.

He smiled widely, waved to the crowd and kissed children who presented him with flowers before taking his spot on a balcony to observe the parade. He laughed vigorously and applauded the marchers throughout the event, while chatting animatedly with senior officials.

It was a stark change from 2018, when TV footage showed him struggling to catch his breath while accompanying South Korean President Moon Jae-in on a short hike to North Korea’s Mount Paektu during a period of diplomatic engagement. Moon, who is three decades older than Kim, didn’t seemed fazed by the walk at all.

“His face is clearly thinner and he is moving much more vigorously,” said Park Won-gon, a professor of North Korea studies at Seoul’s Ewha Womans University.

Kim’s weight loss became noticeable in June, when he made his first public appearance in weeks to convene a ruling party meeting. Some North Korea watchers then said that Kim, who is about 170 centimeters (5 feet, 8 inches) tall and has previously weighed 140 kilograms (308 pounds), may have lost 10-20 kilograms (22-44 pounds).

Most experts say Kim’s weight loss is more likely a result of efforts to improve his shape than an indicator of health problems, considering his regular public activity. It may also have a political purpose.

Kim is facing perhaps his toughest moment as he approaches a decade of rule, with North Korea wrestling with U.S.-led economic sanctions over its nuclear weapons, pandemic border closures that cause further strain to its broken economy, and food shortages worsened by floods in recent summers.

It has become crucial for Kim to build an image as a young and vigorous leader who can steer the country out of trouble, analyst Park said. Such image-making efforts would align with the latest parade, which showcased civil defense units involved in efforts to rebuild the economy and communities destroyed by floods and emphasized a domestic message for unity.

Yang Moo-jin, a professor at the University of North Korean Studies in Seoul, said Kim, with his weight loss and cheerful demeanor at the parade, is likely trying to project an image of a “normal statesman” who engages with the public.

“He’s also a husband and a father of three children who is approaching his 40s, so it isn’t strange that he would care about his health,” Yang said.

Kim’s health is the focus of keen outside attention as the 37-year-old leader hasn’t publicly anointed a successor who would take control of North Korea’s advancing nuclear arsenal targeting Asian rivals and the American homeland. He has been known for heavy drinking and smoking and comes from a family with a history of heart problems. His grandfather and father, who ruled North Korea before him, both died of heart issues.

“Considering the North’s political system, where the supreme leader decides everything, Kim’s health is an extremely important security matter,” Park said. “It’s likely there were internal concerns that he was overweight, and it would have been important for Kim to reduce those concerns and present himself as a young and healthy leader who’s capable of doing things.”

Flight takes about 200 people out of Kabul