President: Funadhoo to be developed as the Shaviyani Atoll’s hub 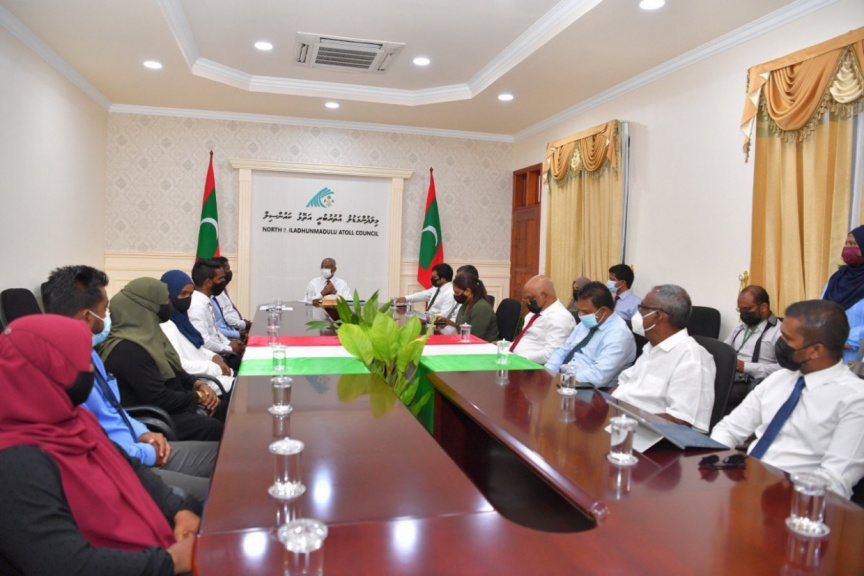 President Ibrahim Mohamed Solih has stated that the government plans to develop Sh. Funadhoo as the atoll’s hub.

President Solih said this whilst speaking at a meeting held with Sh. Funadho Council and the Women’s Development Committee – as part of the President and the First Lady’s ongoing tour of Shaviyani and Raa Atoll.

During the meeting – President Solih said that the government plans to develop Funadhoo as a focal point for the progress of the atoll through further development of the island’s harbour, hospital, school, airport and other public facilities.

Funadhoo Council also briefed President Solih on the most pertinent issues facing the residents of the island. In this regard, they stressed on the difficulties faced due to coastal erosion, land scarcity, and deterioration of the airport road.

Concerns were also expressed over the neighboring uninhabited island, Farukolhu, inquiring about the return of buildings currently being utilized as COVID-19 management facilities – for regular use.

The Women’s Development Committee also updated President Solih on their training programs and activities conducted for the progress and wellbeing of the island community. They also requested that a women’s center be established on the island that would help facilitate administering such activities.

In response to the concerns and suggestions made by the Council and the Women’s Development Committee – President Solih assured that the government will work collaboratively to find speedy solutions for these matters, especially that of coastal erosion and housing difficulties.

In this regard, he noted that the government would rebuild the airport road and also pointed the fact that Farukolhu is already under the Council's jurisdiction.

President Solih also added that development projects in Shaviyani Atoll that were delayed due to the COVID-19 pandemic will soon be reinitiated.

Funadhoo is the first destination in the President and the First Lady’s ongoing trip to eight islands in Shaviyani and Raa Atoll.