Rogers stuns No. 1 Barty in 3 sets to advance at U.S. Open 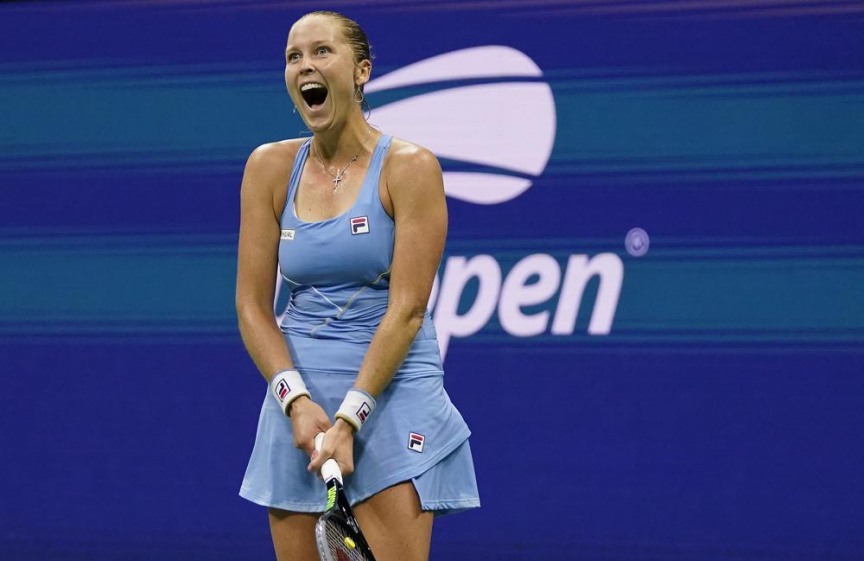 Shelby Rogers, of the United States, reacts after defeating Ashleigh Barty, of Australia, during the third round of the US Open tennis championships, Saturday, Sept. 4, 2021, in New York. (AP Photo/Frank Franklin II)

NEW YORK (AP) — Shelby Rogers lingered on the court and panned her phone around at the fans at Arthur Ashe Stadium for a snapshot souvenir of the scene after she beat Ash Barty for the first time.

Rogers was winless in five meetings — four this year — against the No. 1 player, forcing the last American left in the women’s draw to mix up her methodology.

Urged on by a raucous crowd, Rogers smacked moon balls, stayed patient — and waited as a rattled Barty hit a slew of unforced errors that led to another early exit at Flushing Meadows for the reigning Wimbledon champion.

“I just tried to get the crowd into it. I said, `You know what, if I’m going to go down, I’m going to give a last dying effort,’” she said.

She found her serve, tinkered with approach and steeled her will against the top player in the game and pulled off the improbable comeback.

“You find ways to stay in the present and stay not thinking about I’m down 5-2,” Rogers said.

Rogers had been 0-6 lifetime against top-seeded players.

Barty gave her plenty of help to end the streak. Barty had not dropped a set in the tournament but was sloppy from the start. She made 17 unforced errors in the first set and then three more when she held a 5-2 lead in the third that let Rogers back in. Rogers broke Barty twice in the third when Barty served for the match.

“I played a pretty awful first set in the sense where I was erratic,” Barty said. “I couldn’t quite find the rhythm of how I wanted to play.”

Rogers was a quarterfinalist in New York a year ago, while Barty owns titles from the French Open in 2019 and Wimbledon this July but never has been past the fourth round at Flushing Meadows.

Rogers laughed as she referenced the self-deprecating quote, “Nobody beats Vitas Gerulaitis 17 times in a row,” made after he finally beat Jimmy Connors.

Rogers didn’t have to last that long to snap her winless streak against Barty.

As they are for most Americans, the Ashe crowd roared for Rogers on every winner, and she waved her arms and exhorted the fans to get louder.

No fans were allowed to attend the U.S. Open a year ago because of the coronavirus pandemic.

“The crowd is next-level this year,” Rogers told the fans at Arthur Ashe Stadium. “You’ve picked who you want to win, so thank you for picking me tonight.”

Barty was unable to avoid the rash of upsets that have hit the tournament. A day after defending champion Naomi Osaka and two of the top five men, Stefanos Tsitsipas and Andrey Rublev were beaten, Barty went down to the 43rd-ranked Rogers.

Asked about Raducanu, Rogers -- who placed her hands on her head in amazement and blew kisses to the crowd after the win -- wanted to talk about the win.

She even apologized to fellow American Jack Sock, who was on-deck to play Alexander Zverev at Ashe. She needed 2 hours, 8 minutes to beat Barty and she wanted a few more moments to soak in the win.

“Jack, I know you want to play, but I kind of want to stay out here,” she said.

She laughed when she had no idea the moderator in charge of the session with reporters was trying to ask her about her week in New York.

“I’m not used to this press conference thing, sorry,” she said, laughing.

The 25-year-old Barty became the first Australian woman to win Wimbledon since Evonne Goolagong Cawley in 1980 and has won five titles overall this year.

Pretty good. But not good enough in New York.

“I just didn’t quite have enough in the tank,” she said. “I’ve left everything out on the court this year. It was no different tonight.”

Alcaraz, 18, upends Tsitsipas at US Open; Osaka out