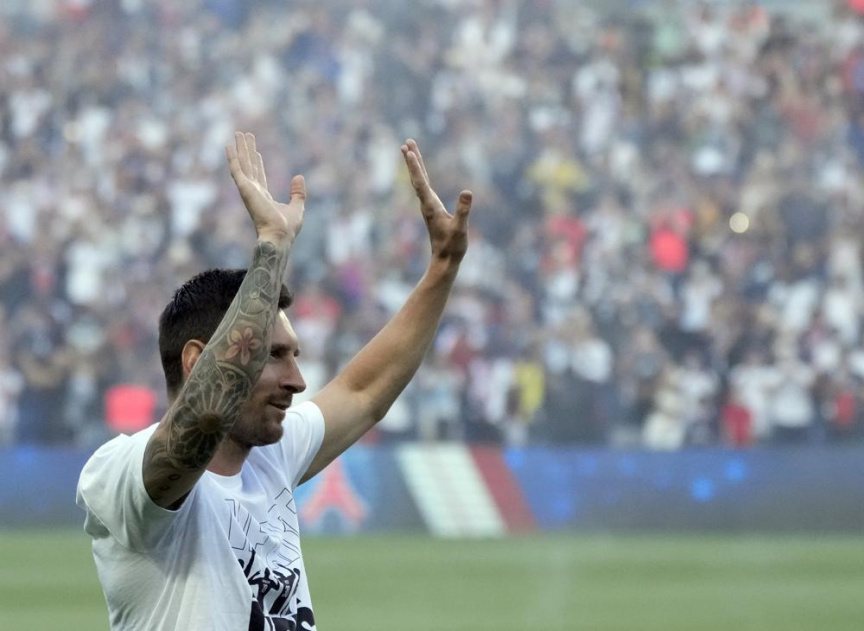 PSG’s latest signing joined four other recruits presented on the field to some 49,000 fans at Parc des Princes before kickoff.

Messi was not in the actual squad for the game, which saw PSG coasting at 3-0 only to get pegged back to 3-2 until a late red card for Strasbourg eased the pressure.

Icardi scored after three minutes, Kylian Mbappe found the net with a heavily deflected shot leading to an own-goal, and Mbappe’s deflected cross allowed Germany midfielder Julian Draxler to make it 3-0 in the 27th minute.

Former PSG forward Kevin Gameiro headed home for the visitors in the 53rd. Imposing striker Ludovic Ajorque’s even better header midway through the second half pulled it back to 3-2, drawing some whistles from the home crowd.

But after Strasbourg defender Alexander Djiku was sent off in the 82nd, Mbappe set up winger Pablo Sarabia from close range for PSG’s fourth goal.

Messi watched it all from the stands alongside his new and former teammate Neymar, who won the Champions League alongside Messi at Barcelona in 2015.

Messi only recently returned from an extended holiday after helping Argentina win the Copa America, where his side beat Neymar’s Brazil in the final.

Although Messi has started training with PSG, he is not yet match fit.

In a scene which few could have predicted even recently, former Real Madrid captain Sergio Ramos applauded Messi — his eternal Barcelona nemesis and the all-time record scorer in “Clasicos” between Barcelona and Madrid — as he joined him on the podium.

But nothing compared to the huge one reserved for Messi, a four-time Champions League and six-time Golden Ball winner.

He joined PSG on a two-year deal this week after his new deal with Barcelona sensationally collapsed and left him in tears as PSG moved quickly.

Lille clawed back from 3-1 down to draw 3-3 last weekend, but there was no comeback this time as Gouiri made it 3-0 from the penalty spot shortly after the break and Dolberg headed in his second midway through the second half.

But Lille was not keen on letting him leave one year before the end of his contract, and Nice had to pay 4 million euros ($4.7 million) in compensation. This created tense relations between Galtier and Lille president Olivier Letang.

It must have been a strange sight for Galtier as the league trophy he won, and the recent Champions Trophy, were presented to the home fans.

They were soon in despondent mood as Nice went 2-0 up.

Playing his first match since scoring three goals for Denmark at Euro 2020, Dolberg found the net in the first minute from close range.

Poor defending from Zeki Celik under pressure from Dolberg resulted in Gouri setting up Boudaoui and he smacked a firm shot past Lille’s new goalkeeper Leo Jardim — who has conceded seven in two games since replacing Mike Maignan.

Marseille hosts Bordeaux in the pick of Sunday’s games.

Monaco lost 1-0 at Lorient on Friday and has only one point from its opening two games, having finished third last season.

Goal feast for fans as Man U, Chelsea, Liverpool win