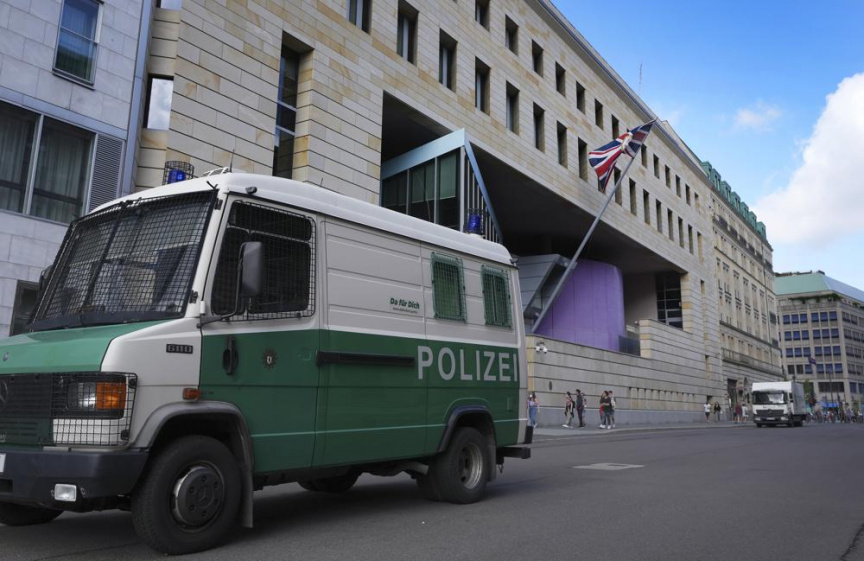 A police car is parked in front of the British embassy in Berlin, Germany, Wednesday, Aug. 11, 2021. (AP Photo/Michael Sohn)

BERLIN (AP) — Germany has arrested a British citizen on suspicion of spying for Russia while working at the British Embassy in Berlin, officials said Wednesday.

Federal prosecutors said in a statement that the man was detained on Tuesday in the city of Potsdam southwest of the capital based on cooperative investigations by German and British authorities. In keeping with German privacy laws, he was only identified as David S.

Prosecutors said he is suspected of having spied for the Russian intelligence service at least since November. Before his arrest, he worked as a local hire at the British Embassy in the German capital and allegedly passed on documents he received at work to the Russians, the prosecutors’ statement said.

It’s unlikely the suspect had diplomatic immunity because in such a case he would have normally been expelled from the country instead of being detained.

The federal prosecutor’s office said later on Wednesday, when reached by phone, it could not give any further details on the case because of the ongoing investigation and the man’s privacy rights.

“We take the information that the detained person’s intelligence activity was carried out on behalf of a Russian intelligence agency extremely seriously,” Heiko Maas told reporters in Berlin.

“Spying on a close ally on German soil is absolutely unacceptable and we are in full solidarity with our British friends,” he said. “We will be following the federal prosecutors’ further investigations very closely. And where that’s desired, necessary and possible, we will also support them.”

The Russian Embassy in Berlin declined to comment Wednesday on reports about the arrest, the Interfax news agency reported. The embassy “currently does not have any official information from the German side on this issue,” Interfax quoted the embassy’s spokespeople as saying.

The British government provided few details about the embassy worker, saying that “an individual who was contracted to work for the government was arrested yesterday by the German authorities.”

“It would not be appropriate to comment further as there is an ongoing police investigation,” the statement said.

Britain’s Metropolitan Police said in a separate statement that “the man was arrested in the Berlin area on suspicion of committing offenses relating to being engaged in ‘Intelligence Agent activity’.”

The Met’s Counter Terrorism Command is responsible for investigating alleged breaches of the Official Secrets Act.

German prosecutors said the suspect received an unknown amount of cash in return for his alleged spying activities. Investigators have searched his home and office, the statement added.

A federal judge on Wednesday ordered the man to remain under arrest pending further investigation.

During the Cold War, Berlin was often dubbed as “the capital of spies” because the city was on the frontlines of the confrontation between the Soviets in the East and the Americans and their western allies in the West. Intelligence agents were active on both sides of the divided city and sometimes — after some espionage agents were caught — there were infamous cloak-and-dagger exchanges of captured spies on the Glienicker Bridge.

However, since the fall of the Berlin Wall in 1989, the unification of Germany a year later, and the end of the Cold War, espionage activities in Berlin have supposedly abated.