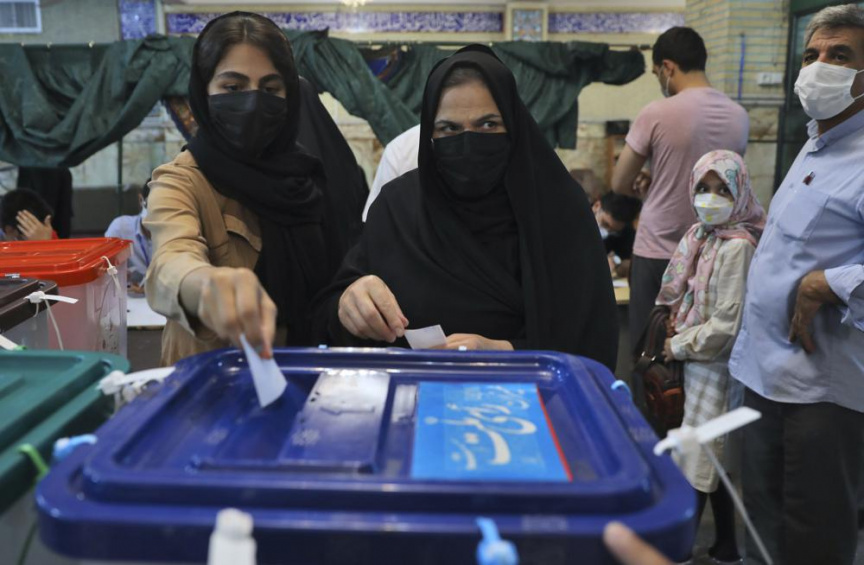 Voters cast their ballots for the presidential elections at a polling station in Tehran, Iran, Friday, June 18, 2021. Iranians voted Friday in a presidential election dominated by a hard-line protege of Supreme Leader Ayatollah Ali Khamenei after authorities disqualified nearly all of his strongest competition, leading to what appeared to be a low turnout fueled by apathy and calls for a boycott. (AP Photo/Vahid Salemi)

Opinion polling by state-linked organizations, along with analysts, indicated that judiciary chief Ebrahim Raisi — who already is under U.S. sanctions — was the front-runner in a field of only four candidates. Former Central Bank chief Abdolnasser Hemmati is running as the moderate candidate but hasn’t inspired the same support as outgoing President Hassan Rouhani, who is term-limited from seeking the office again.

As night fell, turnout appeared far lower than in Iran’s last presidential election in 2017. At one polling place inside a mosque in central Tehran, a Shiite cleric played soccer with a young boy as most of its workers napped in a courtyard. At another, officials watched videos on their mobile phones as state television blared beside them, offering only tight shots of locations around the country — as opposed to the long, snaking lines of past elections.

Balloting came to a close at 2.a.m. Saturday, after the government extended voting to accommodate what it called “crowding” at several polling places nationwide. Paper ballots, stuffed into large plastic boxes, were to be counted by hand through the night, and authorities said they expected to have initial results and turnout figures Saturday morning at the earliest.

“My vote will not change anything in this election, the number of people who are voting for Raisi is huge and Hemmati does not have the necessary skills for this,” said Hediyeh, a 25-year-old woman who gave only her first name while hurrying to a taxi in Haft-e Tir Square after avoiding the polls. “I have no candidate here.”

Iranian state television sought to downplay the turnout, pointing to the Gulf Arab sheikhdoms surrounding it ruled by hereditary leaders and the lower participation in Western democracies. After a day of amplifying officials’ attempts to get out the vote, state TV broadcast scenes of jam-packed voting booths in several provinces overnight, seeking to portray a last-minute rush to the polls.

But since the 1979 revolution overthrew the shah, Iran’s theocracy has cited voter turnout as a sign of its legitimacy, beginning with its first referendum that won 98.2% support that simply asked whether or not people wanted an Islamic Republic.

The disqualifications affected reformists and those backing Rouhani, whose administration both reached the 2015 nuclear deal with world powers and saw it disintegrate three years later with then-President Donald Trump’s unilateral withdrawal of America from the accord. Former hard-line President Mahmoud Ahmadinejad, also blocked from running, said on social media he’d boycott the vote.

Voter apathy also has been fed by the devastated state of the economy and subdued campaigning amid months of surging coronavirus cases. Poll workers wore gloves and masks, and some wiped down ballot boxes with disinfectants.

If elected, Raisi would be the first serving Iranian president sanctioned by the U.S. government even before entering office over his involvement in the mass execution of political prisoners in 1988, as well as his time as the head of Iran’s internationally criticized judiciary — one of the world’s top executioners.

It also would put hard-liners firmly in control across the government as negotiations in Vienna continue to try to save a tattered deal meant to limit Iran’s nuclear program at a time when Tehran is enriching uranium at its highest levels ever, though it still remains short of weapons-grade levels. Tensions remain high with both the U.S. and Israel, which is believed to have carried out a series of attacks targeting Iranian nuclear sites as well as assassinating the scientist who created its military atomic program decades earlier.

Whoever wins will likely serve two four-year terms and thus could be at the helm at what could be one of the most crucial moments for the country in decades — the death of the 82-year-old Khamenei. Speculation already has begun that Raisi might be a contender for the position, along with Khamenei’s son, Mojtaba.

Khamenei cast the first vote from Tehran, urging the public to “go ahead, choose and vote.”

Raisi, wearing a black turban that identifies him in Shiite tradition as a direct descendant of Islam’s Prophet Muhammad, voted from a mosque in southern Tehran. The cleric acknowledged in comments afterward that some may be “so upset that they don’t want to vote.”

“I beg everyone, the lovely youths, and all Iranian men and women speaking in any accent or language from any region and with any political views, to go and vote and cast their ballots,” Raisi said.

But few appeared to heed the call. There are more than 59 million eligible voters in Iran, a nation of over 80 million people. However, the state-linked Iranian Student Polling Agency has estimated a turnout will be just 44%, which would be the lowest since the revolution. Officials gave no turnout figures Friday, though results could come Saturday.

Fears about a low turnout have some warning Iran may be turning away from being an Islamic Republic — a government with elected civilian leadership overseen by a supreme leader from its Shiite clergy — to a country more tightly governed by its supreme leader, who already has final say on all matters of state and oversees its defense and atomic program.

“This is not acceptable,” said former President Mohammad Khatami, a reformist who sought to change the theocracy from the inside during eight years in office. “How would this conform to being a republic or Islamic?”

For his part, Khamenei warned of “foreign plots” seeking to depress turnout in a speech Wednesday. A flyer handed out on the streets of Tehran by hard-liners echoed that and bore the image of Revolutionary Guard Gen. Qassem Soleimani, who was killed in a U.S. drone strike in 2020. A polling station was set up by Soleimani’s grave on Friday.

Some voters appeared to echo that call.

“We cannot leave our destiny in the hands of foreigners and let them decide for us and create conditions that will be absolutely harmful for us,” said Tehran voter Shahla Pazouki.

Also hurting a moderate like Hemmati is the public anger aimed at Rouhani over the collapse of the deal, despite ongoing talks in Vienna to revive it. Iran’s already-ailing economy has suffered since, with double-digit inflation and mass unemployment.

“It is useless,” said Ali Hosseini, a 36-year-old unemployed resident in southern Tehran, about voting. “Anyone who wins the election after some time says he cannot solve problem of the economy because of intervention by influential people. He then forgets his promises and we poor people again remain disappointed.”