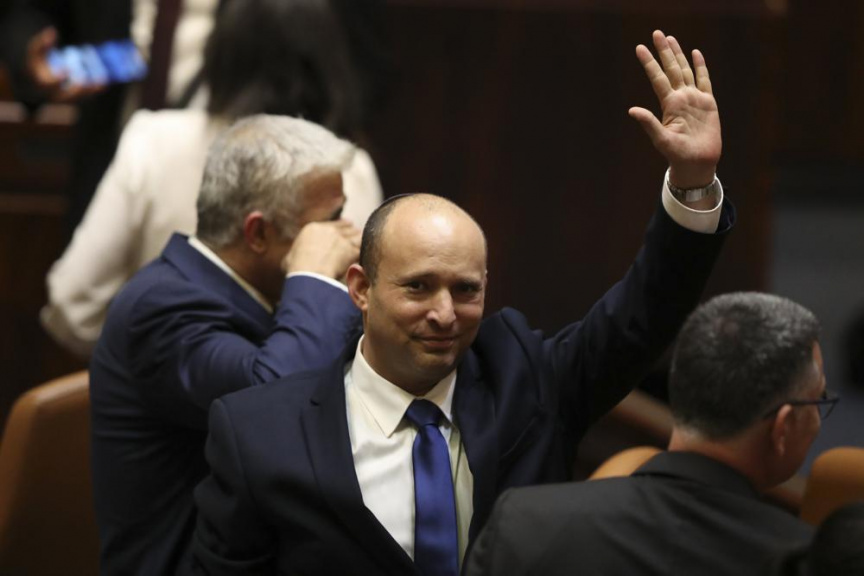 Naftali Bennett, a former ally of Netanyahu turned rival, became prime minister after the 60-59 vote. Promising to try to heal a divided nation, Bennett will preside over a diverse and fragile coalition comprised of eight parties with deep ideological differences.

But the 71-year-old Netanyahu made clear he has no intention of exiting the political stage. “If it is destined for us to be in the opposition, we will do it with our backs straight until we topple this dangerous government and return to lead the country,” he said.

The vote, capping a stormy parliamentary session, ended a two-year cycle of political paralysis in which the country held four deadlocked elections. Those votes focused largely on Netanyahu’s divisive rule and his fitness to remain in office while on trial for corruption charges.

To his supporters, Netanyahu is a global statesman uniquely capable of leading the country through its many security challenges.

But to his critics, he has become a polarizing and autocratic leader who used divide-and-rule tactics to aggravate the many rifts in Israeli society. Those include tensions between Jews and Arabs, and within the Jewish majority between his religious and nationalist base and his more secular and dovish opponents.

Outside the Knesset, hundreds of protesters watching the vote on a large screen erupted into applause when the new government was approved. Thousands of people, many waving Israeli flags, celebrated in central Tel Aviv’s Rabin Square.

“I look forward to working with Prime Minister Bennett to strengthen all aspects of the close and enduring relationship between our two nations,” he said in a statement. He said his administration is fully committed to working with the new government “to advance security, stability, and peace for Israelis, Palestinians, and people throughout the broader region.”

Bennett’s office said he later spoke by phone with Biden, thanking him for his warm wishes and longstanding commitment to Israel’s security.

The leaders agreed to consult closely on all matters related to regional security, including Iran, the White House said, adding that Biden said his administration intends to work closely with the Israeli government on advancing peace, security and prosperity for Israelis and Palestinians.

Much of the Israeli opposition to Netanyahu was personal. Three of the eight parties in the new government, including Bennett’s Yamina, are headed by former Netanyahu allies who share his hard-line ideology but had deep personal disputes with him.

Bennett, 49, is a former chief of staff to Netanyahu whose small party is popular with religious Jews and West Bank settlers. As he addressed the raucous debate, he was repeatedly heckled and shouted down by Netanyahu’s supporters. Some were removed from the chamber.

Bennett, an observant Jew, noted the Jewish people twice lost their homeland in biblical times due to bitter infighting.

“This time, at the decisive moment, we have taken responsibility,” he said. “To continue on in this way -- more elections, more hatred, more vitriolic posts on Facebook -- is just not an option. Therefore we stopped the train, a moment before it barreled into the abyss.”

The new Cabinet met briefly, and Bennett recited a prayer for new beginnings and said it was time to mend rifts. “Citizens of Israel are all looking to us now, and the burden of proof is upon us,” Bennett said.

The millionaire former high-tech entrepreneur faces a tough test maintaining an unwieldy coalition from the political right, left and center.

The coalition, including a small Islamist faction that is making history as the first Arab party to sit in a coalition, agree on little beyond their opposition to Netanyahu. They are likely to pursue a modest agenda that seeks to reduce tensions with the Palestinians and maintain good relations with the U.S. without launching any major initiatives.

“We will forge forward on that which we agree -- and there is much we agree on, transport, education and so on, and what separates us we will leave to the side,” Bennett said. He also promised a “new page” in relations with Israel’s Arab sector.

Israel’s Arab citizens make up about 20% of the population but have suffered from discrimination, poverty and lack of opportunities. Netanyahu has often tried portray Arab politicians as terrorist sympathizers, though he also courted the same Arab party in a failed effort to remain in power after March 23 elections.

Bennett, who like Netanyahu opposes the establishment of a Palestinian state, made little mention of the Palestinians beyond threatening a tough response to violence. He also vowed, like Netanyahu, to oppose U.S.-led efforts to restore the international nuclear accord with Iran.

“Israel will not allow Iran to arm itself with nuclear weapons,” he said. “Israel is not party to the agreement and will maintain full freedom to act.”

But he also thanked Biden for his support of Israel. He promised to take a different approach than Netanyahu, who has alienated much of the Democratic Party through his antagonistic relationship with then-President Barack Obama and close ties with former President Donald Trump.

“My government will make an effort to deepen and nurture relations with our friends in both parties -- bipartisan,” Bennett said. “If there are disputes, we will manage them with fundamental trust and mutual respect.”

While Bennett’s speech was conciliatory, Netanyahu’s was confrontational. He boasted of his achievements, including diplomatic treaties with four Arab states and a successful coronavirus vaccination drive, before belittling the man who is replacing him.

He accused Bennett of abandoning Israel’s right-wing electorate and joining weak “leftists” to become prime minister. He said Bennett did not have the backbone to stand up to Iran or pressure from the U.S. to make concessions to the Palestinians.

“I will lead you in the daily struggle against this evil and dangerous leftist government in order to topple it,” he said. “God willing, it will happen a lot faster than what you think.”

In the opposition, Netanyahu remains head of the largest party in parliament. The new coalition is a patchwork of small and midsize parties that could collapse if any of its members decide to bolt. Bennett’s party, for instance, holds just six seats in the 120-seat parliament.

Yohanan Plesner, president of the Israel Democracy Institute, a nonpartisan think tank, said the new government will likely be more stable than it appears.

Each party in the coalition will want to prove that it can deliver. For that, they need “time and achievements,” he said. Still, Netanyahu “will continue to cast a shadow,” Plesner said.

The driving force behind the coalition is Yair Lapid, a political centrist who will become prime minister in two years in a rotation agreement with Bennett, if the government lasts.

Lapid called off a planned speech, saying he was ashamed his 86-year-old mother had to witness the raucous behavior of his opponents.

“I wanted her to be proud of the democratic process in Israel. Instead she, along with every citizen of Israel, is ashamed of you and remembers clearly why it’s time to replace you,” he said.

Netanyahu’s place in Israeli history is secure, having served as prime minister for a total of 15 years — more than any other, including the country’s founding father, David Ben-Gurion.

But his reputation as a political magician has faded -- particularly since he was indicted in 2019 for fraud, breach of trust and accepting bribes.

He refused calls to step down, instead lashing out at the media, judiciary and law enforcement, going so far as to accuse his political opponents of orchestrating an attempted coup. Last year, protesters began holding weekly rallies across the country calling on him to resign.

Netanyahu remains popular among the hard-line nationalists who dominate Israeli politics, but he could soon face a leadership challenge from within his own party. A less polarizing Likud leader would stand a good chance of assembling the right-wing coalition that Netanyahu had hoped to form.