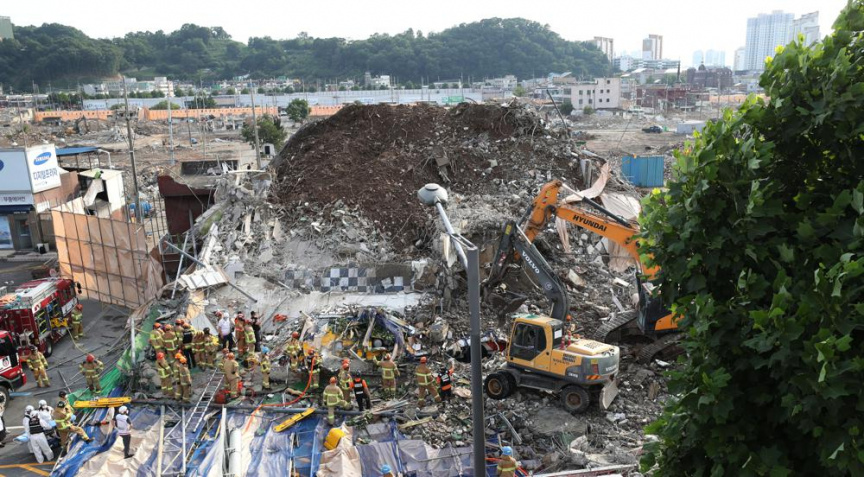 SEOUL, South Korea (AP) — A five-story building being demolished in southern South Korea collapsed on Wednesday, sending debris falling on a bus and killing nine people on board, officials said.

Concrete from the collapsed building in the southern city of Gwangju fell on the bus carrying 17 people which had stopped on a nearby street, the National Fire Agency said.

Emergency officers dispatched to the site rescued eight people from the bus, all seriously injured, before discovering the nine bodies, the agency said in a statement.

Fire officer Kim Seok-sun said in a televised briefing from the site that all workers at the building site had evacuated before its collapse. He said some of the workers told investigators that they had closed a pedestrian walkway near the building before the collapse.

Fire agency officials said emergency officers were still searching for any other people who might be trapped under the debris. The cause of the collapse wasn’t immediately known.

Kim said the bus driver was among the injured. Authorities didn’t immediately provide details of the other injured or dead people.

Local media showed the debris falling on the bus and engulfing the street in a huge cloud of dust. A video after the collapse showed dozens of rescue workers equipped with stretchers and crowbars searching for survivors while excavators hacked at a huge mountain of crumbled concrete and bent steel beams spilling over the motorway.

SKoreans abroad want probe into their past adoptions

China’s children may be next in line for vaccine