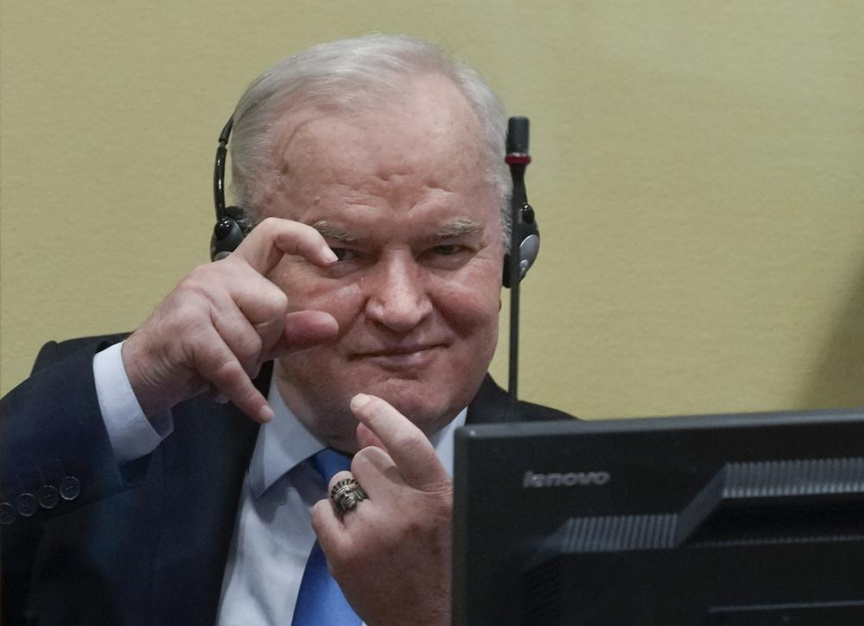 Former Bosnian Serb military chief Ratko Mladic imitates taking pictures as he sits the court room in The Hague, Netherlands, Tuesday, June 8, 2021, where the United Nations court delivers its verdict in the appeal of Mladic against his convictions for genocide and other crimes and his life sentence for masterminding atrocities throughout the Bosnian war. (AP Photo/Peter Dejong, Pool)

THE HAGUE, Netherlands (AP) — Ratko Mladic, the military chief known as the “Butcher of Bosnia” for orchestrating genocide, crimes against humanity and war crimes in the Balkan nation’s 1992-95 war, lost his final legal battle Tuesday when U.N. judges rejected his appeals and affirmed his life sentence.

The ruling involving his 2017 convictions and sentence closed a grim chapter in European history that included the continent’s first genocide since World War II — the 1995 Srebrenica massacre of more than 8,000 Muslim men and boys.

The now-frail Mladic, often belligerent at his court appearances in The Hague, showed no reaction other than a scowl as Presiding Judge Prisca Matimba Nyambe of Zambia said the panel had dismissed, by a vote of 4-1, his appeals of convictions for crimes including genocide, murder, extermination and terror for atrocities throughout the war that killed more than 100,000 and left millions homeless.

The 79-year-old former general is the last major figure to face justice from the conflict that ended more than a quarter century ago.

His former political chief, ex-Bosnian Serb President Radovan Karadzic, already is serving a life sentence after being convicted for the same crimes. Former Yugoslav President Slobodan Milosevic, who was accused of fomenting the ethnic conflicts that tore apart the Balkans in the 1990s, died in a U.N. cell in 2006 before judges at his trial could reach verdicts.

Serge Brammertz, the prosecutor who finally brought both Karadzic and Mladic to justice, said Mladic “ranks among the most notorious war criminals in modern history” who abused his position of power to commit crimes including genocide.

“Mladic should be condemned by all responsible officials in the former Yugoslavia and around the world,” Brammertz said. “His name should be consigned to the list of history’s most depraved and barbarous figures.”

U.S. President Joe Biden said the “historic judgment shows that those who commit horrific crimes will be held accountable. It also reinforces our shared resolve to prevent future atrocities from occurring anywhere in the world.”

“My thoughts today are with all the surviving families of the many victims of Mladic’s atrocities. We can never erase the tragedy of their deaths, but I hope today’s judgment provides some solace to all those who are grieving,” a statement from Biden said.

The court also rejected an appeal by prosecutors of Mladic’s acquittal on one other count of genocide linked to ethnic purges early in the war.

As commander of the Bosnian Serb Army, the once-swaggering Mladic led troops responsible for atrocities ranging from “ethnic cleansing” campaigns to the siege of Sarajevo and the war’s bloody climax in the 1995 Srebrenica massacre.

In Sarajevo, applause broke out among those watching the proceedings. Mayor Benjamina Karic called it “a day of justice” for Sarajevo, Bosnia and innocent victims of the war.

Mladic’s toxic legacy continues to divide Bosnia and his dark shadow has spread far beyond the Balkans.

To Serbs in Bosnia, he is a war hero who fought to protect his people. To Bosniaks, mostly Muslims, he will always be a villain responsible for their wartime suffering and losses.

Nedziba Salihovic, who lost her son and husband in the bloodshed, watched the court hearing on a large screen in Srebrenica.

“This means a lot to me, my heart is racing,” she said. “He was punished. It is not important where he’ll end up (to serve his sentence). Like mothers of Srebrenica, he’ll spend the rest of his life without his family.”

Bosnian Serb separatist leader Milorad Dodik blasted the final verdict as “selective justice” and “satanization of Serbs” which will only deepen the existing ethnic divide in Bosnia so many years after the war.

“The court did not prove Mladic’s direct guilt,” Dodik said. “It is clear that genocide in Srebrenica never happened.”

Mladic’s son, Darko, who was part of his defense team, said in The Hague: ”This traveling circus (the tribunal) has finished its job like it started. The general had no chance of a fair trial.”

Mladic was first indicted in July 1995. After the war in Bosnia ended, he went into hiding and was finally arrested in 2011 and handed over to the International Criminal Tribunal for the former Yugoslavia by the then-ruling pro-Western government of Serbia.

The judgment was welcomed as “an important affirmation of the rule of law” by Kathryne Bomberger, director-general of the International Commission on Missing Persons that helped locate and identify victims of atrocities in Bosnia.

“Ramifications of the judgment in case of Mladic and in previous cases, such as that of Radovan Karadzic, go beyond the Western Balkans. This gives hope to survivors of atrocity, including families of the missing and disappeared persons around the world, that justice can be delivered,” Bomberger said.

Amnesty International’s Europe Director Nils Muižniek said the ruling “sends a powerful message around the world that impunity cannot, and will not, be tolerated.”

Nedzad Avdic, who survived a mass execution in Srebrenica, said he was satisfied “even though nothing can erase what we’ve been through nor bring back our dead.”

The judgment “will make denying the crimes more difficult. This and other verdicts will be the starting point for anyone who cares about truth,” he added.

The shadow of Mladic and Karadzic has spread far beyond the Balkans. They have been revered by foreign far-right supporters for their bloody wartime campaigns.

The Australian who shot dead dozens of Muslim worshippers in Christchurch, New Zealand, in 2019 was believed to be inspired by the wartime Bosnian Serb leaders, as was Anders Breivik, the Norwegian white supremacist who killed 77 people in Norway in 2011.

The U.N. tribunal that initially indicted Mladic has since shut its doors. His appeal and other legal issues left over from the tribunal were being dealt with by the U.N.’s International Residual Mechanism for Criminal Tribunals, which is housed in the same building as the now-defunct court for the former Yugoslavia.

Outside the court, another mother from Srebrenica, Munira Subasic had a message for young people in Serbia and the Serb part of Bosnia.

She urged them to study the court’s judgments and indictments, and “stop hating and create a better future for themselves and our children.”

Hundreds of migrants freezing in snow in Bosnia camp