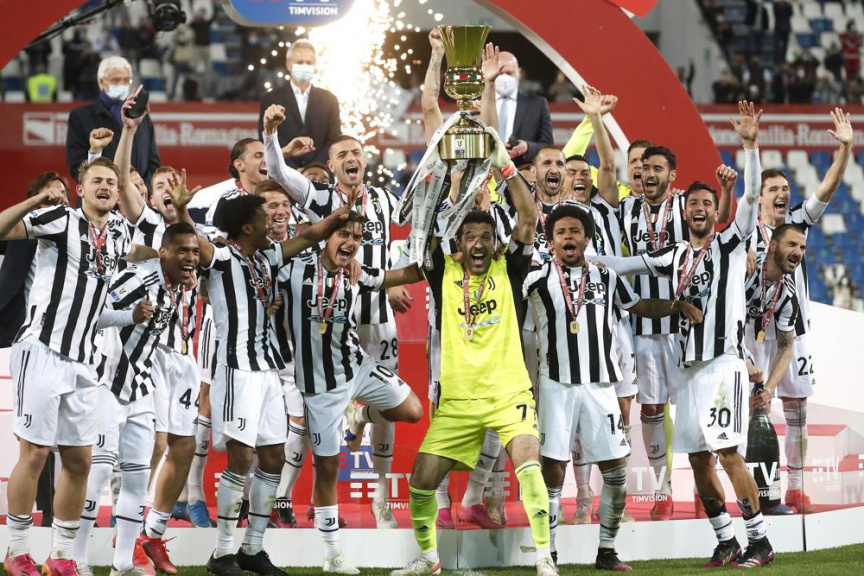 Juventus players celebrate with the winner's trophy their victory against Atalanta after the end of Italian Cup soccer final match between Atalanta and Juventus at the Mapei Stadium in Reggio Emilia, Italy, Wednesday, May 19, 2021. (AP Photo/Antonio Calanni)

REGGIO EMILIA, Italy (AP) — Gianluigi Buffon lifted the last trophy of his glittering Juventus career after his team beat Atalanta 2-1 in the Italian Cup on Wednesday to put some shine on a disappointing season.

It was a record-extending 14th Italian Cup title for Juventus, and a first for star forward Cristiano Ronaldo after the Bianconeri lost the final last year.

“Today was a great emotion. To finish like this makes me proud and I was delighted to share with my teammates many adventures up to this final,” the 43-year-old Buffon said. “The fans today were the icing on the cake.

“They, the Juventus people, the managers, the president and my teammates will always be a part of my life. I think I have given so much love, professionalism, pride and courage every time I took to the field with this shirt and I am proud of this.”

Fans were able to celebrate inside the stadium for one of the first times in Italy in more than a year. About 4,300 supporters were allowed to attend after the Italian government gave its approval for the Mapei Stadium in Reggio Emilia to be at 20% capacity.

Fans have been barred from matches in Italy for the majority of the past year because of the coronavirus pandemic, apart from a brief period shortly after the start of the season when up to 1,000 spectators were allowed into stadiums.

“It was a final deserving of the name in front of fans. We are happy for that too,” said Juventus coach Andrea Pirlo, who celebrated his 42nd birthday on Wednesday.

Dejan Kulusevski and Federico Chiesa scored for Juventus, either side of Ruslan Malinovskyi’s equalizer for Atalanta shortly before halftime.

It was Pirlo’s second trophy in his first season as a coach, having steered Juventus to the Italian Super Cup in January.

However, Juventus saw its nine-year reign as Serie A champion ended by Inter Milan and is in danger of finishing outside the top four and missing out on a Champions League place.

“We had so much desire to win, despite a season that wasn’t too positive, we regrouped and I think we deserved this trophy,” Pirlo said.

Atalanta was bidding for its first Italian Cup trophy since 1963. It had lost three previous finals, including in 2019 to Lazio.

“Winning the title in Italy is a great difficulty for teams outside the ‘big ones’ and that’s the same for the Italian Cup,” Atalanta coach Gian Piero Gasperini said. “We’re happy to have got to the final, playing it at level terms. Just as we are happy to have qualified for the Champions League for the third successive year.

“Achieving our goals are our wins. I’m disappointed for the guys, who played with a great desire to win, but that’s soccer. We certainly leave with our heads held high.”

Gasperini’s lineup almost got off to the perfect start as Duván Zapata forced his way into the left side of the area before pulling back for José Palomino but Buffon saved the shot with his legs.

The World Cup-winning goalkeeper is set to leave Juventus — for the second time — at the end of the season.

Juventus took the lead against the run of play in the 31st minute as Juan Cuadrado sparked a counterattack and Weston McKennie rolled across for Kulusevski to curl into the far corner.

Atalanta leveled 10 minutes later when Remo Freuler managed to win the ball in a duel with Juventus midfielder Adrien Rabiot and spread it to the right. It was then rolled across for Malinovskyi to smash it into the roof of the net.

Juventus almost restored its lead on the hour as Ronaldo’s backheeled flick released Chiesa, but his effort came off the right post, with Atalanta goalkeeper Pierluigi Gollini beaten.

The Bianconeri did score the winner 12 minutes later when Chiesa played a one-two with Kulusevski before drilling into the left side of the net from close range.