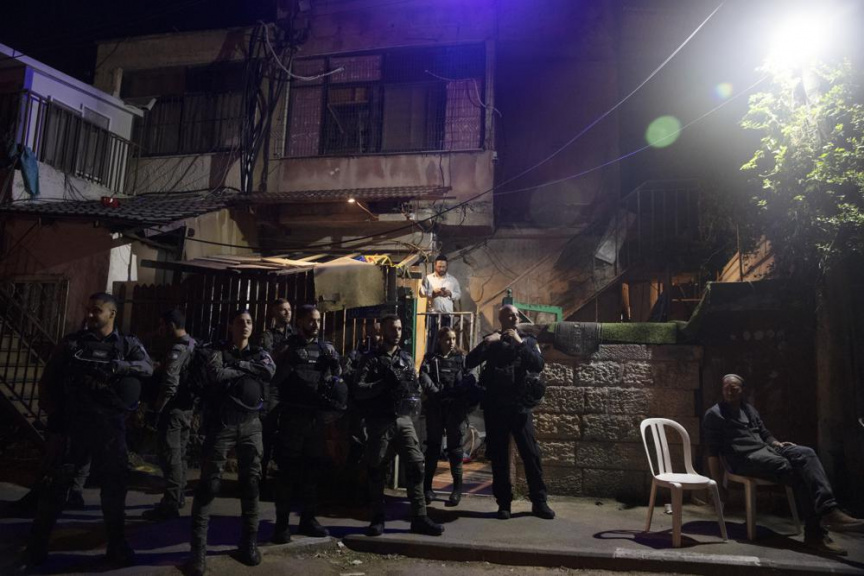 Israeli police stand guard in front of a Palestinian home occupied by settlers during a protest on the eve of a court verdict that may forcibly evict Palestinian families from their homes in the Sheikh Jarrah neighborhood of Jerusalem, Wednesday, May 5, 2021. (AP Photo/Maya Alleruzzo)

JERUSALEM (AP) — A 16-year-old Palestinian youth was killed Wednesday by Israeli gunfire in a clash in the northern West Bank, Palestinian health officials said, while Israel announced the death of a 19-year-old man who was wounded in a drive-by shooting earlier this week.

The Palestinian Health Ministry identified the teen as Saeed Yusuf Muhammad Oudeh and said he was killed in the village of Odla, near the city of Nablus.

The Israeli military said that a number of suspects hurled firebombs at troops conducting what it described as routine activity) in the area.

“The troops operated to stop the suspects by firing toward them,” it said, adding that the incident was under investigation. No soldiers were hurt.

Meanwhile, Israeli Defense Minister Benny Gantz announced the death of Yehuda Guetta, who was shot in the head on Sunday when a gunmen opened fire from a Palestinian vehicle at a busy intersection in the occupied West Bank. Two other Israelis were wounded.

Israeli forces this week have been conducting home raids and carrying out arrests in the search for the suspect.

“The army and all security forces will not rest until they catch the terrorist who murdered Yehuda,” Gantz said.

The deaths occurred during a recent uptick in violence coinciding with the Muslim holy month of Ramadan.

In recent days, Palestinians have scuffled with police during protests against the threatened eviction of dozens of Palestinians in the Sheikh Jarrah neighborhood in east Jerusalem. Several Palestinian families in Sheikh Jarrah have been embroiled in a long-running legal battle with Israeli settler groups trying to acquire property in the neighborhood.

Israel captured east Jerusalem, along with the West Bank and Gaza, territories the Palestinians want for their future state, in the 1967 Mideast war. Israel annexed east Jerusalem in a move not recognized internationally and views the entire city as its capital.

The Palestinians view east Jerusalem — which includes holy sites for Jews, Christians and Muslims — as their capital, and its fate is one of the most sensitive issues in the Mideast conflict.

In the Gaza Strip, the shadowy leader of the armed wing of the Islamic militant group Hamas this week issued his first public statement in nearly seven years, warning Israel it will pay a “heavy price” if it evicts Palestinians from their homes in east Jerusalem.

US gives $15 million to Palestinians to deal with virus