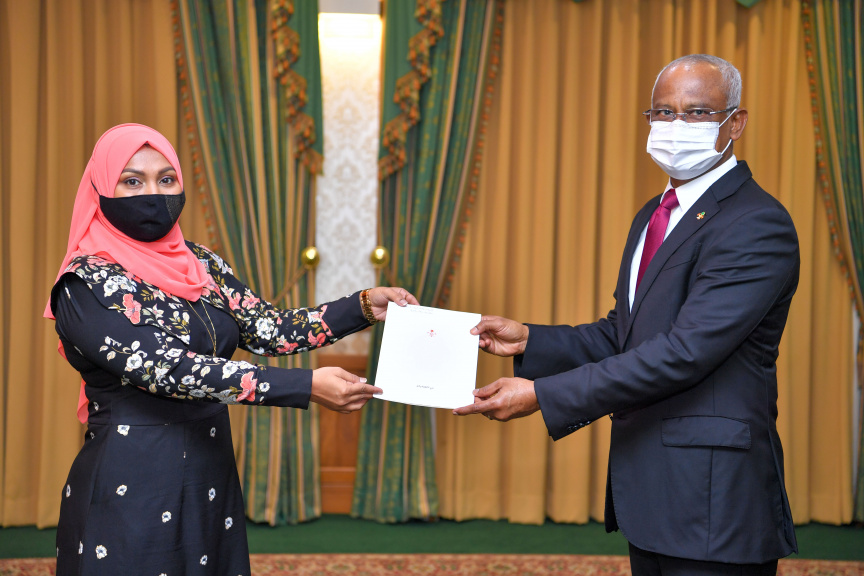 Shifla Ibrahim (L) is presented with her letter of appointment as a member of Maldives Broadcasting Commission by President Ibrahim Mohamed Solih (R) on May 5, 2021. (Photo/President's Office)

Shifla was presented with her letter of appointment as a member of BroadCom by President Ibrahim Mohamed Solih in a function at the President’s Office this Wednesday.

Following the presentation of the letter of appointment, President Solih and Shifla discussed pertinent issues related to the broadcasting sector.

Shifla, who has a Master of Arts in Journalism and Media Communications from the Islamic University of Maldives, began her journalism career in Television Maldives as an announcer trainee back in 1999.

She most recently worked at SanguTV as a news anchor.

Shifla received the backing of the Parliament for her appointment to BroadCom with a majority vote of 71 parliamentarians on Thursday, April 29.

The candidates were vetted by the Independent Institutions Committee, which voted in favor of Shifa with the unanimous consensus of all 11 members.

It marked the third time for Shifla to be nominated and secure approval from the Independent Institutions Committee for appointment to BroadCom. She failed to gain necessary approval from the parliament floor on the previous two occasions.

Reliance on trusted sources urged for reporting on fire