Oblak secures Atlético win; Dest, Messi get 2 each for Barça 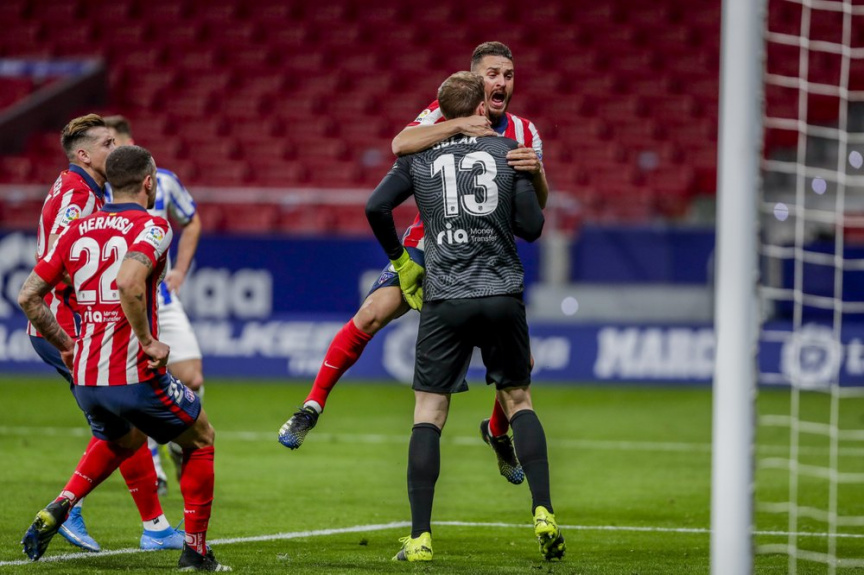 MADRID (AP) — After Jan Oblak swatted the ball away with a superb penalty save in the 86th minute, Atlético Madrid coach Diego Simeone celebrated on the sideline as if his team had just scored a goal.

His players did, too, rushing to embrace the man who secured Atlético a win that could be decisive in the fight for the Spanish league title.

Luis Suárez had earlier scored his 500th career goal with club and country to help give Atlético a hard-fought 1-0 home win against relegation-threatened Alavés on Sunday.

Messi played his 768th match for Barcelona to surpass Xavi Hernández for the record number of club appearances.

“Luckily I made the stop near the end of the match and we could add the three points,” Oblak said. “These points are crucial for us as Real Madrid and Barcelona are coming after us.”

Seeking its first league title since 2014, Atlético will enter the international break six points in front of third-place Real Madrid, which won 3-1 at Celta Vigo on Saturday.

“We’ll keep trying to win our matches and then we’ll see what happens in the end,” Antoine Griezmann said. “If we keep playing like we’ve been playing recently, we can do it.”

Suárez, who had scored only twice in the last nine matches in all competitions, put Atlético ahead with a diving header in the 54th minute after a cross by Kieran Trippier.

Oblak, who hadn’t been successful on penalty kicks recently, preserved the victory by diving to his right to make a one-hand save against the late shot from the spot taken by Joselu.

“All great teams have these players who can be decisive by scoring goals and making saves,” Simeone said.

The penalty came after defender Stefan Savic elbowed an opponent while trying to protect the ball at the edge of the area.

Atlético was coming off elimination against Chelsea in the round of 16 of the Champions League and had been held 0-0 at Getafe in its previous Spanish league match.

Aláves has lost five of its last six league games. It sits second-to-last in the 20-team standings with 23 points, two from safety.

Simeone’s team held a comfortable league lead until recently but had been gradually losing ground as Barcelona and Madrid charged to the top.

Griezmann opened the scoring in the 37th before Dest netted in the 43rd and 53rd minutes for his first league goals with the Catalan club. The American right back had already scored in a Champions League game in his first season with the Spanish powerhouse.

Messi netted his league-leading 22nd and 23rd goals from inside the area in the 56th and 89th.

Ousmane Demebélé scored in the 71st shortly after having a goal disallowed for offside.

Sociedad’s lone goal was scored by Ander Barrenetxea in the 77th.

Valencia beat Granada 2-1 thanks to goals from Daniel Wass and Álex Blanco.