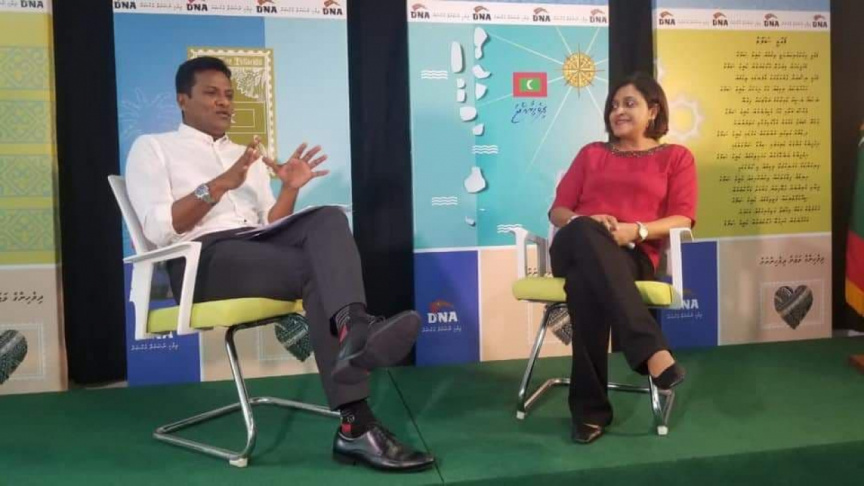 The Dhivehi National Action (DNA) has called to disclose the agreement signed by the government with India for the development of the Uthuru Thila Falhu (UTF) dockyard.

The agreement has caused controversy with many critical of the government and expressing mistrust that the agreement favors and grants India too much power. However, this has been refuted by the Maldives National Defense Force (MNDF) and the Defense Ministry.

Former Home Minister Umar Naseer and former Foreign Minister Dunya Maumoon, who lead the DNA movement, spoke on the matter last night expressing the concern of the movement over the matter. Umar has also been accused of causing alarm and unrest, by leaking a draft of the agreement for UTF. MNDF has since stated that the draft of the agreement contained untrue clauses.

Umar, speaking on the leaked draft of the agreement, said that it was something sent by India around June 22, 2020. He said that in 2019, after the second defense dialogue held between the two nations, Maldives had sent the terms of references to India in September of that year.

“The agreement floating currently is the one sent by India based on those terms of references in June 22, 2020. It is exactly as how the Indian government sent it to the Maldivian government,” said Umar. He added that only government officials would know the changes brought about to it.

“I am calling to disclose the current agreement to us. What is on the internet, is exactly what the Indian government sent on June 22,” said Umar. He noted that the agreement was sent during a time when the Maldives was in a dire situation economically due to COVID-19.

“They (India) hoped that by sending this at such a difficult time, that the Maldivian government would accept and sign it. That’s what they wanted. That is why they sent it at such a dire time for us,” said Umar.  He admitted that the dockyard being developed in UTF would be very useful to the Maldives but that the MNDF needed to be a self-empowered military.

He repeatedly called on the government to disclose the agreement if any changes were brought to the agreement.

MNDF, in a press conference earlier yesterday, denied that India had exclusivity to the dockyard and that no armed military personnel would be based at the location.

Chief of Defense Force General Shamaal said that the document circulated on social media was a baseless one to which a lot of changes had been made. He repeatedly called to stop the spread of misinformation regarding the army. Chief Shamaal also warned that all options would be explored to stop the spread of such rhetoric. Other senior army officials in the presser also called to stop using the MNDF for political purposes.