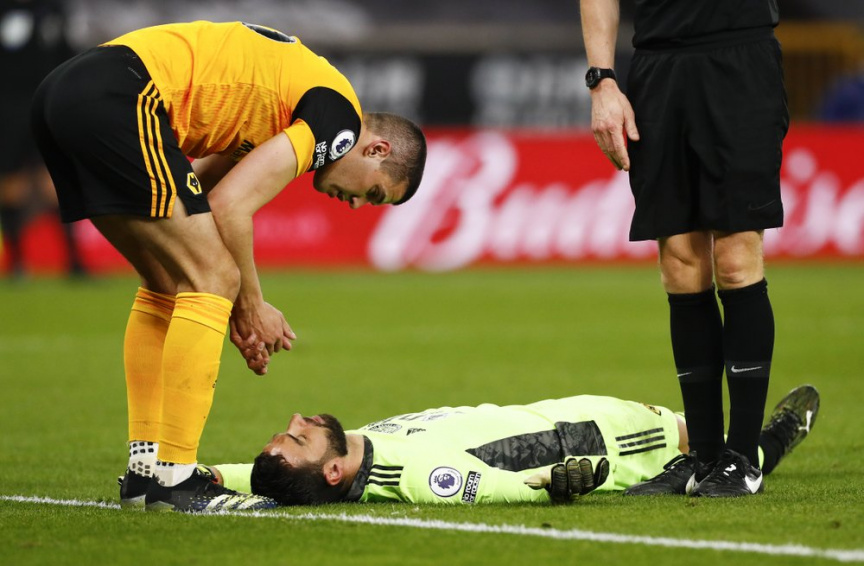 WOLVERHAMPTON, England (AP) — Diogo Jota scored the winner against his former club as Liverpool beat Wolverhampton 1-0 in an English Premier League match that ended with Wolves goalkeeper Rui Patricio being carried off with a head injury on Monday.

Jota, who spent three years at Wolves before joining Liverpool in September, drove in a low, first-time shot that squirmed into the corner in the second minute of first-half stoppage time. Patricio got a hand to the ball but failed to keep it out at his near post.

The goalkeeper didn’t finish the game after being struck on the head in the 87th minute by the knee of teammate Conor Coady, who was running back into his area.

Coady looked particularly concerned as medical staff attended to Patricio with caution for 10 minutes before he was taken off on a stretcher.

Wolves manager Nuno Espirito Santo gave a positive update on Patricio’s condition after the game, saying: “He’s OK. He is conscious, he remembers what happened, he is aware. He is OK.”

In November, Wolves striker Raul Jimenez fractured his skull in a clash of heads during a league match at Arsenal. Jimenez was in the empty stands at Molineux on Monday.

“Football becomes irrelevant when someone is down that long and the doctors have to come on,” Liverpool defender Andrew Robertson said of Patricio.

“I know how it can affect the lads and that’s two (incidents) they’ve had this season. I hope to see him in front of the goals again soon because he’s a fantastic goalkeeper.”

It was only Liverpool’s second win in its last eight league games of a title defense that has imploded in the second half of the season.

The Reds climbed two places to sixth, but was still five points behind fourth-placed Chelsea with nine games remaining in the race for Champions League qualification. Chelsea along with three other teams in the race for the top four — Everton, West Ham and Tottenham — all failed to win over the weekend.

Aided by the return of Jota to spark the attack and Fabinho in the holding midfield role, there are small signs of a revival for the Reds, who also beat Leipzig last midweek to reach the Champions League quarterfinals and have kept two straight clean sheets.

But there was little between Liverpool and Wolves in a low-quality match.

Jota, who cost Liverpool about $52 million, was playing his fourth straight game since returning from three months out with a knee injury. He again started in place of Roberto Firmino, who is still out injured.

“It’s a special game, I worked here for over three years,” Jota said. “I know almost everyone in that dressing room. I just wish the fans could be here to make it even more special.”