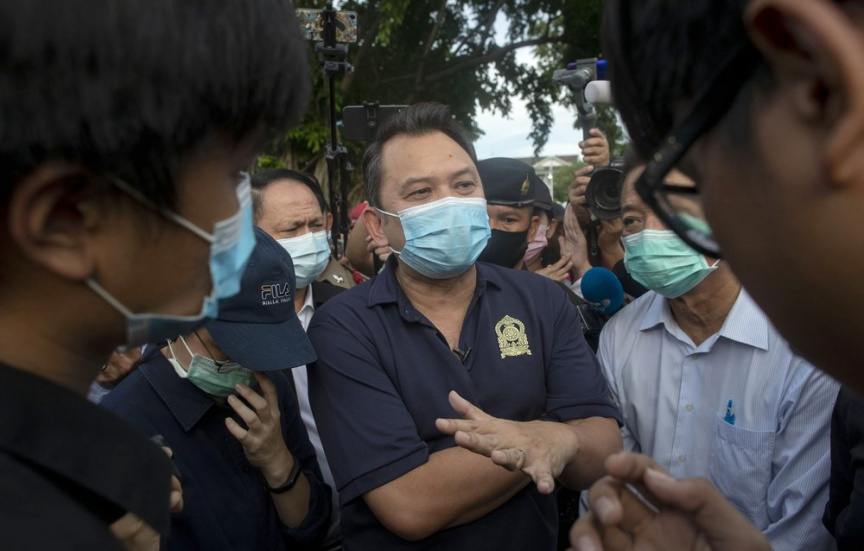 BANGKOK (AP) — Three Cabinet ministers in Thailand were forced to leave their posts Wednesday after a court found them guilty of sedition for taking part in sometimes-violent protests in 2013-2014 against the government then in power.

The Criminal Court in Bangkok found Digital Economy Minister Buddhipongse Punnakanta, Education Minister Nataphol Teepsuwan and Deputy Transport Minister Thaworn Senneam guilty along with about two dozen other defendants in a case that was launched in 2018.

Nataphol was among 10 Cabinet member who survived a no-confidence vote on Saturday over their performance in the current government.

The verdicts can be appealed to a higher court but under the law the Cabinet ministers must relinquish their jobs immediately.

Another prominent person convicted Wednesday was Suthep Thaugsuban, a former deputy prime minister who helped found the People’s Democratic Reform Committee, which led the demonstrations against the elected government of then-Prime Minister Yingluck Shinawatra. Instability caused by the street protests led to the Thai army staging a coup in 2014 and keeping power until 2019.

Suthep and the Cabinet ministers each received prison sentences ranging from five to about seven years. Another prominent defendant, Suwit Thongprasert, who was a Buddhist monk known as Buddha Issara during the protests, was sentenced to 4 years and 8 months in prison. All were remanded into custody pending appeals procedures.

“We are prepared. Whatever happens, will happen,” Suthep said outside the court. “But I have to assure you that the protest leaders and those who share our same belief, that we are fighting for our country and our land. We firmly believe in responsibility in our actions and not violating the law.”

The protests marked the tail end of almost a decade of intense political contention in Thailand that began in 2006 after then-Prime Minister Thaksin Shinawatra was ousted by a coup after being accused of corruption and abuse of power. Thaksin is Yingluck’s brother, and they are both currently in exile.

Thaksin’s ouster set off years of sometimes violent conflict between his supporters and opponents, both of which engaged in aggressive street protests against governments led by the other’s faction. The People’s Democratic Reform Committee was in the anti-Thaksin camp, which in an earlier incarnation as the People’s Alliance for Democracy occupied the prime minister’s offices and Bangkok’s international airport for about a week in 2008.

Thaksin’s supporters were known as the Red Shirts, and in 2010 wreaked havoc by occupying part of central Bangkok. Their protest was suppressed by the army in several weeks of violence that took almost 100 lives.

The court in Bangkok on Wednesday dismissed charges of insurrection and terrorism against the defendants, on the ground that they had not used force to hurt anyone.

However, Suthep and 26 other defendants were found guilty on several other lesser charges carrying prison terms as short as four months. The court suspended for two years the sentences of 12 people because they considered them participants rather than leaders of the protests.