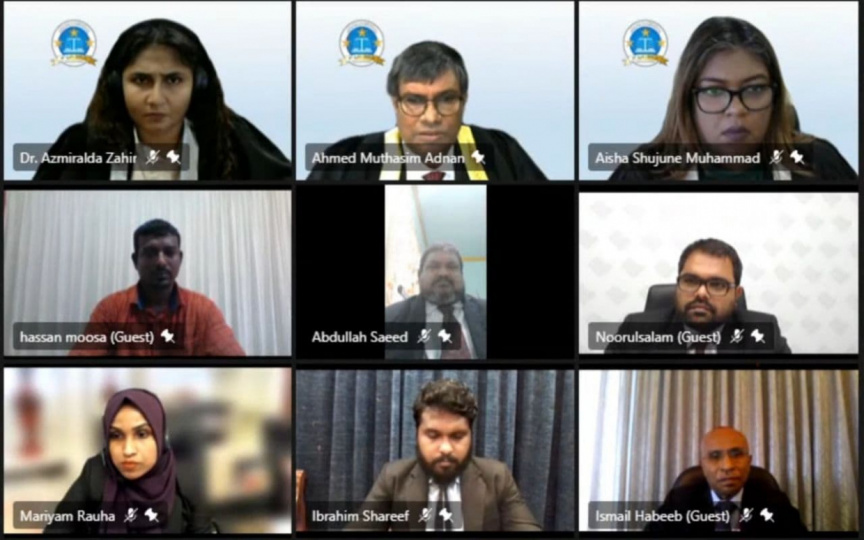 Virtual hearing of the Supreme Court case in the case of Hassan Moosa v Elections Commission.

The Supreme Court of the Maldives has ruled that the termination of the candidacy in a particular case of a candidate in the upcoming Local Council Elections was decided incorrectly.

The Supreme Court ruled that the candidacy of Hassan Moosa who was competing for the Kandoodhoo Council presidency was terminated incorrectly by the Elections Commission (EC).

The termination was on the grounds that Moosa had a court-mandated debt which he was not repaying accordingly. The EC had announced that due to the termination of Moosa’s candidacy, the remaining candidate for the post who is from the governing MDP had been automatically elected.

Moosa, advocating for his case, stated that the EC had to make a decision on the candidacy of candidates in the election within 48 hours of accepting the application of the candidate, under electoral laws.

Moosa noted that the EC had accepted his candidacy within the specified timeframe and argued that the EC cannot go back on this if they had not rejected the application within 48 hours, as per a prior ruling of the Supreme Court.

The decision of the top court, in that case, stated that EC reverting its decision was to prevent any corruption., protect the electoral rights of candidates, and prevent misuse of the unlimited powers granted to the EC to terminate candidacy.

The decision in today’s ruling read that the court was granted the power to terminate the candidacy of a candidate in situations where the EC wishes to revert the decision after accepting the candidacy.

In Hassan Moosa’s case, the EC submitted such a case to the top court, which was rejected by the court’s registrar. The Justices today noted that the EC had not appealed in the case.

The court struck down the decision by the EC to terminate the candidacy of Hassan Moosa. Until and when the top court makes a decision whether Hassan Moosa meets the requirements for the candidacy, his name is to remain as a candidate in the election.