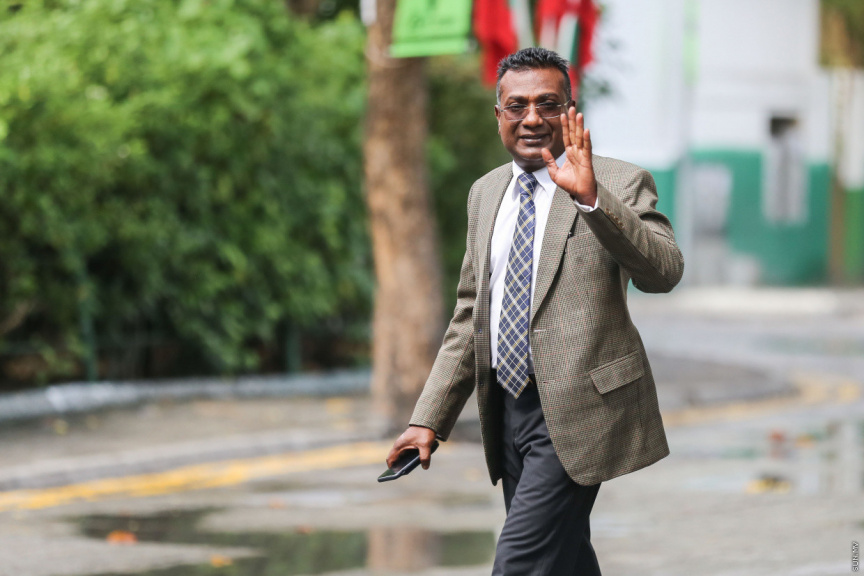 Kaashidhoo MP Abdulla Jabir is seen in this photo as he waves to reporters.

The COVID-19 task force of A. A. Mathiveri has fined Kaashidhoo parliamentarian Abdulla Jabir after the MP visited the island without obtaining prior permission from the Health Protection Agency (HPA).

The task force also instructed the parliamentarian to leave the island immediately. A task force official who wished to remain anonymous said that MP Jabir had been on the island for four days and had not presented a permit for his travel. It was also not known if the MP had applied for any permits.

"He had visited just like this on previous occasions without any permit. Due to a lot of complaints from the residents, the Council Police and the Health Center task force did this," said the official.

The official also added that the task force contacted the MP after complaints were received. The MP had said that he had applied for a permit which is to be received as of yet. The official further went on to state that the MP had attempted to cause unrest in a guesthouse on the island.

"The guesthouse did not lodge a complaint with police. Don't know why. A lot of such incidents have been observed from him previously. A lot of violations of the public health guidelines," said the official.

The task force had also instructed MP Jabir to leave the island since he did not have a permit.

"After he was instructed to do so, he replied that he would leave if he did not receive a permit by 18:00. It's past 18:00 now, we have not seen a speedboat come into the harbor yet." said the official.

The official even said that the parliamentarian did not have a test result negative for COVID-19 and had come into contact with a lot of islanders during the four days he had been on the island.

"This is a huge issue. Even last night, we heard that some children were taken for some work. Some high-risk women were also taken yesterday for more work. The island has previously seen a spread of the virus from the negligence of an individual in home-quarantine," said the official.

The official expressed concern that MP Jabir was not being reprimanded despite repeat violations.

Police have also said that 11 individuals were fined after traveling to Mathiveri without permits.

Today 11 people were fined for violating HPA guidelines and travelling to AA. Mathiveri without travelling permits from HEOC. We urge public to strictly follow all safety measures for your safety and that of others. 1/2

Due to the spread of COVID-19, travelers from Male' City to other islands in the Maldives are required to obtain permits and undergo quarantine.

'I am ready to join the opposition coalition'

'Protested as I was stopped from entering Majilis'

'Travel ban order against me has been lifted'