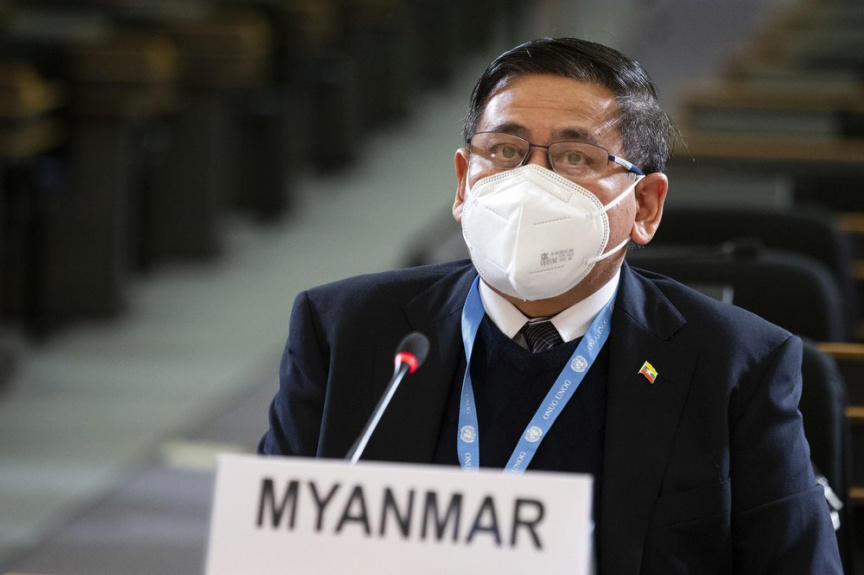 Myint Thu, ambassador of the Permanent Representative Mission of Myanmar to Geneva, addresses his statement during the Human Rights Council special session on "the human rights implications of the crisis in Myanmar" at the European headquarters of the United Nations in Geneva, Switzerland, Friday, Feb. 12, 2021. (Salvatore Di Nolfi/Keystone via AP)

In a special session at the Human Rights Council, the original resolution presented by Britain and the European Union was revised to remove calls to bolster the ability of a U.N. rights expert to scrutinize Myanmar and for restraint from the country’s military.

After the updated resolution passed with no opposition, Chinese Ambassador Chen Xu thanked the sponsors for “adopting our recommendations” but said China still was distancing itself from the measure.

The sponsors of council resolutions often agree to soften the language of their texts in order to win consensus and to show that the 47-member body is united on thorny human rights issues.

The council has no power to impose sanctions but can train a political spotlight on rights abuses and violations. The session came shortly after the Biden administration, which has already imposed sanctions on top leaders of the Myanmar coup, revived U.S. participation in the Human Rights Council, which the Trump administration pulled the country out of in 2018.

U.N. spokesman Stephane Dujarric called the resolution’s adoption “a very important step” that shows “the international community will speak strongly ... in calling for a reversal of the events we’ve seen in Myanmar, and for the full respect of the democratic will of the people of Myanmar as well as full respect of their human rights.”

“The disproportionate use of force, the use of live ammunition -- those are all unacceptable,” Dujarric stressed.

China and Russia faulted attempts to politicize the situation in Myanmar and called it a domestic matter. Many Western countries, the U.N. rights office and others decried the coup and state of emergency.

“The seizure of power by the Myanmar military earlier this month constitutes a profound setback for the country after a decade of hard-won gains in its democratic transition,” Deputy High Commissioner for Human Rights Nada al-Nashif said. “The world is watching.”

The resolution called for the “immediate and unconditional release” of Suu Kyi, President Win Myint and other top government officials, for the lifting of internet restrictions, and for the military to respect peaceful assembly and refrain from “excessive force against the public.”

But the revised text excised a call on U.N. Secretary-General Antonio Guterres and the U.N. human rights chief, Michelle Bachelet, to give the independent U.N. special rapporteur on Myanmar, Tom Andrews, “increased assistance, resources and expertise” to carry out his job.

“We need real action from the United Nations,” said Andrews, a former member of the U.S. House of Representatives, citing information that the junta had detained 220 government officials and civil society members.

“The message from the people of Myanmar to all of you and to the people of the world is clear: This cannot stand,” he said. Andrews has been seeking the right to visit Myanmar, which its government has denied.

Danish Foreign Minister Jeppe Kofod said in a video message his country would suspend “all direct development cooperation with the now illegitimate government” but “continue to support the civil society of Myanmar.”

The U.S. charge d’affaires in Geneva, Mark Cassayre, urged Myanmar’s military to return power to the democratically elected government, and invited other countries to “join us in promoting accountability for those responsible for the coup, including through targeted sanctions.”

The Feb. 1 coup led by Min Aung Hlaing ousted Nobel laureate Suu Kyi from power and prevented recently elected lawmakers from opening a new session of Parliament. It reversed nearly a decade of progress toward democracy following 50 years of military rule and has led to widespread protests.

The military says it was forced to step in because Suu Kyi’s government failed to properly investigate allegations of fraud in November elections. The election commission has said there is no evidence to support those claims.

Wearing a mask in a nearly empty hall at the U.N. Geneva amid the coronavirus pandemic, Myanmar’s ambassador, Myint Thu, largely gave general commitments from his country, such as helping internally displaced people or fighting COVID-19. He took office in October under Suu Kyi’s government, but justified the military’s actions.

“In light of the post-election irregularities and following complex situation, Tatmadaw was compelled to take the state responsibility in accordance with the state constitution,” the ambassador said, using the term for Myanmar’s military.

“Myanmar is undergoing the complex — extremely complex — challenges and delicate transition,” he said. “We do not want to stall our nascent democratic transition in the country.”

Russia and China, among a few others including Belarus, said they opposed attempts to make a human rights case of the situation in Myanmar, calling it a domestic matter.

“Attempts to whip hype around the situation in Myanmar need to cease,” said Gennadiy Gatilov, the Russian ambassador in Geneva.

Sudan’s ambassador, Ali Ibn Abi Talib Abdelrahman Mahmoud, reminded the council of other concerns about rights in Myanmar — namely abuses against Rohingya Muslims, who fled a violent military crackdown by the hundreds of thousands into neighboring Bangladesh.