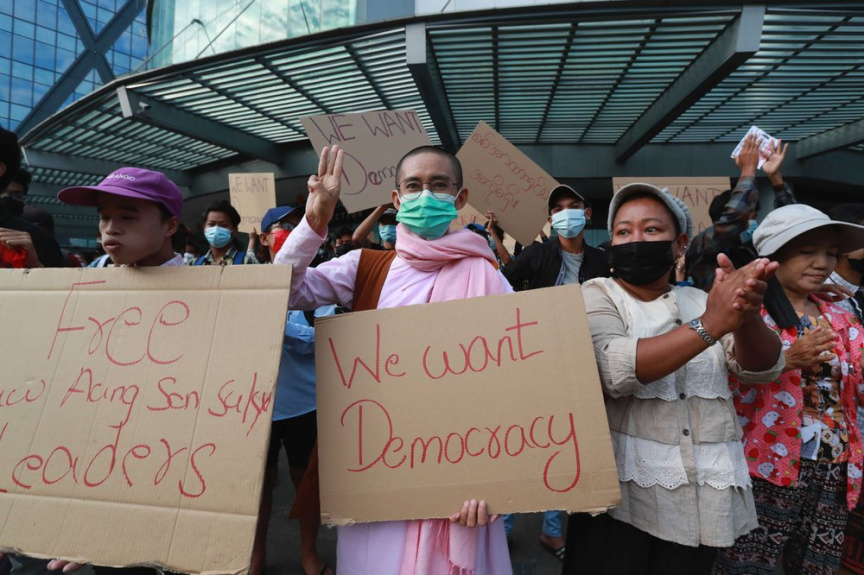 The protesters at a major downtown Yangon intersection chanted slogans, raised a three-finger salute and carried placards saying “Reject the military coup” and “Justice for Myanmar.” Starting with a few hundred people, the crowd exceeded a thousand by midmorning and cars passing by honked their horns in solidarity.

Some smaller groups broke off from the main protest and headed to the Sule Pagoda, a past rallying point for major protests against previous ruling juntas. Monday’s action followed a protest Sunday involving tens of thousands of people demonstrating to demand the release of deposed leader Aung San Suu Kyi and other top figures from her National League for Democracy party.

The growing protests are a sharp reminder of the long and bloody struggle for democracy in a country that the military ruled directly for more than five decades before loosening its grip in 2012. Suu Kyi’s government, which won a landslide election in 2015, was the first led by civilians in decades, though its power was limited by a military-drafted constitution.

During Myanmar’s years of isolation under military rule, the golden-domed Sule Pagoda served as a rallying point for political protests calling for democracy, most notably in during a massive 1988 uprising and again during a 2007 revolt led by Buddhist monks.

The military used deadly force to end both of those uprisings, with estimates of hundreds if not thousands killed in 1988. While riot police have watched the protests this past week, soldiers have been absent and there have been no reports of clashes.

Several videos posted online Sunday that were said to be from the town of Myawaddy, on Myanmar’s eastern border with Thailand, showed police shooting into the air in an evident effort to disperse a crowd. There were no signs of panic and no reports of injuries.

Showing little fear, protest crowds have grown bigger and bolder in recent days, while remaining nonviolent in support of a call by Suu Kyi’s party and its allies for civil disobedience.

An intermittent communication blockade in recent days was a stark reminder of the progress Myanmar is in danger of losing. During Myanmar’s decades of military rule, the country was internationally isolated and communication with the outside world strictly controlled.

The elected lawmakers of Suu Kyi’s party met in an online meeting Friday to declare themselves as the sole legitimate representatives of the people and asked for international recognition as the country’s government.

The military has accused Suu Kyi’s government of failing to act on its complaints that last November’s election was marred by fraud, though the election commission said it had found no evidence to support the claims.