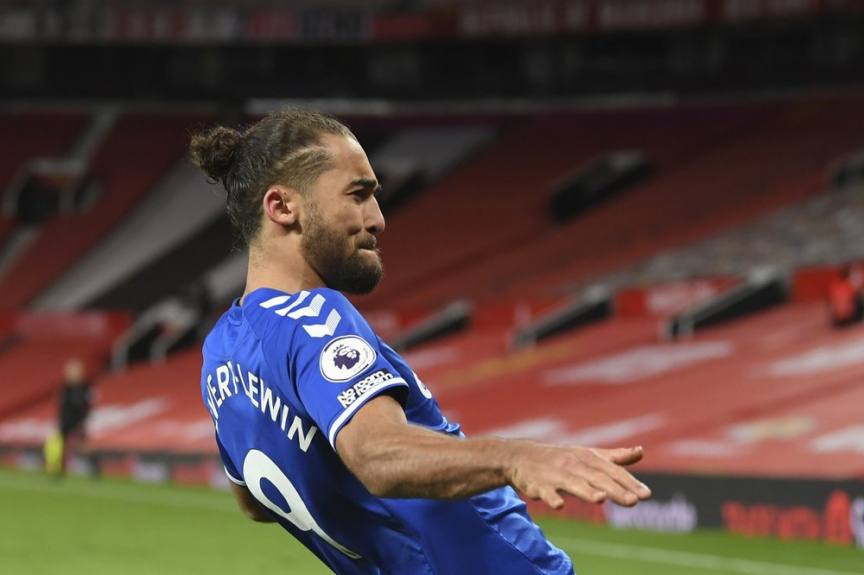 By scoring 12 goals in two matches over four days, Manchester United’s players are showing they have the firepower to challenge Manchester City for the English Premier League title.

The problem is, they don’t have the defense to go with it.

United conceded a goal in the fifth minute of stoppage time to draw Everton 3-3 at home on Saturday for a result that highlighted the vibrancy of Ole Gunnar Solskjaer’s team going forward but the vulnerability of it at the back.

Helped by the record-tying 9-0 win over Southampton on Tuesday, United has the most goals in the league with 49 — six more than the next best, Liverpool.

But with 30 goals conceded, United has the worst defense in the top 10. City, on the other hand, has conceded only 13 and goes into Sunday’s showdown with Liverpool with a two-point lead over United and two games in hand.

“The last kick of the ball makes us go home really disappointed,” Solskjaer said. “We have lost two points on a long thump upfield, which we should have defended.

The results of United’s last three games at Old Trafford underline the team’s inconsistency that is likely to undermine a title challenge: Before the 9-0 win over Southampton came a 2-1 loss to last-placed Sheffield United.

United led Everton 2-0 at halftime thanks to Edinson Cavani’s header and a nonchalant strike by Bruno Fernandes, who floated a long-range shot over goalkeeper Robin Olsen and into the corner after producing a dummy to create some space outside the area.

Everton responded with two goals in a four-minute span early in the second half, through Abdoulaye Doucoure and James Rodriguez.

United regained the lead in the 70th when Olsen allowed a header from Scott McTominay to squirm past him.

With a second defeat in four days, Arsenal slipped further away from the European qualification places.

Mikel Arteta’s team lost at Aston Villa 1-0 after conceding a deflected goal after 74 seconds to Ollie Watkins. On Tuesday, Arsenal lost at Wolverhampton 2-1 after having two players sent off.

After a recent resurgence, Arsenal has dropped back to 10th place, nine points behind Liverpool in fourth.

Arteta had no qualms about the performance of his players, though, saying: “Really strong performance. We completely dominated the game, we dominated every department, and we should have won.”

Referee Mike Dean was adjudged to have got a red-card decision incorrect when his sending-off of Southampton defender Jan Bednarek in a 9-0 loss to Man United on Tuesday was rescinded by the Football Association later.

Another contentious call by the eccentric official in West Ham’s match at Fulham on Saturday could be scrutinized in the coming days, too.

At a free kick in second-half stoppage time, Tomas Soucek appeared to be attempting to get his hands free when he lifted his left arm and brushed his elbow against the face of the Fulham player marking him, Aleksandar Mitrović.

Mitrović fell to the ground theatrically and Dean was advised by VAR to look at the incident on the pitchside monitor. After an extensive review, he showed Soucek a red card, much to the disbelief of the Czech Republic midfielder.

“I’m a bit embarrassed for Mike Dean — the level of referee he is -- to make that decision,” West Ham manager David Moyes said. “It was obvious to everyone it was accidental.”

“The game is becoming very sterile,” Parker said, referring to the use of technology.

Fulham remained without a win since Nov. 30 and the draw didn’t help the third-from-last team move closer to leaving the relegation zone.

That’s because Burnley, the team above Fulham, drew with Brighton 1-1 to maintain the eight-point gap.

Southampton made it 12 goals conceded in two games by producing another woeful defensive display in a 3-2 loss at Newcastle, which ended the game with nine men.

After his reprieve from the FA, Bednarek started at St. James’ Park but deflected the ball into his own net for one of the goals -- like he did against United on Tuesday.

Goalkeeper Alex McCarthy was at fault for the third Newcastle goal -- scored by Miguel Almiron for his second of the game -- because of a sloppy pass out from the back.

Newcastle’s Jeff Hendrick was sent off in the 50th and Fabian Schar was carried off in the 78th without being replaced as the team had already made three substitutions.