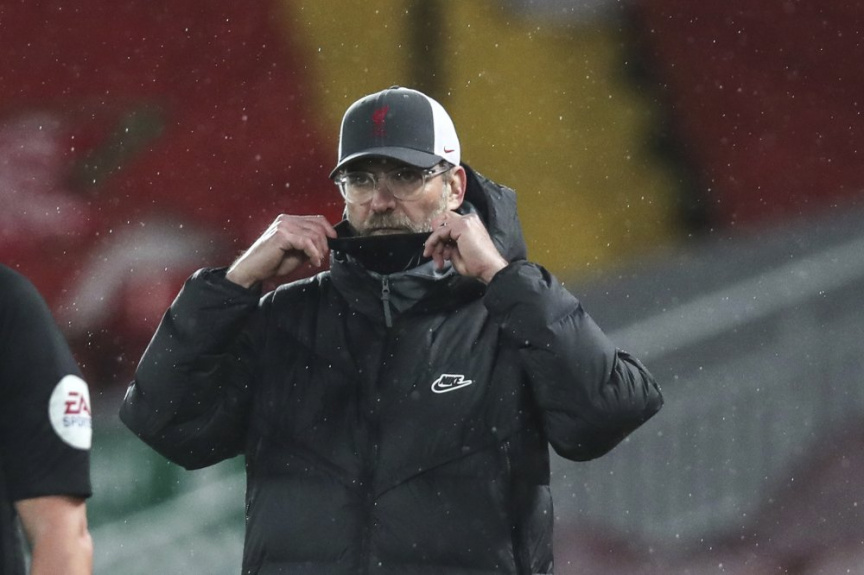 After going 68 Premier League games unbeaten at Anfield, Liverpool has slumped to back-to-back losses at the stadium that was its impenetrable stronghold for nearly four years.

The latest defeat — to lowly Brighton — left the champions’ title defense on the brink of collapse.

Just like against Burnley two weeks ago, Liverpool was beaten 1-0 by a team battling to avoid relegation. Jurgen Klopp’s team dropped seven points behind leader Manchester City, which has a game in hand and is on a nine-match winning streak.

City is the next visitor to Anfield, on Sunday. A win for Pep Guardiola’s team may effectively knock Liverpool out of the title race — with more than three months of the season remaining.

“The only explanation now is that we are a fatigued team,” said Klopp, whose squad has been badly hit by injuries this season, especially in defense. “City are flying and we have to find solutions.”

Seeking to regain the title it relinquished to Liverpool last season, City produced another dominant display in overwhelming Burnley in a 2-0 victory at Turf Moor.

That restored City’s three-point advantage over second-place Manchester United, which won 9-0 over Southampton on Tuesday. City has played a game less than United, too.

Gabriel Jesus and Raheem Sterling scored first-half goals as City won a 13th straight game in all competitions — a run of victories stretching back to Dec. 15.

While City has conceded just two goals in 13 league games, Liverpool’s issues in defense continue as it struggles to overcome the likely season-long absence of Virgil van Dijk. They weren’t helped by goalkeeper Alisson Becker missing out against Brighton because of an illness and a muscle problem keeping Sadio Mane out for a second straight game.

The title might soon be gone for Liverpool, and a place in the top four is hardly guaranteed.

The Reds are in fourth place but only two points ahead of fifth-place West Ham, which won 3-1 at Aston Villa. Everton is two points further back in sixth after beating Leeds 2-1.

Leicester moved above Liverpool into third place with a 2-0 win at Fulham thanks to goal by Kelechi Iheanacho and James Justin.

From seemingly nowhere, Brighton has turned into one of the form teams of the league, with the win at Anfield coming three days after a victory over Tottenham by the same score.

Steven Alzate scored the winner in the 56th minute for his first Premier League goal, and Brighton held on relatively comfortably to make it four league matches without conceding since running Man City close in a 1-0 loss at Etihad Stadium on Jan. 13.

By taking 10 points from a possible 12, Brighton climbed two places to 15th and is 10 points clear of the relegation zone.

“Brighton deserved to win, they played well,” Klopp said. “They are a good football side.”

Jesse Lingard is looking to resurrect his Premier League career at West Ham. After scoring two goals in West Ham’s win at Villa, the on-loan Manchester United midfielder might not be too far from a return to the England squad, either.

Lingard made a stunning debut for the Hammers on his first league game since July, scoring their second and third goals to build on the opener by Tomas Soucek. Ollie Watkins replied for Villa.

England manager Gareth Southgate attended the match at Villa Park and West Ham manager David Moyes was delighted with his new signing who was a regular for England at the 2018 World Cup.

“If he keeps up the form he showed tonight — and he is not completely match fit — and is scoring the goals, he will not be far away from Gareth Southgate’s England squad (for the European Championship) in the summer,” Moyes said. “And he will help us no end before the summer. All round, a really great performance.”

Everton has won four straight away games in the league for the first time since the club’s glory years in the mid-1980s.

And it’s Dominic Calvert-Lewin’s goals which are leading Carlo Ancelotti’s team toward a finish in the European places.

Calvert-Lewin struck his first goal in eight league games and is now on 12 for the campaign, making him the second highest-scoring striker after Harry Kane.

Gylfi Sigurdsson opened the scoring for Everton before Calvert-Lewin’s ninth headed goal of the season made it 2-0 before the break. Raphinha reduced the deficit soon after halftime.

“This is a result of this season,” Ancelotti said, explaining why his team has won seven times on the road. “All the teams have more possibility to win away because there is no crowd there in the stand.”

Chelsea being sold to Dodgers owners for record $3BN

Tuchel says ‘zero problem’ between him and Pulisic