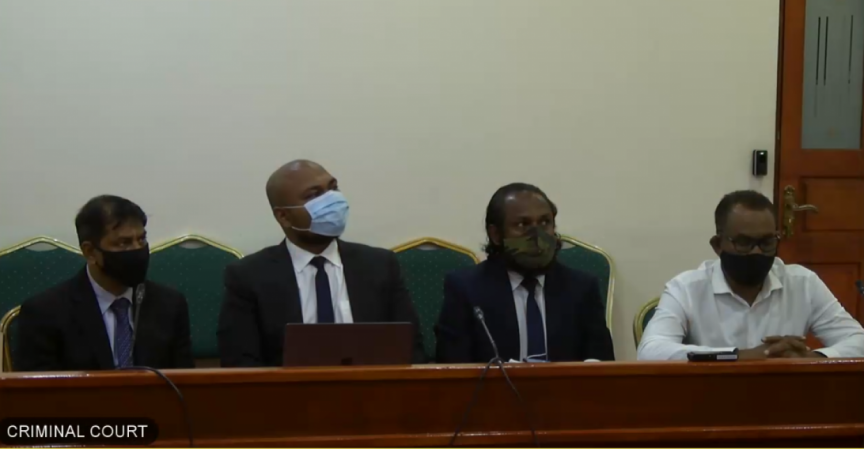 People’s National Congress (PNC) leader Abdul Raheem Abdulla (Adhurey) (R) sits with his lawyers during a hearing at the Criminal Court on January 31, 2021.

People’s National Congress (PNC) leader and former Fonadhoo MP Abdul Raheem Abdulla (Adhurey) asked for more time to respond to the charge against him on Sunday, as Criminal Court began preliminary hearings in the case against the opposition politician for using profane language in public.

Abdul Raheem is being prosecuted for using an obscene word as he expressed his displeasure at Criminal Court judges using a loudspeaker during a demonstration outside the court on November 28, 2019, the day former Maldivian President Abdulla Yameen Abdul Gayoom was convicted for money laundering.

Abdul Raheem was charged with using abusive or obscene language under Section 615 (Disorderly Conduct) (b) and (c) with reference to Section 615 (a) (3) over the incident nearly a year later on October 26, 2020.

The State prosecution announced the charge against Abdul Raheem during the preliminary hearing on Sunday morning. However, Abdul Raheem’s lawyer, his son-in-law Ahmed Hisham Wajeeh said that the defense received the court papers on Sunday itself, and asked for more time to prepare the defense.

Judge Hassan Saeed decided to allow Abdul Raheem the opportunity to respond to the charge during the hearing scheduled for next week.

Use of abusive or obscene language is a Class 3 misdemeanor. The minimum sentencing requirement for the offense is a one month and six days in prison. The defendant will be served a 27-day sentence if he/she confesses.

COVID-19 vaccination to begin in 3 regions on Feb. 1