Navalny’s team calls new protests in Russia for his release 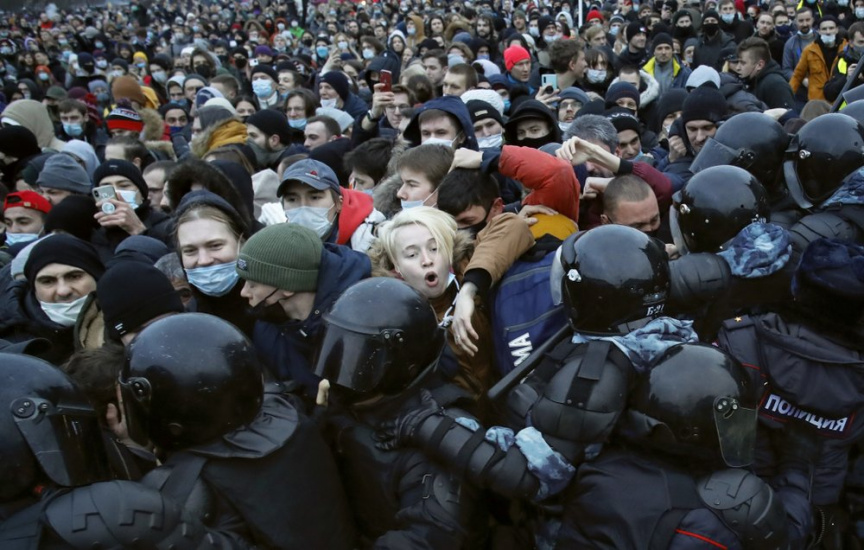 FILE - In this Jan. 23, 2021, file photo, people clash with police during a protest against the jailing of opposition leader Alexei Navalny in St. Petersburg, Russia. Allies of Navalny are calling for new protests next weekend to demand his release, following a wave of demonstrations across the country that brought out tens of thousands in a defiant challenge to President Vladimir Putin. (AP Photo/Dmitri Lovetsky, File)

MOSCOW (AP) — Allies of jailed Russian opposition leader Alexei Navalny, who faces years in prison, called for new protests next weekend to demand his release, following a wave of demonstrations that turned out tens of thousands across the country in a defiant challenge to President Vladimir Putin.

Mass rallies took place Saturday in over 100 cities in what observers said was the largest outpouring of anger in years, and Navalny’s supporters urged protesters to keep up the pressure.

Navalny strategist Leonid Volkov tweeted Monday for more demonstrations on Jan. 31 in “all Russian cities. ... For Navalny’s freedom. For our freedom. For justice.”

During Saturday’s protests, over 3,700 people were detained, according to OVD-Info, a human rights group that monitors political arrests. The group said the number was a record in its nine years of work. More than 1,400 detentions occurred in Moscow alone — also a record, according to Russian media.

Some of those detained were released without charges, but many others faced court hearings. In Moscow, courts have handed jail terms ranging from seven to 15 days to at least 30 detainees and fined 64 others.

Dozens of Navalny associates in various cities were detained in the days before the protests. Alexander Peredruk, senior partner of the Apologia of Protest legal aid group involved in the defense of over 1,000 detainees from the Saturday protests, called the authorities’ response “unprecedented.”

Navalny, an anti-corruption campaigner and Putin’s fiercest critic, was arrested Jan. 17 as he returned to Russia from Germany, where he had spent nearly five months recovering from nerve-agent poisoning that he blames on the Kremlin. Russian authorities deny the accusations.

He was ordered jailed for 30 days but faces years in prison, with authorities accusing him of violating the terms of a suspended sentence in a 2014 conviction for financial misdeeds. Navalny has said the conviction was politically motivated.

Navalny’s arrest and the detention of demonstrators sparked outrage both at home and abroad, and some Western officials suggested imposing additional sanctions on Russia for its jailing of Navalny.

White House press secretary Jen Psaki urged the immediate and unconditional release of Navalny, as well as those who were detained in the crackdown. Psaki did not say when President Joe Biden plans to speak to Putin.

Biden was asked if he would put sanctions on the people involved in the poisoning and arrest of Navalny and what that means for prospects of the extension of the New START nuclear arms treaty with Russia.

“I find that we can both operate in the mutual self-interest of our countries as a New START agreement and make it clear to Russia that we are very concerned about their behavior,” he said, whether it involved Navalny or some other issue.

The European Union’s foreign ministers on Monday condemned his arrest and the detention of thousands at the protests. “The Council considered it completely unacceptable, condemned the mass detentions, and the police brutality over the weekend,” EU foreign policy chief Josep Borrell said after chairing the meeting in Brussels.

The ministers, however, stopped short of weighing new sanctions. Borrell said “there has not been any concrete proposal on the table,” but added that the ministers are “ready to act, depending on the circumstances.”

In Russia, public indignation was further fueled by an investigation Navalny’s team released into what they called “Putin’s palace.” A two-hour video posted on YouTube on Jan. 19 alleged a lavish “palace” was built for Putin on the Black Sea through an elaborate corruption scheme. It has since received over 86 million views.

The Kremlin has denied the estate had anything to do with the president. Speaking to students via video on Monday, Putin himself addressed the allegations, calling them an attempt to “brainwash our citizens” and saying that “none of what is mentioned there as my property has never belonged, and doesn’t belong, to me or my close relatives.”

Asked about Saturday’s protests, Putin said that “all people have the right to express their point of view within limits, outlined by law.” He referenced the Jan. 6 attack on the U.S. Capitol and said that those taking part in it were facing “between 15 and 25 years, as if for domestic terrorism.”

The Russian protests and crackdown appeared to have further strained Russia-U.S. relations.

U.S. State Department spokesman Ned Price on Saturday condemned “the use of harsh tactics against protesters and journalists” and urged authorities to release Navalny and “all those detained for exercising their universal rights.”

Kremlin spokesman Dmitry Peskov accused Washington of interfering with Russia’s “internal affairs,” after the U.S. Embassy in Moscow put a warning on its website detailing times and places of rallies in different Russian cities and urging U.S. citizens to avoid them.

On Monday, Russia’s Deputy Foreign Minister Sergei Ryabkov lodged a protest to the U.S. Ambassador John Sullivan in connection to “social media posts in support of unlawful rallies” by the U.S. Embassy in Moscow.

The ministry said it has also deemed the statement of the U.S. State Department spokesman “inappropriate.”