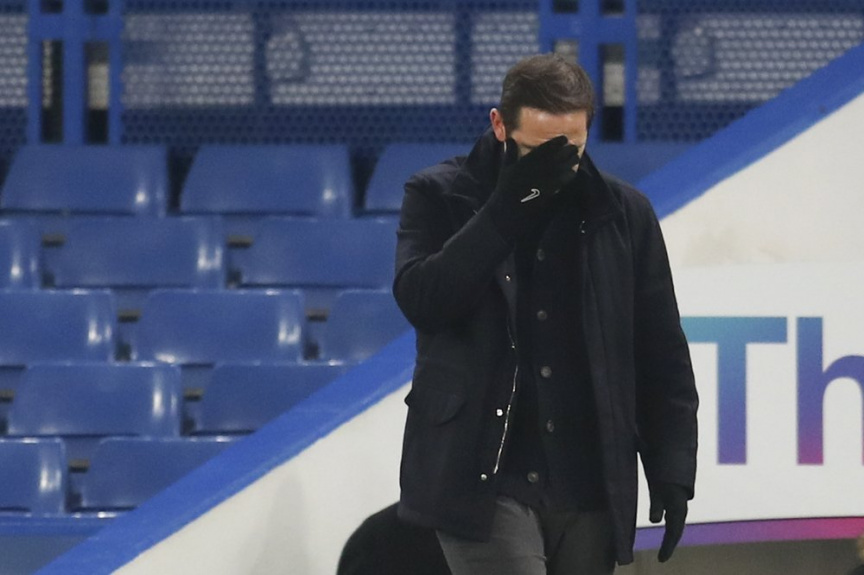 Not even another goal from talisman Olivier Giroud could give Chelsea coach Frank Lampard the change in fortune he needs, as his team drew 1-1 with Aston Villa in the Premier League on Monday.

That makes it just one win in the past five games for Lampard, who recruited heavily during the summer transfer window to mount a title challenge yet still seems unsure what his best side is. Sixth-place Chelsea is six points behind leader Liverpool, having played one game more than the defending champion.

“This is our tough period at the moment, and we have to fight for it and we’ll be stronger for it,” Lampard said. “I thought we deserved to win the game, but we didn’t and we continue to go through a difficult patch.”

Giroud’s goals late last season inspired Chelsea to secure a place in this season’s Champions League and vindicated Lampard’s decision to give the veteran France forward a run of games.

After starting Tammy Abraham in the past two league outings, he went for Giroud this time and the Frenchman put Chelsea ahead with an excellent diving header from Ben Chilwell’s cross in the 34th minute.

“The attitude of the team was good,” Lampard said. “I saw some really good signs tonight that I liked.”

But Villa showed its resilient streak to level through Anwar El Ghazi in the 50th minute and create further chances, with midfielder John McGinn’s superb 25-minute strike rattling the crossbar in the 69th minute.

Both sides are level on points with tough games coming up.

Fifth-place Villa, which leads Chelsea on goal difference but has played two less games, travels to play Manchester United on Friday while Chelsea is set to host Manchester City on Sunday.

That game could yet be in doubt, however, because Monday’s match between Everton and City was called off amid City’s growing coronavirus outbreak, which forced the team to close its training ground.

This allowed Leicester to jump above Everton and into second place on goal difference, after scraping a 1-1 draw at Crystal Palace thanks to a fine equalizer from Harvey Barnes in the 85th.

Leicester trailed 1-0 after Wilfried Zaha’s 58th minute goal and then almost won the match with the last attack of the game at Selhurst Park.

But midfielder Ayoze Perez sliced a difficult chance over with prolific striker Jamie Vardy so close to reaching the ball before him.

“I thought after we conceded the goal, some of our play, the speed of our game, was really good,” Leicester manager Brendan Rodgers said. “We end up frustrated that we haven’t won the game.”

But Rodgers may rue starting with Vardy on the bench.

His replacement Kelechi Iheanacho had a penalty saved by goalkeeper Vicente Guaita in the 20th minute and then missed a free header from close range later in the game.

Those misses proved costly when Palace opened the scoring with Zaha starting and finishing a move which Leicester struggled to read despite only two Palace players being involved.

Zaha turned and accelerated in midfield and then played a pass down the right to Andros Townsend, whose deep cross to the back post was met by Zaha’s crisp right-footed volley. His eighth Premier League goal doubled his tally from last season, and moved him just two behind his career-best tally of 10 two seasons ago.

Barnes also finished well and once again from outside the penalty area, just like he had done in a 2-2 home draw with Manchester United last Saturday.

This time, Barnes squirmed away from a couple of tackles and planted a low shot from about 20 meters into the bottom right, having struck the ball into the bottom left against United.

Hours before kickoff was due at Goodison Park, City announced a number of new positive coronavirus cases, and the Premier League said further testing would take place at City on Tuesday.

Striker Gabriel Jesus and defender Kyle Walker had tested positive for COVID-19 along with two staff members on Christmas Day.

It was the second top-flight match called off due to coronavirus cases after Newcastle’s game against Aston Villa earlier this month.

“The Premier League continues to have full confidence in its protocols and rules, and the way in which all clubs are implementing them,” the league said.