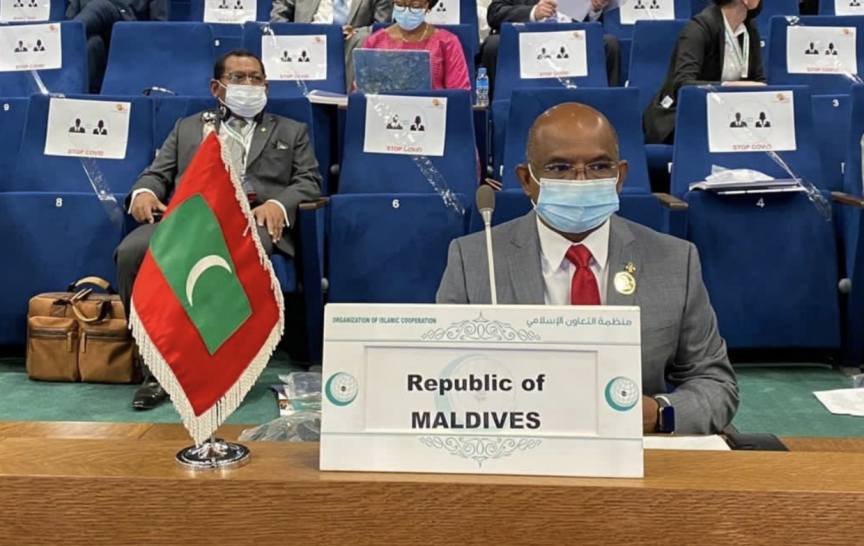 Foreign Minister Abdulla Shahid during a meeting of the OIC.

Foreign Minister Abdulla Shahid has returned to the Maldives after taking part in the 47th Council meeting of foreign ministers of the Organization of Islamic Conference (OIC) held in Niamey, Niger.

Discussions during the meeting ranged around issues faced by the Islamic community, resolutions regarding these issues, and resolutions previously passed. Former Foreign Minister of Chad Hussein Ibrahim Taha was also elected as the Secretary-General of the OIC during the meeting. Mr. Taha will be taking office in November next year.

Foreign Minister Shahid, during the meeting, spoke about the Rohingya crisis, the situation in Palestine as well as Western Sahara, terror activities, and movements against the religion of Islam.

The Minister also met with foreign ministers from nations such as Saudi Arabia, Turkey, Pakistan, Mauritania, Senegal, and The Gambia during the meeting. Senior officials of the delegations from UAE, Indonesia, Uganda, Mozambique, and Morocco were also met by the Minister.

The Foreign Ministry also stated that Minister Shahid had made a transit in Riyadh, Saudi Arabia where meetings were held with senior government officials including Saudi Tourism Minister who also serves as the Chairman of the Saudi Fund for Development Ahmad Aqil al-Khatib and the Secretary-General of the Muslim World League Sheikh Dr. Mohammad Alissa.

Discussions during this meeting ranged around the measures taken by the Maldives in light of COVID-19, the resurge of the economy, and activities planned for the purpose. The Permanent envoy from the Maldives to Saudi Arabia and the OIC,  Mohamed Khaleel, and Assistant Director of the Foreign Ministry Ahmed Salman Zaki also accompanied Minister Shahid during this trip.