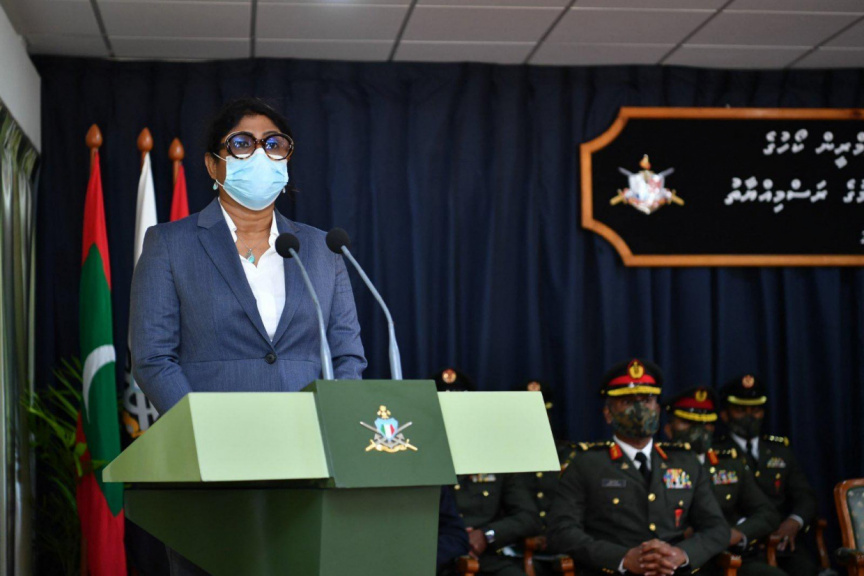 Defense Minister Mariya Ahmed Didi at the oath taking ceremony of the graduates of the 66th MNDF basic training program on November 26, 2020. (Photo/MNDF)

Defense Minister Mariya Ahmed Didi said on Thursday that the government remains engaged in efforts to establish gender equality within the Maldives National Defense Force (MNDF), stating that it is crucial for the development of the institution.

In her address at the oath taking ceremony of the graduates of the 66th MNDF basic training program on Thursday morning, Mariya said that current administration has been increasing the number of women in military service since it assumed power in 2018.

Mariya said that women made for five percent of graduates of the MNDF basic training program in 2016 and 2017, but the number has increased to seven percent in 2018, 11 percent in 2019, and 18 percent this year.

“We hope to increase the number of female military officers in the future. I note the efforts of the President of the Republic and Head of Defense Force Ibrahim Mohamed Solih to establish gender equality, guided by the conviction that no society can achieve true progress without gender equality,” she said.

“Guided by the conviction that this institution too will progress with the contribution of both genders, we shall, with the Grace of Allah, continue our tireless efforts to establish gender equality within the Maldivian defense force.”

Mariya congratulated 97 MNDF trainees who took their oath and were presented with arms this Thursday.a