Ethiopia warns civilians of ‘no mercy’ in Tigray offensive 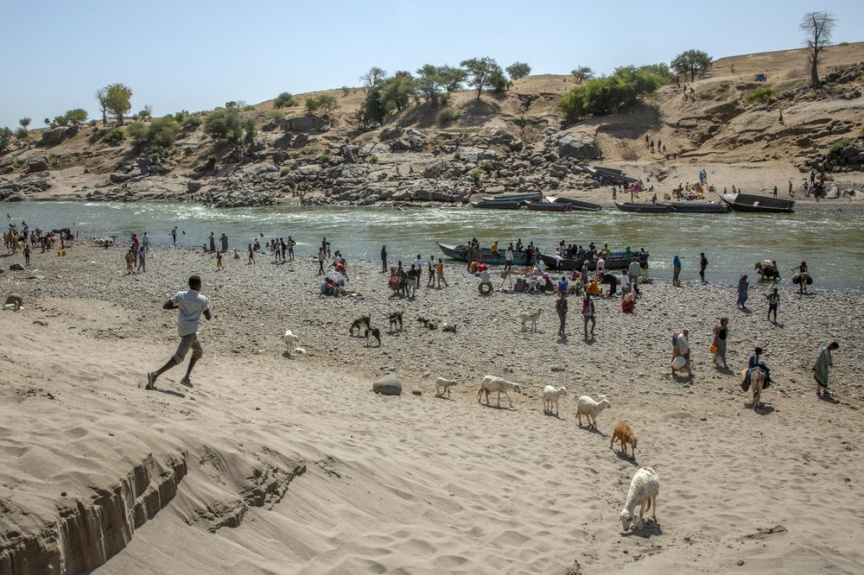 Tigray refugees who fled the conflict in the Ethiopia's Tigray arrive on the banks of the Tekeze River on the Sudan-Ethiopia border, in Hamdayet, eastern Sudan, Saturday, Nov. 21, 2020. (AP Photo/Nariman El-Mofty)

NAIROBI, Kenya (AP) — Ethiopia’s military is warning civilians in the besieged Tigray regional capital that there will be “no mercy” if they don’t “save themselves” before a final offensive to flush out defiant regional leaders — a threat that Human Rights Watch on Sunday said could violate international law.

“From now on, the fighting will be a tank battle,” spokesman Col. Dejene Tsegaye said late Saturday, asserting that the army was marching on the Tigray capital, Mekele, and would encircle it with tanks. “Our people in Mekele should be notified that they should protect themselves from heavy artillery.”

He accused the Tigray leaders of hiding among the population of the city of roughly a half-million people and warned civilians to “steer away” from them.

But “treating a whole city as a military target would not only unlawful, it could also be considered a form of collective punishment,” Human Rights Watch researcher Laetitia Bader tweeted Sunday.

Ethiopia’s Nobel Peace Prize-winning prime minister, Abiy Ahmed, in a new statement is giving the leaders of the Tigray People’s Liberation Front 72 hours to surrender, saying that “you are at a point of no return.” He accused the TPLF leaders of using religious sites, hotels, schools “and even cemeteries” as hideouts and using Mekele residents as human shields.

For days, Abiy’s government has asserted it was marching to Mekele in a final push to end the deadly conflict that erupted on Nov. 4 between the federal government and the heavily armed Tigray regional government. The TPLF dominated Ethiopia’s ruling coalition for a quarter century before Abiy took office and introduced dramatic political reforms and sidelined TPLF leaders.

Now, each side regards each other as illegal, complicating international pleas for dialogue amid worries that one of Africa’s most powerful and populous nations could fracture and destabilize the strategic Horn of Africa.

With communications and transport to the Tigray region almost completely severed, it’s difficult to verify the warring sides’ claims.

And Ethiopia’s government has expelled an analyst with the International Crisis Group, William Davison. The government hasn’t given a formal reason, the organization said, but “ultimately, there is little doubt that the reason for his deportation relates to the current tense situation in the country and the authorities’ increasing sensitivity to points of view that do not hew to its line.”

It added: “It is noteworthy that on the same day Mr. Davison was expelled, authorities also issued warning letters to the news agency Reuters’ Ethiopia correspondent and to the BBC and Deutsche Welle stations.”

Meanwhile, a vast humanitarian crisis is unfolding, with the United Nations saying about 2 million people in Tigray urgently need help as food, fuel, medical and other supplies run desperately short.

Two refugee crises are growing. Over 35,000 Ethiopians have fled into a remote area of Sudan, where local communities and humanitarians have struggled to feed and accommodate them. And inside the Tigray region, the fighting has come close to camps that are home to nearly 100,000 refugees from Eritrea. Some of the Eritreans have now fled a second time, into Sudan.