Maradona surgery for bleeding on brain ends with success 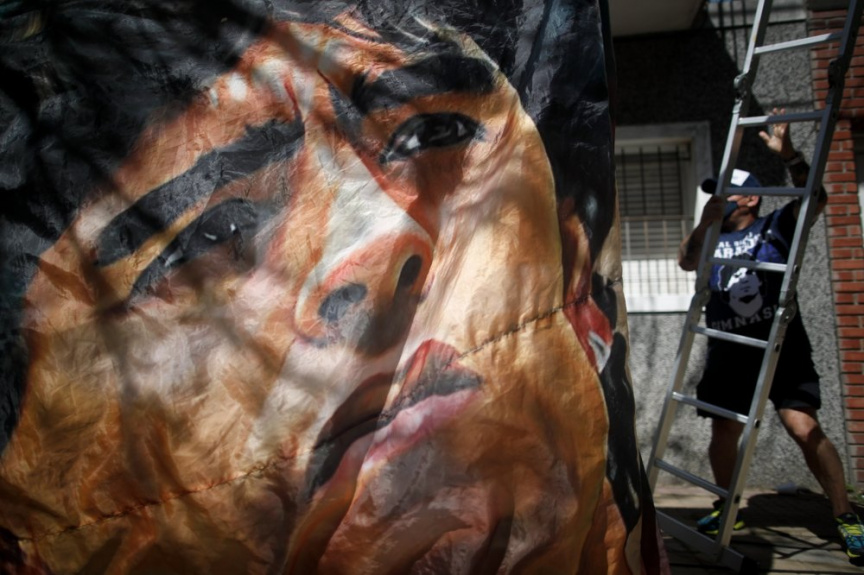 A banner of former soccer star Diego Maradona hangs outside the hospital where he is hospitalized in La Plata, Argentina, Tuesday, Nov. 3, 2020. (AP Photo/Natacha Pisarenko)

BUENOS AIRES, Argentina (AP) — Diego Maradona has had successful surgery for possible bleeding on his brain less than a week after his 60th birthday.

“It was all successful and it happened as expected,” Maradona’s public relations team said in a statement Tuesday night.

Maradona had a subdural hematoma, which is an accumulation of blood between a membrane and his brain, his personal doctor, Leopoldo Luque, said.

Luque, a neurologist, said the problem likely was caused by an accident, but Maradona said he doesn’t remember the event.

The Argentine soccer great will rest in his room in a private clinic outside Buenos Aires for at least 48 hours.

Maradona was accompanied to the clinic by his daughters Dalma, Giannina and Jana and other relatives, according to local media.

The surgery closed a journey that the 1986 World Cup champion started in another clinic in the city of La Plata, where he was admitted with anemia and dehydration.

Donato Villani, the head of the Argentine national team’s medical staff, told television channel TyC Sports that such a surgery normally goes well, “but it is different with Diego,” citing Maradona’s past treatment for cardiac problems and his use of drugs and alcohol.

Maradona was admitted to the Ipensa Clinic with signs of depression on Monday.

Luque said Maradona, whose “Hand of God” goal in the 1986 World Cup quarterfinal against England is among the most controversial in the tournament’s history, had felt sad for about a week and refused to eat before arriving at the clinic.

Maradona has lived in La Plata since the end of 2019, when he became coach of Gimnasia y Esgrima.

Maradona turned 60 last Friday and showed up that night for Gimnasia’s national championship match against Patronato, which his team won 3-0. He left before the end of the first half, which raised questions about his health.

“Diego feels much better than yesterday and feels like leaving,” Luque said Tuesday morning. “He spent the night well and we have been joking.”

Maradona led Argentina to a World Cup title in ’’86. He has continued to cause controversy since his heyday as a player, getting sent home from the 1994 World Cup in the United States and dropping in and out of the game as a coach.