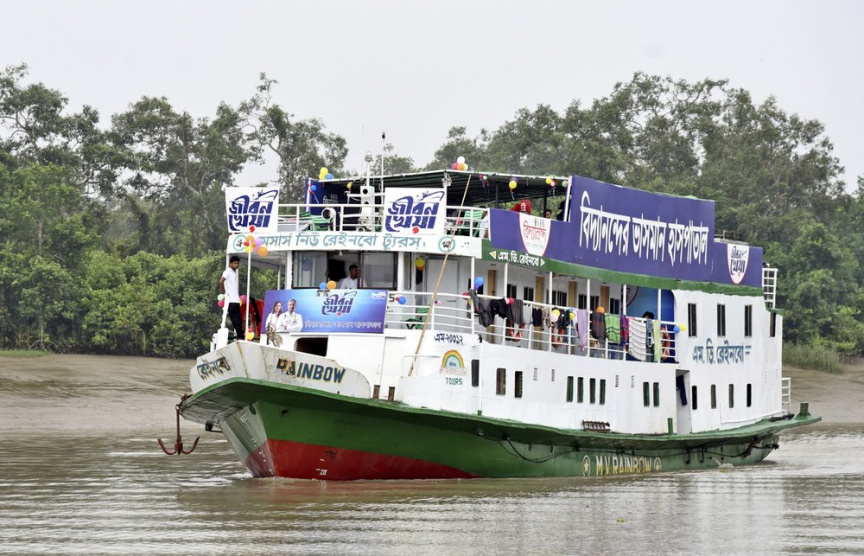 In this photo provided by Bidyanondo Foundation, floating hospital called ‘Jibon Kheya’,meaning lifeboat, arrives at Banishanta near Mongla seaport in southwestern region of Bangladesh, Sept. 1, 2020.. A Bangladeshi charity has set up a floating hospital turning a small tourist boat into a healthcare facility to provide services to thousands of people affected by this year's devastating floods that marooned millions. (Bidyanondo Foundation via AP)

DHAKA, Bangladesh (AP) — In late July, volunteers from a Bangladeshi charity started getting calls seeking support from people from the country’s vast coastal region that had been flooded for months during this year’s monsoon.

As the floodwaters started receding, the Bidyanondo Foundation quickly decided to hire a tourist boat to provide basic health care for those seeking aid. The country’s coast guards came forward with a route plan for the boat that was eventually turned into a floating hospital called “Jibon Kheya,” or lifeboat.

Authorities reported thousands of cases of waterborne diseases including diarrhea and skin diseases, but getting to a hospital is a problem in the flooded southwestern region. The coronavirus pandemic came as a double blow, as fears grew that the virus could spread among people who temporarily crowded shelters away from their submerged homes.

“We wanted to go to them since it is always a big challenge to visit hospitals during any disasters. They have no cash, road networks are destroyed in many places. And for the women, children and elderly people this is an impossible task,” said Monjoor Morshed, the foundation’s head of strategic planning.

“We hired a tourist boat from near the Sundarbans to start the hospital,” Morshed said, referring to the world’s largest mangrove forest and a popular destination for travelers.

The Jibon Kheya started its journey on Sept. 1 with eight doctors and nurses. It has two dentists and one ophthalmologist and a dozen trained volunteers.

The first point was a decades-old brothel near a seaport. On the first day, more than 300 people, mostly sex workers and their children, received treatment and medicines free of charge, Morshed said. Those who suffered from severe illnesses were referred to a general hospital in a nearby town.

“The first day was a great experience for our team. Seeing the smiling faces of these destitute people, our team was very excited,” he said.

The floating hospital then headed farther south, and on the way it would stop at a few dozen pre-determined spots. Volunteers said it has already treated thousands. They also distributed masks to those visiting the vessel.

Often devastated by natural disasters including floods and cyclones, hundreds of thousands of people living along the coast lose their land, homes, health clinics and roads every year. This year, almost 37% of Bangladesh was underwater for nearly three months, marooning about 5 million people in a nation of 160 million. More than 100 people had died from flood-related causes.

“Climate change is a reality. Our people are suffering. So we wanted to create an example that we must stand by them. Jibon Kheya is for that,” Kishor Kumar Das, chairman of the Bidyanondo Foundation, told The Associated Press. “Jibon Kheya is just an example as we wanted to spread the message that we have to redesign our development concepts to reach out to the people devastated by the impacts of climate change.”

Das said they were exploring options to build their own permanent hospital ship.

“I hope our dreams will come true soon,” he said.