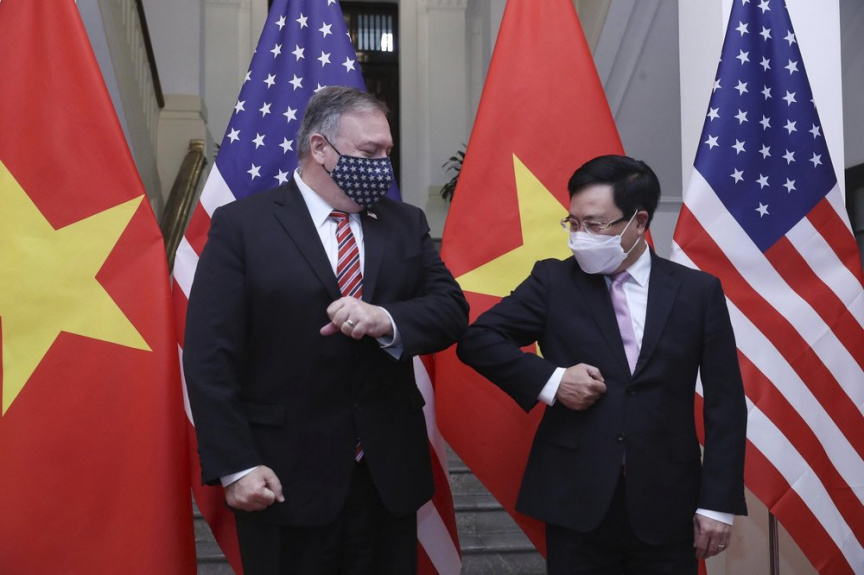 U.S. Secretary of State Mike Pompeo, left, and Vietnamese Foreign Minister Pham Binh Minh gesture with their elbows before a meeting in Hanoi, Vietnam, Friday, Oct. 30, 2020. Pompeo is wrapping up an anti-China tour of Asia in Vietnam as the fierce American presidential election race enters its final stretch. (Bui Lam Khanh/VNA via AP)

HANOI, Vietnam (AP) — U.S. Secretary of State Mike Pompeo wrapped up a five-nation, anti-China tour of Asia in Vietnam on Friday with a call for regional unity to counter Beijing’s growing assertiveness, as the fierce American presidential election race entered its final stretch.

With just four days left in the campaign in which China has been a central theme, Pompeo visited Hanoi ostensibly to celebrate 25 years of U.S.-Vietnam relations. But, as he has at his previous stops in India, Sri Lanka, the Maldives and Indonesia, Pompeo’s main aim was to shore up support for pushing back on China.

“We have enormous respect for the Vietnamese people and your country’s sovereignty,” Pompeo told Vietnamese Prime Minister Nguyen Xuan Phuc.

In brief comments heard by reporters, neither man mentioned China by name, but Pompeo’s use of the word “sovereignty” has become code for referring to opposition to Chinese encroachment, particularly in Asia.

“We look forward to continuing to work together to build on our relationship and to make the region — throughout Southeast Asia, Asia and the Indo-Pacific — safe and peaceful and prosperous,” Pompeo said.

The Trump administration has made confronting China, its handling of the coronavirus pandemic, human rights record and aggressiveness towards its smaller neighbors one of its main foreign policy priorities. Those issues, particularly the Chinese origin of the virus, have been highlighted by President Donald Trump as he seeks to beat back a stiff reelection challenge from former Vice President Joe Biden in the Nov. 3 polls.

Trump has sought to paint Biden as weak on China and beholden to it, repeatedly raising questions about alleged connections between Biden’s son, Hunter, and Chinese businesses.

Amid concerns about the spread of COVID-19, Vietnam was a late addition to Pompeo’s itinerary and has numerous fears about Chinese policies in the region. Those range from Beijing’s territorial and maritime claims in the South China Sea to its development activities along the Mekong River, which runs through much of mainland Southeast Asia and is a regional lifeline.

In a statement released ahead of Pompeo’s arrival in Vietnam, the State Department attacked China for reneging on cooperation pledges with other Mekong countries and for aggressively pursuing suspect claims in the South China Sea.

China’s “malign and destabilizing actions in the Mekong region, including manipulation of Mekong River water flows, negatively affect millions of people who depend on the river for their livelihoods,” it said.

“The United States stands with our Indo-Pacific allies and partners in protecting their sovereign rights to offshore resources in the South China Sea, consistent with their rights and obligations under international law,” it said. It noted that earlier this year, Pompeo had rejected outright nearly all of Beijing’s sweeping maritime claims in the South China Sea, including those involving Vietnam.

“The United States rejects (China’s) maritime claims to the waters surrounding Vanguard Bank off Vietnam’s coast,” the statement said. “We will oppose any efforts aimed at undermining the rules-based maritime order in the South China Sea or elsewhere.”

China’s moves to assert its claims in the South China Sea, through which a third of global shipping passes, have drawn rebuke from the United States and become a flashpoint for a region in which Southeast Asian neighbors Vietnam, the Philippines, Malaysia, Brunei and Taiwan all have rival claims.

China has ignored an arbitration ruling won by the Philippines that invalidated most of Beijing’s claims, and built military outposts on seven man-made islands.

Pompeo arrived in Vietnam from Indonesia, where he praised Indonesian leadership in the Association of Southeast Asian Nations for pushing back on what he called China’s “unlawful” South China Sea claims and denounced Beijing for its treatment of religious minorities, calling it “the gravest threat to the future of religious freedom.”

Pompeo had traveled to Indonesia from the Maldives, Sri Lanka and India on stops where he steadily ratcheted up the pressure on Beijing, which has rejected U.S. concerns and accused him and others in the Trump administration of fanning the flames of a new Cold War.

In the Maldives, Pompeo announced the United States would for the first time open an embassy in the Indian Ocean archipelago, a move that reflects growing U.S. concern about increasing Chinese influence and what he he called “its lawless and threatening behavior” in the Indo-Pacific region.

Just hours earlier in Sri Lanka, Pompeo had accusing China of being a ”predator” in smaller countries by exploiting them with loans and development projects intended to benefit the Chinese more than the intended recipients.

At his first stop of the tour in India, Pompeo and Defense Secretary Mark Esper had stepped up the administration’s anti-China message by playing on Indian suspicions about the Chinese to shore up a regional front against Beijing in the Indo-Pacific.

Just hours before the meetings in New Delhi began, the Trump administration notified Congress of plans for a $2.37 billion sale of Harpoon missile systems to Taiwan — the second major arms sale in two weeks to the democratic island that Beijing regards as a renegade province. China angrily reacted by announcing sanctions on U.S. defense contractors.

China: US respecting sovereignty of nations is a joke

Trump orders Chinese owner of TikTok to sell US assets