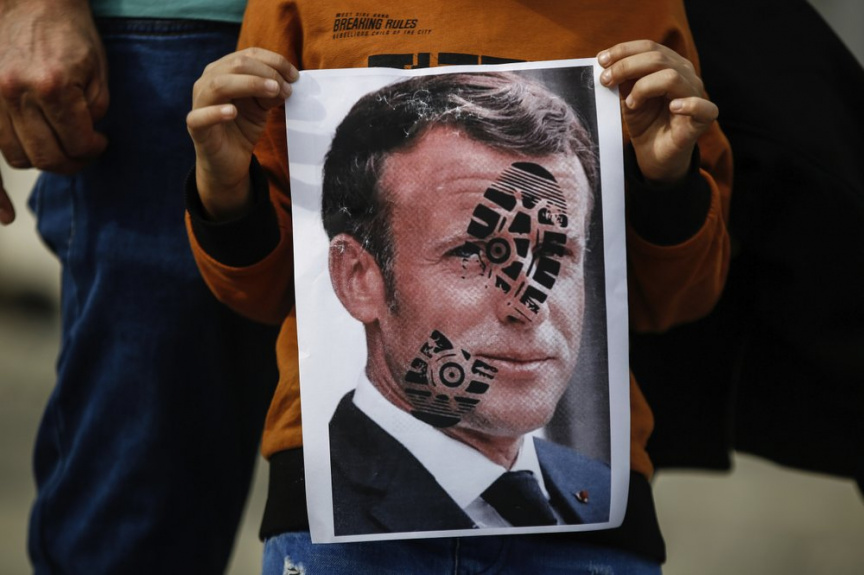 A child holds a photograph of France's President Emmanuel Macron, stamped with a shoe mark, during a protest against France in Istanbul, Sunday, Oct. 25, 2020. (AP Photo/Emrah Gurel)

PARIS (AP) — French authorities denounced Turkish “propaganda” against France that they said was aimed at fanning hate at home and abroad, and asked Sunday that calls to boycott French products cease immediately, saying such attacks were the work of a “radical minority.”

Meanwhile, the president of Turkey took a second insulting swipe at French President Emmanuel Macron for condoning caricatures of the prophet of Islam in a growing, potentially high-risk dispute.

A day after saying that Macron needed his head examined, Turkish President Recep Tayyip Erdogan said Sunday that the French leader has “lost his way.”

In an unusual move, France announced Saturday it was recalling its ambassador for consultations.

In a chain of back-and-forth communications, quickly rising temperatures and French concern over the ramifications of its policies on free expression, Macron added one more, tweeting Sunday night, in English and Arabic, “We will not give in, ever.” But he also affirmed, “We respect all difference in a spirit of peace.”

Another presidential tweet said in bold print “We are ONE.” In a recent count, the Arabic version had 28,000 comments - many of them insulting. They included pictures of Macron with a shoe stamped on his face.

The French Foreign Ministry said in a statement Sunday evening that its diplomats were mobilizing to ask countries where boycotts were being organized or hate calls issued not to back them, and to provide assurances that French citizens would be safe.

“In numerous countries of the Middle East, calls to boycott French products...and more generally, calls to demonstrate against France, in sometimes hateful terms, have been relayed on social media,” the French Foreign Ministry said. It added that such calls “denature” France’s positions on freedom of expression and conscience.

Meanwhile, Pakistan and a bloc of Muslim nations condemned, without using insults, remarks by Macron last week in which he refused to condemn the publication or showing of caricatures of the Prophet Muhammad.

France considers religious satire to be among the kinds of speech that fall under the freedom of expression, while many Muslims consider any perceived attack on their prophet as a grave offense. An 18-year=old of Chechen origin beheaded near Paris on Oct. 16 a teacher who had shown caricatures of Muhammad in class.

While eulogizing the teacher on Wednesday, Macron said France would not renounce its freedoms.

The Turkish leader criticized his French counterpart during a party congress on Saturday, questioning the state of Macron’s mental health. The French presidency reacted with indignation, but Erdogan did not back off.

“The person in charge of France has lost his way,” Erdogan said Sunday. “He goes on about Erdogan while in bed and while awake. Look at yourself first and where you’re going. I said yesterday...he is a case, and he really must be examined.”

A statement by French Foreign Minister Jean-Yves Le Drian denounced “hateful and slanderous propaganda against France showing a wish to fan hate against us and among us,” an apparent reference to potential reaction from France’s Muslim population, the largest in Western Europe.

Pakistan Prime Minister Imran Khan tweeted on Sunday that Macron chose “to encourage Islamophobia by attacking Islam rather than the terrorists” and “to deliberately provoke Muslims, including his own citizens.”

The 57-nation Organization of Islamic Cooperation, headquartered in Saudi Arabia, on Friday condemned the “ongoing practice of running satirical caricatures depicting the Prophet Muhammad” and “will continue to decry justification for blasphemy of any religion in the name of freedom of expression.”

Unlike Turkey, the organization had earlier condemned the slaying of the French teacher. Samuel Paty, was beheaded while leaving school in a Paris suburb. The 18-year-old suspect in the killing, who had become radicalized, was shot to death by police.

The teacher’s gruesome slaying, which is being investigated as an act or terrorism, came as the French government works on a planned law to fight “separatism,” notably Islamist radicals that Macron claims have created a parallel universe countering French values.

“What is the problem of this person called Macron with Islam and Muslims?” Erdogan, a devout Muslim, asked rhetorically Saturday during his Justice and Development party meeting in the central Anatolian city of Kayseri.

It was the latest episode in a string of increasingly bitter differences between Paris and Ankara that are fraying ties between the two NATO allies. Macron’s office said on Saturday that Erdogan’s policies are “dangerous.”

The French presidential office noted in its statement Saturday announcing the recall of its ambassador Turkey’s call for a boycott of French products. The move, if taken to heart, could add a layer of economic ramifications to the deepening diplomatic tussle.

Tensions between France and Turkey have intensified in recent months over issues that include the fighting in Syria, Libya and Nagorno-Karabakh, a region within Azerbaijan that is controlled by ethnic Armenian separatists.

Eiffel Tower grows even higher, thanks to new antenna