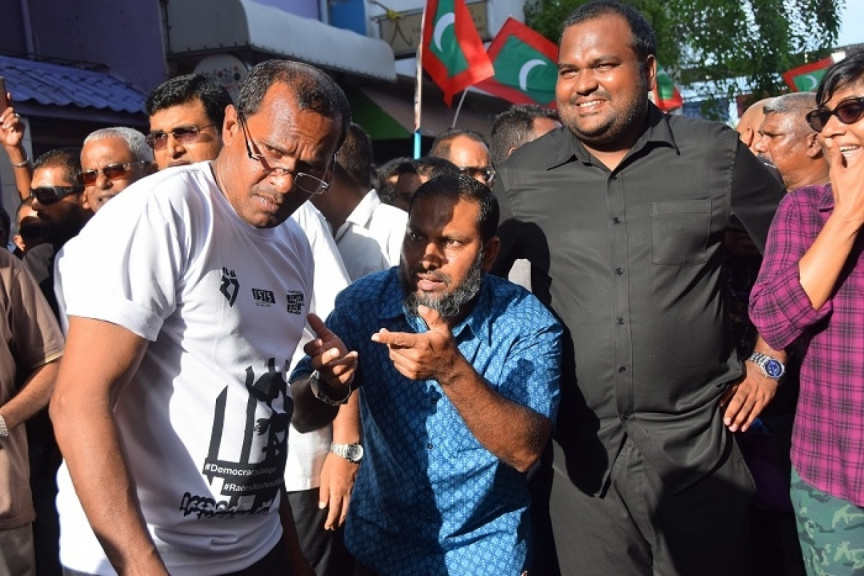 Home Minister Imran Abdulla during the May Day protests of 2015.

Home Minister Imran Abdulla has said that evidence in the case of missing journalist Ahmed Rilwan were seized by police during the May Day protests back in 2015.

The Minister said that he was in possession of important documents related to the case during the protests against the government back then. The Minister was responding to a question by a parliamentarian in a ministerial questioning session at the parliament today when he stated so.

“The Minister responding to a question by an MP belonging to the current opposition party said, “During the May Day protests back then, your government confiscated the documents I had. The documents will be in possession of those police officers who seized it. I will have to start a new investigation to see which police officer arrested me and who took the documents.”

The Minister was referring to the former administration of President Abdulla Yameen, whose parties now form the opposition coalition.

Minister Imran said that there was no investigation into the acts back then and that currently there were more investigations pending right now such as the MMPRC scandal.

Rilwan went missing near the Hulhumale’ Ferry Terminal on August 8, 2014. Attaining justice and solving the case is a pledge of the current administration who were the main opposition parties back then. A Presidential Commission had concluded that Rilwan was in fact abducted by individuals with extremist ideologies and murdered on board a boat. The investigation is still underway, however, charges are yet to be brought forward in the case.