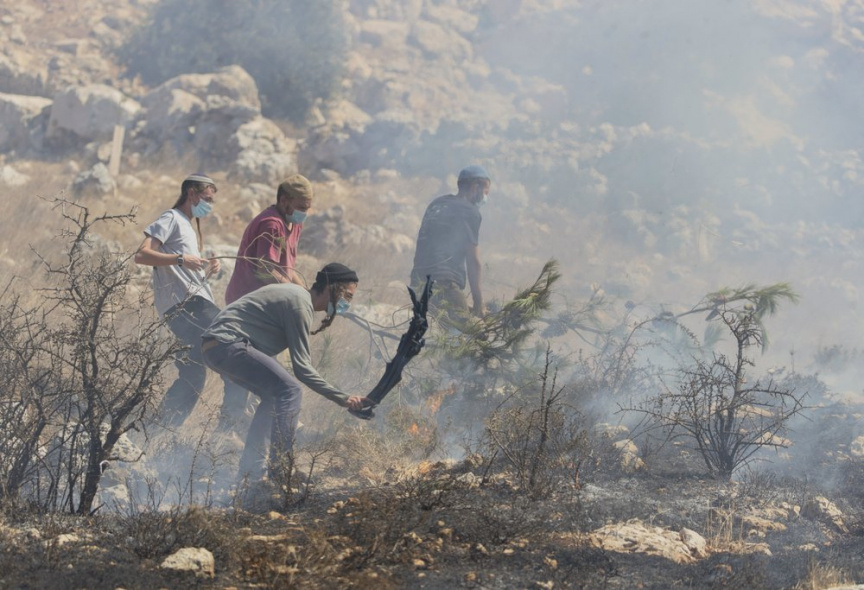 Jewish settlers fight fire in olive groves near their outpost that was caused by Israeli police's teargas canisters, used to disperse Palestinian farmers going to their groves, in the West Bank village of Burqa, East of Ramallah, Friday, Oct. 16, 2020. (AP Photo/Nasser Nasser)

JERUSALEM (AP) — Israeli plans to advance the building of thousands of settlement units in the occupied West Bank drew European condemnation on Friday as approvals for constructions hit a record high in 2020.

The European countries warned the building perpetuates the Israeli-Palestinian conflict and further threatens the viability of a two-state solution. The warning came after Israel on Thursday pressed forward on plans for more than 3,000 West Bank settlement homes.

The Palestinians claim all of the West Bank, captured by Israel in the 1967 Mideast war, as part of a future independent state. They say the growing settler population, approaching 500,000 in the West Bank, has made it increasingly difficult to achieve their dream of independence.

“We are deeply concerned by the decision taken by the Israeli authorities to advance more than 4,900 settlement building units in the occupied West Bank,” said a joint statement by foreign ministry spokespersons of Britain, France, Germany, Italy, and Spain.

“It is also a counterproductive move in light of the positive developments of normalization agreements reached between Israel, the United Arab Emirates and Bahrain,” it added, referring to the recent historic agreements between Israel and the two Gulf Arab countries.

Ayman al-Safadi, Jordan’s foreign minister, called for international pressure on Israel to stop the building of new settlements. On Thursday, the top diplomat of the European Union also condemned the latest Israeli decision.

“Settlements are illegal under international law. As stated consistently, the EU will not recognize any changes to the pre-1967 borders, including with regard to Jerusalem, other than those agreed by the parties,” the bloc’s foreign relations chief Josep Borrell said.

The latest Israeli approvals are part of a building boom that has gained steam during the presidency of Donald Trump. It also comes months after Israel promised to put on hold plans to annex parts of the West Bank in exchange for a U.S.-brokered normalization deal with the UAE.

The approvals raised the number of settlement homes to be advanced this year to more than 12,150, according to Peace Now, a settlement watchdog group. It is by far the highest number of approvals since Trump took office in early 2017 and the highest since Peace Now began recording the figures in 2012.

Also Friday, Palestinians clashed with Israeli troops and settlers in the West Bank village of Burqa, east of the city of Ramallah, while trying to get to their olive groves near a Jewish settlers outpost and harvest the olives. Harvest time is often a flashpoint between the sides.

Israeli troops fired tear gas and stun grenades to try to disperse the crowd. The military said in a statement that dozens of Palestinians threw stones at the troops, which the military said were there in coordination with the farmers.