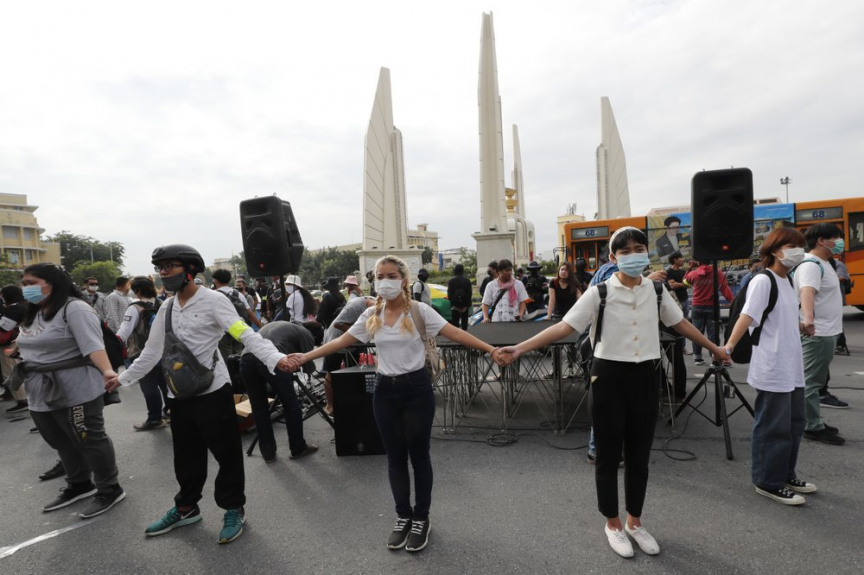 Anti-government protesters hold the hands together for security during a protest near Democracy Monument in Bangkok, Thailand, Wednesday, Oct. 14, 2020. Thai political activists hope to keep up the momentum for their campaign for democratic change with their third major rally in the capital Bangkok on Wednesday. (AP Photo/Sakchai Lalit)

BANGKOK, Thailand (AP) — Thai activists hope to keep up the momentum in their campaign for democratic change with a third major rally in Bangkok on Wednesday, though there are concerns about possible confrontation with police or rival government supporters.

Plans for the rally at Bangkok’s Democracy Monument have been complicated by King Maha Vajiralongkorn’s duties, which include him being driven around the protest venue to attend a royal ceremony.

The protest leaders said they will make way for the king, and police said they are confident they can control the crowds. Still, there is possibility that protesters, widely seen as unsympathetic to the king, could at a minimum show public disrespect for the crown.

The king made a similar drive on Tuesday after police cleared tents set up near the monument and arrested 21 people on minor charges.

“The Democracy Monument arrests raise serious concerns that the government will impose even harsher repression of people’s fundamental freedoms in Thailand,” said Brad Adams, Asia director at Human Rights Watch. “Thailand’s international friends should call on the government to stop arresting peaceful protesters, listen to their views, and allow them to freely and safely express their visions for the future.”

Protesters on Wednesday also planned to march to Government House — the office of Prime Minister Prayuth Chan-ocha — and surround it for at least a night.

The crowds at the last two rallies, held on weekends, were significant in number, with the Sept. 19 event estimated to be have attracted at least 20,000 people. But turnout could be weaker this time, because it falls on a weekday amid daily rain. A call for a general strike was abandoned.

The protesters have drawn attention, and scorn in some quarters, because of their demands for reforms in Thailand’s constitutional monarchy, which they claim does not properly operate in a democratic framework.

That demand has caused a huge controversy, because the royal institution has long been considered sacrosanct and a pillar of Thai identity. It is also protected by a lese majeste law that mandates three to 15 years in prison for defaming the monarchy.

Conservative royalist Thais are suspicious of the protesters, accusing them of seeking to end the monarchy, an allegation they deny.

However, the activists identify closely with the 1932 revolution that ended the absolute monarchy. Their movement has in a few months gone through several names, but they recently dubbed themselves the Khana Ratsadon, or People’s Party, after the group of civil servants and military officers behind the historic change.

Several royalist groups announced plans to stage counter-demonstrations near the rally, but their previous efforts have gained little popular support.

“I am not concerned about violence,” protest leader Parit “Penguin” Chiwarak told reporters. “Police should take care of safety for us and the other groups. We protest in a peaceful way.”

The other historical link claimed by Wednesday’s protesters is the date of the rally, which is the anniversary of the 1973 popular uprising that led to the toppling of a military dictatorship.

The protest movement was launched in March by university students but quickly put on hold as Thailand was gripped by surges in coronavirus cases. It came back in July, when the threat from the virus eased, and since then has again been spearheaded by students and publicized on social media.

The movement’s original core demands were new elections, changes in the constitution to make it more democratic, and an end to intimidation of activists.

The protesters charge that Prime Minister Prayuth, who as army commander led a 2014 coup toppling an elected government, was returned to power unfairly in last year’s general election because the laws had been changed to favor a pro-military party. Protesters say a constitution promulgated under military rule is undemocratic.

Prayuth’s government also faces broader criticism that it is ineffective and without direction as the economy, hit hard by the pandemic, sputters and the country remains closed to foreign tourists, the main source of income.

Thousands line up for tests amid Thai virus outbreak