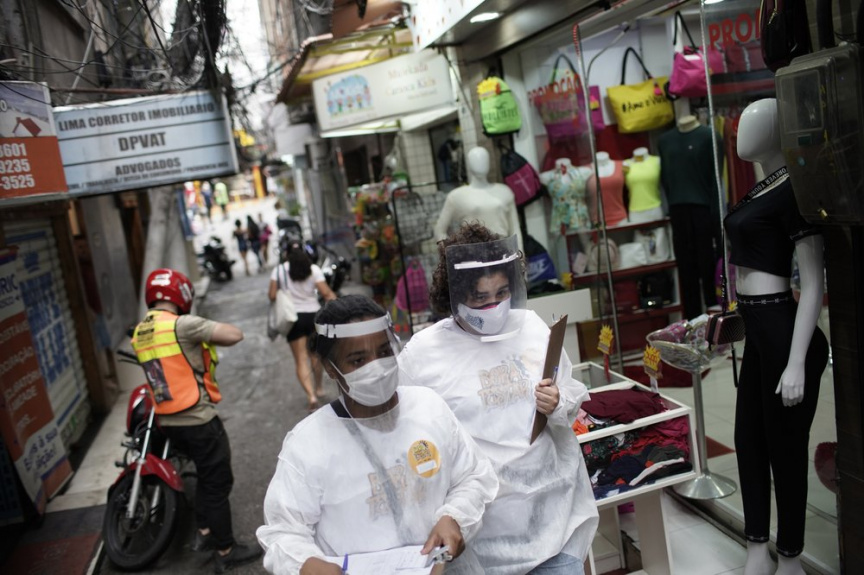 Health workers walk through the Rocinha slum to test people for COVID-19 as part of a rapid test campaign by the civilian organization "Bora Testar," or "Let's Test" in Rio de Janeiro, Brazil, Thursday, Oct. 8, 2020. Financed by crowdfunding and donations, the organization says it aims to test up to 300 people in the slum. (AP Photo/Silvia Izquierdo)

The Brazilian Health Ministry reported that the death toll now stands at 150,198. The figure is the world’s second highest behind the United States, according to the tally maintained by Johns Hopkins University.

The milestone has rekindled the pain of Naiane Moura, a sales consultant, who lost her father Elivaldo to COVID-19 in April. The 58-year-old postman had no prior illness and battled COVID-19 for seven days in a public hospital in Manaus, Brazil’s largest city in the Amazon.

“When I see 150,000, I see my father alongside many other faceless bodies,” Moura said by phone. “I didn’t imagine that we would reach that number. I don’t believe that we will ever be able to totally overcome this.”

Brazil’s far-right President Jair Bolsonaro played down the severity of the virus while deaths mounted rapidly in Brazil. The 65-year-old president flouted social distancing at lively demonstrations and encouraged crowds during outings from the presidential residence.

Bolsonaro rejected governors’ and mayors’ lockdowns and other tough measures to contain the virus’ spread, even after he contracted it himself in July, and insisted that shutting down Brazil’s economy would pitch the nation into chaos.

“Life goes on. Brazil needs to produce,” he said on July 7 in Brasilia when he announced he was infected.

Moura’s hometown of Manaus became a horror show early on in the pandemic. Between April and May, the health system collapsed in the city as patients were turned away from full hospitals and overwhelmed cemeteries were forced to dig mass graves. The capital of Amazonas state has had 122 deaths per 100,000 inhabitants, far above the national average of 71 per 100,000. The nation of 210 million people surpassed 5 million confirmed infections on Wednesday, according to official data.

There have been recent signs of relief in Brazil. Over the last month and a half, the viral curve has dropped. The average number of deaths sat at 598 over the last 7 days, the lowest level since the beginning of May.

The mayors of large cities such as Sao Paulo and Rio de Janeiro continue to reopen activities like cinemas and schools, even as public health experts warn of possible new outbreaks.

Manaus, where restrictions were relaxed, registered an increase in COVID-19 cases in recent weeks that led to speculation of a possible second wave. Local authorities reinstituted restrictions on commerce and activity, and shut down the riverside beach.

“A lot of lives could have been saved if our leaders had taken rigorous measures in the beginning,” she said.

Bolsonaro has faced fierce criticism of his handling of the health crisis, and changed health ministers twice in the midst of the pandemic. Yet his popularity is at its highest since he took office in January 2019, which political analysts attribute to his distribution of emergency cash to help tens of millions of poorer Brazilians withstand the economic downturn. Some 40% of Brazilians surveyed by pollster Ibope rate their government as good or excellent, according to a poll published Sept. 24 that has a margin for error of 2 percentage points. “Bolsonaro helped the population to open their eyes. Health has to go hand in hand with the economy, ”said Paulo Gomes, 54, a taxi driver who supports Bolsonaro.

In Sao Paulo, Ricardo Vieira, a doctor working in one of the city’s largest working-class neighborhoods known as favelas, said the government’s COVID-19 cash transfer program wasn’t enough to shield the poor, who often have scarce access to healthcare.

To remedy the lack of support in the Paraisopolis favela, an NGO called G10 hired three private ambulances and eight health professionals, among them Dr. Vieira, who has been there since March.

“We are dealing with lives, and when we came to a poor community we saw that the government cannot reach these people.” Vieira told The Associated Press.

Despite the difficulties and the lack of resources, Vieira continues to fight to contain the pandemic’s devastation.

“I do what I can, I do my best,” Vieira said, as tears welled up then rolled down his cheek. “And I don’t know what else I could do.”