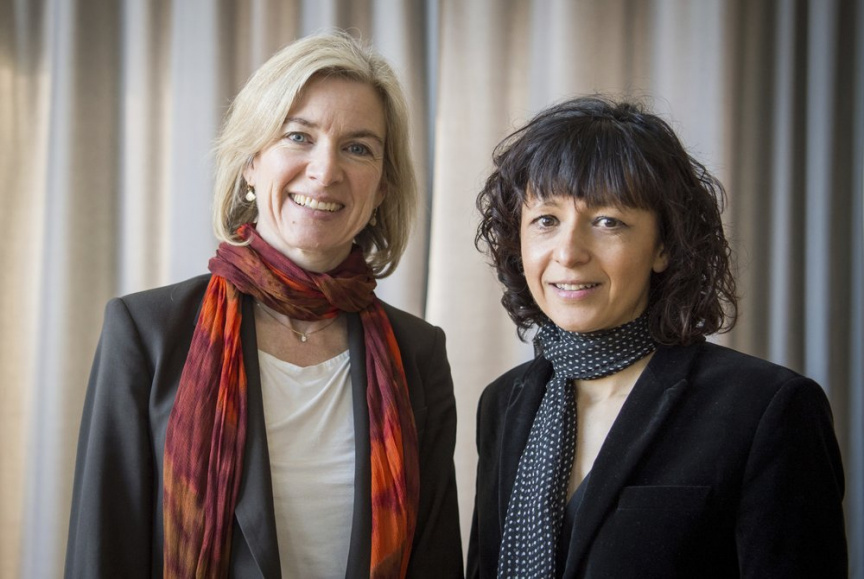 FILE -- In this March 14, 2016 file photo American biochemist Jennifer A. Doudna, left, and the French microbiologist Emmanuelle Charpentier, right, poses for a photo in Frankfurt, Germany. French scientist Emmanuelle Charpentier and American Jennifer A. Doudna have won the Nobel Prize 2020 in chemistry for developing a method of genome editing likened to ‘molecular scissors’ that offer the promise of one day curing genetic diseases. (Alexander Heinl/dpa via AP)

STOCKHOLM (AP) — The Nobel Prize in chemistry went to two researchers Wednesday for a gene-editing tool that has revolutionized science by providing a way to alter DNA, the code of life — technology already being used to try to cure a host of diseases and raise better crops and livestock.

Emmanuelle Charpentier of France and Jennifer A. Doudna of the United States won for developing CRISPR-cas9, a very simple technique for cutting a gene at a specific spot, allowing scientists to operate on flaws that are the root cause of many diseases.

“There is enormous power in this genetic tool,” said Claes Gustafsson, chair of the Nobel Committee for Chemistry.

More than 100 clinical trials are underway to study using CRISPR to treat inherited diseases, and “many are very promising,” according to Victor Dzau, president of the National Academy of Medicine.

“My greatest hope is that it’s used for good, to uncover new mysteries in biology and to benefit humankind,” said Doudna, who is affiliated with the University of California, Berkeley, and is paid by the Howard Hughes Medical Institute, which also supports The Associated Press’ Health and Science Department.

The prize-winning work has opened the door to some thorny ethical issues: When editing is done after birth, the alterations are confined to that person. Scientists fear CRISPR will be misused to make “designer babies” by altering eggs, embryos or sperm — changes that can be passed on to future generations.

Much of the world became aware of CRISPR in 2018, when Chinese scientist He Jiankui revealed he had helped make the world’s first gene-edited babies, to try to engineer resistance to infection with the AIDS virus. His work was denounced as unsafe human experimentation, and he has been sentenced to prison in China.

In September, an international panel of experts issued a report saying it is too soon to try such experiments because the science isn’t advanced enough to ensure safety.

“Being able to selectively edit genes means that you are playing God in a way,” said American Chemistry Society President Luis Echegoyen, a chemistry professor at the University of Texas El Paso.

However, scientists universally praised the great potential that gene editing has for patients now.

“There’s no aspect of biomedical research that hasn’t been touched by CRISPR,” which has been used to engineer better crops and to try to cure human diseases including sickle cell, HIV infection and inherited forms of blindness, said Dr. Kiran Musunuru, a genetics expert at the University of Pennsylvania who is researching it for heart disease.

Doudna said CRISPR also has the potential to be used to engineer plants to store more carbon or to withstand extremes of climate change, giving researchers a chance to “address urgent problems humanity is facing.”

It’s the fourth time in the 119-year history of the prizes that a Nobel in the sciences was given exclusively to women.

Charpentier, the 51-year-old leader of the Max Planck Unit for the Science of Pathogens in Berlin, said that while she considers herself first and foremost a scientist, “it’s reflective of the fact that science becomes more modern and involves more female leaders.”

“I do hope that it will remain and even develop more in this direction,” she said, adding that it is “more cumbersome to be a woman in science than to be a man in science.”

Three times a woman has won a Nobel in the sciences by herself; this is the first time an all-female team won a science prize. In 1911, Marie Curie was the sole recipient of the chemistry award, as was Dorothy Crowfoot Hodgkin in 1964. In 1983, Barbara McClintock won the Nobel in medicine.

The breakthrough research done by Charpentier and Doudna was published in 2012, making the discovery very recent compared with a lot of other Nobel-winning research, which is often honored only after decades have passed.

Dr. Francis Collins, who led the drive to map the human genome, said the technology “has changed everything” about how to approach diseases with a genetic cause.

“You can draw a direct line from the success of the human genome project to the power of CRISPR-cas to make changes in the instruction book,” said Collins, director of the U.S. National Institutes of Health, which helped fund Doudna’s work.

The Broad Institute, jointly run by Harvard and MIT, has been in a court fight with the Nobel winners over patents on CRISPR technology, and many other scientists did important work on it, but Doudna and Charpentier have been most consistently honored with prizes for turning it into an easily usable tool.

Feng Zhang, the Broad scientist most known for that work, made no comment on the awards, but the Broad’s director, Eric Lander, messaged congratulations on Twitter to the winners. Another Broad gene editing scientist, David Liu, noted on Twitter that the winners’ seminal research paper in 2012 has been cited more than 9,500 times, or about once every eight hours.

The Nobel comes with a gold medal and 10 million kronor (more than $1.1 million), courtesy of a bequest left more than a century ago by the prize’s creator, Alfred Nobel, the inventor of dynamite.

On Monday, the Nobel in medicine was awarded for the discovery of the liver-ravaging hepatitis C virus. Tuesday’s prize in physics honored breakthroughs in understanding black holes. The prizes in literature, peace and economics will be awarded in the coming days.

Nobel for Swede who unlocked secrets of Neanderthal DNA