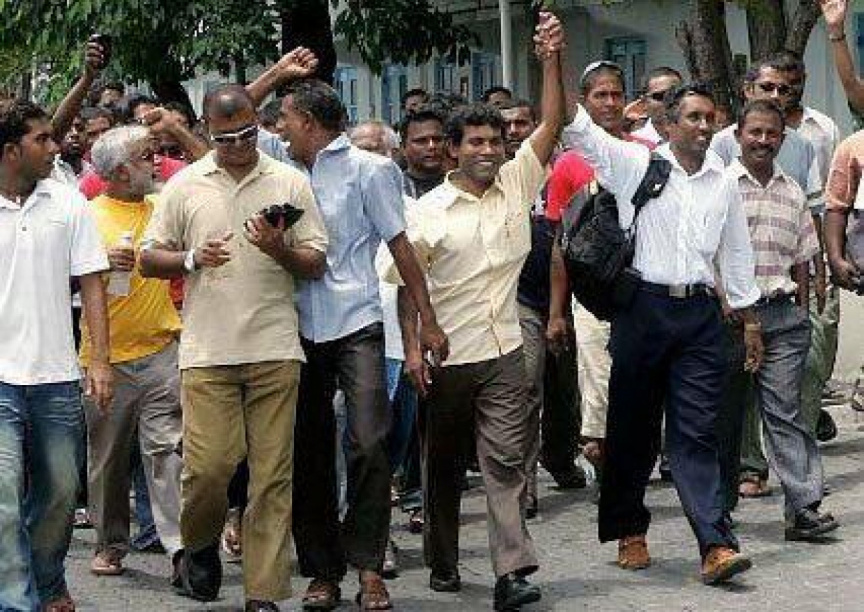 Shuaib Ali is photographed hand in hand with Mohamed Nasheed.

The deputy chair of the Party Action Committee of the Maldivian Democratic Party, Shuaib Ali has called on the party chairperson Hassan Latheef to prevent Speaker of the Parliament Mohamed Nasheed from influencing the cabinet members, in the capacity as the party leader.

The deputy chair called to prevent Nasheed from doing so, after alleging that repeated attempts at influencing Ministers were observed from the party leader.

Shubaib’s letter comes shortly after Nasheed sent a public letter to the chairperson calling for Economic Minister Fayyaz Ismail to be sidelined from duties due to allegations of corruption to which Minister Fayyaz has denied.

In the latter, Shuaib said that he believed Nasheed was acting in the spirit of revenge and that it was not acceptable for the “spiritual leader” of the party to misuse a power granted to parliamentarians and the President against the regulations and policies.

He added that the chairperson was the figure who should put a stop to this. Shuaib then noted that the President Ibrahim Mohamed Solih remained as the most senior leader of the party and that he was against switching to a parliamentary system for the Maldives, within the next five years, something which Nasheed has openly advocated for.

Shuaib said that he believed Nasheed was sacrificing the party for his own interests despite written regulations for Parliamentarians and chapters of the constitution which state how a Minister can be held accountable.