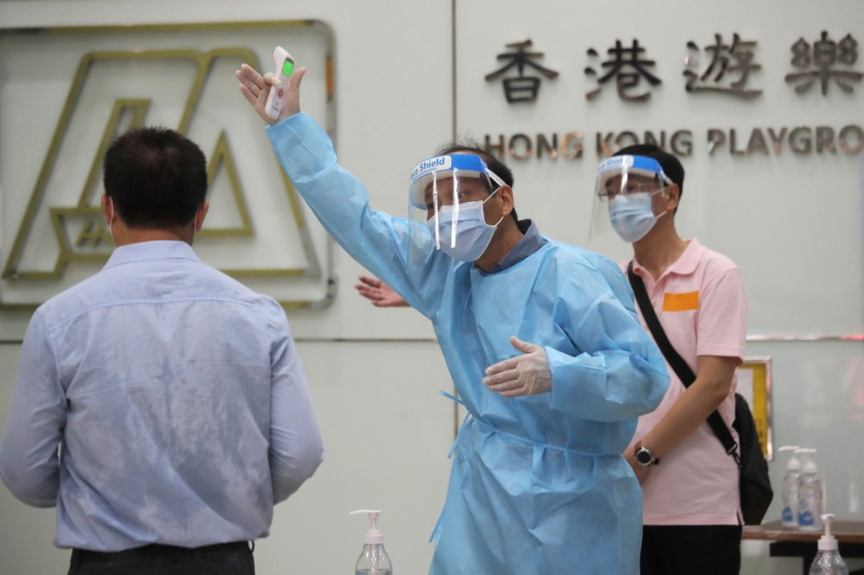 A man receives temperature check at a coronavirus testing center in Hong Kong, Tuesday, Sept. 1, 2020. Hong Kong began a voluntary mass-testing program for coronavirus Tuesday as part of a strategy to break the chain of transmission in the city's third outbreak of the disease. The virus-testing program has become a flash point of political debate in Hong Kong, with many distrustful over resources and staff being provided by the China's central government and fears that the residents’ DNA could be collected during the exercise (AP Photo/Kin Cheung)

HONG KONG (AP) — Hong Kong began a voluntary mass-testing program for coronavirus Tuesday as part of a strategy to break the chain of transmission in the city’s third outbreak of the disease.

The virus-testing program has become a flash point of political debate in Hong Kong, with many distrustful over resources and staff being provided by the China’s central government and fears that the residents’ DNA could be collected during the exercise.

The Hong Kong government has dismissed such concerns, saying that no personal data will be attached to the specimen bottles and that samples will be destroyed in Hong Kong after the exercise.

The testing program began at 8 a.m. with residents heading to more than 100 testing centers staffed by over 5,000 volunteers. Hong Kong chief executive Carrie Lam said at her weekly news conference on Tuesday that over 10,000 people, including most of Hong Kong’s government ministers, had already received testing on Tuesday morning.

“This large-scale universal community testing program is beneficial to fighting the epidemic and beneficial to our society. It will also help Hong Kong come out of the pandemic unscathed and is conducive to the resumption of daily activities,” Lam said.

More than 500,000 people in the city of 7.5 million signed up in advance for the program, which will last at least a week. It is aimed at identifying silent carriers of the virus — those without symptoms — who could be spreading the disease.

The government expects 5 million people will take part in the program, which could be extended to two weeks depending on demand.

Lam urged the public to see the program in a fair and objective light, and appealed to critics to stop discouraging people from taking the test so as to ensure that the program can be as effective as possible in detecting infected people in the community.

Hong Kong’s worst outbreak in early July was blamed in part on an exemption from quarantine requirements for airline staff, truck drivers from mainland China and sailors on cargo ships.

At its peak, Hong Kong recorded more than 100 locally transmitted cases a day, after going weeks without any in June.

The outbreak has slowed, with the city reporting just nine cases on Monday, the first time in two weeks that daily infections had fallen to single digits. However, the government and some experts say that community testing can help detect asymptomatic carriers to further stop the spread of the virus.

Respiratory medicine expert professor David Hui that even though infections have dwindled, the proportion of cases with untraceable sources of infection remain between 30% and 40%.

“That means there must be some silent transmission going on, so community testing has some role in picking up these silent transmitters,” said Hui, who is a public health adviser to the city’s government. “Hopefully if we can identify these people and isolate them for a period of time that may help to break the transmission chain in the community.”

The program is more effective if most of the population takes part, Hui said.

“If only 1 or 2 million people take part, then we may not be able to achieve that objective,” he said.

Other experts, such as Dr. Leung Chi-chiu, a respiratory specialist and a member of the Medical Council of Hong Kong, said that the testing program plays only a supplementary role in controlling the pandemic in the city, due to the long and variable incubation period of the coronavirus.

Leung said that mass-testing may not be the most cost-effective method, as it is not easy to pick up the disease in its early development, especially if a person is not having symptoms or have not had recent exposure to an infected patient.

Even if mass-testing could identify infected patients, they may already be past the infectious stage, he said.

Leung said that large-scale testing will not be able to replace traditional methods of social distancing and contact tracing measures, and should only be used as a complementary measure.