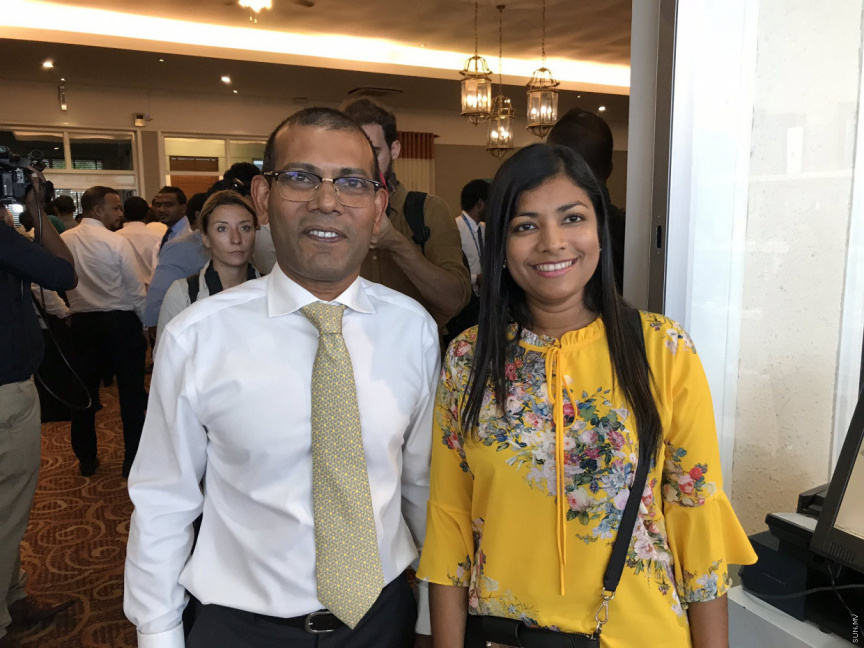 Speaker of the Parliament Mohamed Nasheed has called for the dismissal of MP for Addu City Meedhoo Rozaina Adam from the Maldivian Democratic Party (MDP).

The move by the party president comes after major differences in opinion arose between MP Rozaina, who is a long-serving member of MDP and Nasheed hit the limelight.

Nasheed called for the dismissal of Rozaina on MDP's WhatsApp group.

"I present the dismissal of Rozaina from MDP" said Nasheed.

Sun managed to confirm the validity of the message through multiple sources. Thoddoo MP Hassan Shiyan sent a message supporting the move soon afterward before adding it was something that should have been done previously.

The move against MP Rozaina comes not long after Nasheed's attempts to oust Economic Minister Fayyaz Ismail from his post through a motion of no confidence were commenced. The move had also led to stark differences within MDP, with some MPs supporting Minister Fayyaz.

One MP that is a strong supporter of the Economic Minister is MP Rozaina. She had recently tweeted that she was fully in support of party leader and President Ibrahim Mohamed Solih, before throwing a barbed indirect attack at Nasheed by saying that the country cannot be governed by two figures.

The MP also criticized the actions by some in the parliament for acting as an opposition party when the administration was governed by MDP. She had said that it was becoming "too much".

Nasheed has also directed attacks at MP Rozaina. A message sent to the Whatsapp group of MDP parliamentarians read that "no member would be caught in the trap" set by MP Rozaina. He added that he himself was not a child and that he would not allow separate powerbases and networks inside the party to exist.

MP Rozaina signed as a member of MDP on November 21, 2013 after serving as the deputy leader of DRP. After joining MDP, MP Rozaina had said that one of the reasons why she was proud to be a part of MDP was the courage shown by Nasheed, who had recently been ousted from the Presidency. MP Rozaina's spouse MP for Kinbidhoo Ahmed Nashiz is also a member of MDP.