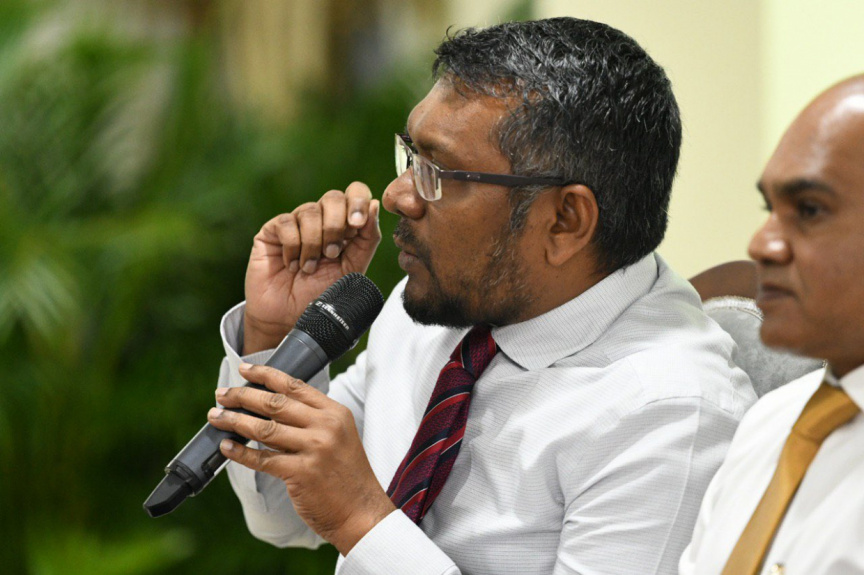 Economic Minister Fayyaz Ismail at the public forum on minimum wage held at the Parliament on March 4, 2020. (Photo/People's Majlis)

Economic Minister Fayyaz Ismail has said that he cannot think of a reason why foreigners cannot be employed as cashiers.

Foreigners were barred from serving as cashiers during the administration of President Abdulla Yameen. However, the regulations regarding this were scarcely enforced.

Speaking in a program of Raajje TV last night, Minister Fayyaz said that the decision of President Yameen was to forcefully create around 90,000 jobs.

A lot of businesses were forced to close shop due to the move.

“I do not support this in any way. I know this would direct the anger of many towards me. However, I don’t see any reason why we shouldn’t allow foreigners to work as cashiers.” Said the Minister.

The Minister said that foreigners were not conducting business by staying behind the counters as cashiers. He said that locals were behind such illegal activity and that it could hardly be proved in a court.

“That is the difficulty for me. We came to follow the law, rule of law. It should be proved that the business is owned by that person. Otherwise, I would be a huge dictator.” Said the Minister.

The country can only be developed by conducting business and that there was no limit for locals to do business. It should be done within the laws and taxes should be collected from them in order to accomplish things for the public benefit.

“That is my philosophy. Do more business, and pay taxes for that. Terminate the pointless obstructions to businesses. Only the necessary obstructions should be there, or means of increasing the revenue of the state should be implemented.” Said the Minister.

The Minister also said that the disallowing of foreign cashiers were not effectively monitored. This was due to budget difficulties and the lack of inspectors.

The Minister then said that the economy could not be run without foreigners and that the Maldivian economy required human resources, of which the local population did not have enough.