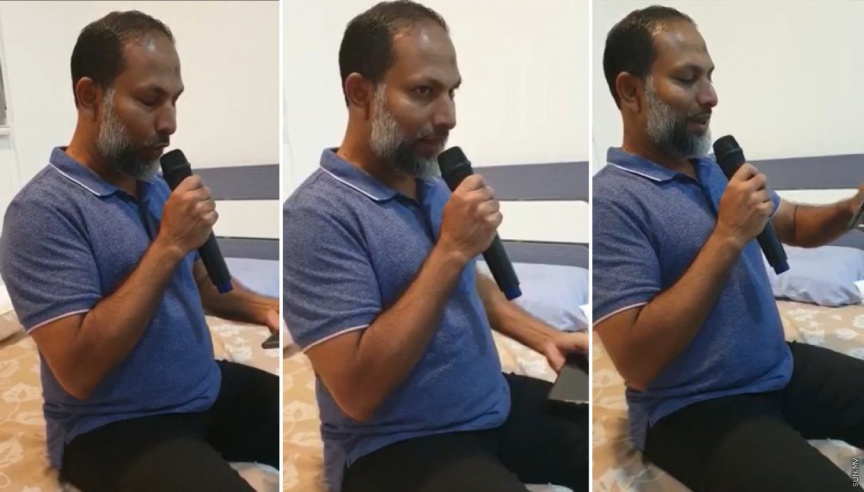 Ruqyah’ is the practice of treating illnesses through Quranic verses and is commonly used in Islam as a treatment for black magic.

However, Home Ministry Media Director Hafsy Abdulla refuted the claims and said that the Minister regularly attended the office and even instructed others on work.  However, multiple accounts of events have verified that the Minister has indeed not been attending office for quite a few days now.

Sun unsuccessfully attempted to get a comment on behalf of the Minister two days ago. The last time Minister Imran was publicly seen in an event was on July 5 when he attended a ceremony in Iskandar Koshi. However, the Minister did not speak at the ceremony.

A trusted source that viewed the video, stated to Sun that the Minister was most probably subject to black magic from a close source and was receiving treatment for the purpose in the form of Ruqyah’.

“It seems that the Minister was fed something. The difficulties are because the demon is inside him. Sometimes it can get better, while the other times it can get worse. What we are hearing on the video is a verse of the Quran, commonly used for Ruqyah’ purposes.” Said the practitioner.

The verse that the Minister is heard repeating is about the Tree of Zaqqum. In the Quran, it is described as the Tree of Hell and a poisonous food for the sinners. The verse is believed to affect the demons residing in the body.

Another Ruqyah’ practitioner said that it was possible that the black magic was due to something buried. If near the area where the object is buried, it may cause the subjected individual distress and loss of consciousness.

Sun has learned that efforts were made to scavenge the object, with police digging a cemetery in the capital. It is not confirmed whether the police were digging in connection with the Minister’s condition.

The Maldives has a special law related to white magic and Ruqyah’. The ancient practice of black magic is banned in the nation. However, charges are only brought against the possession of such items and not the actual practice itself.