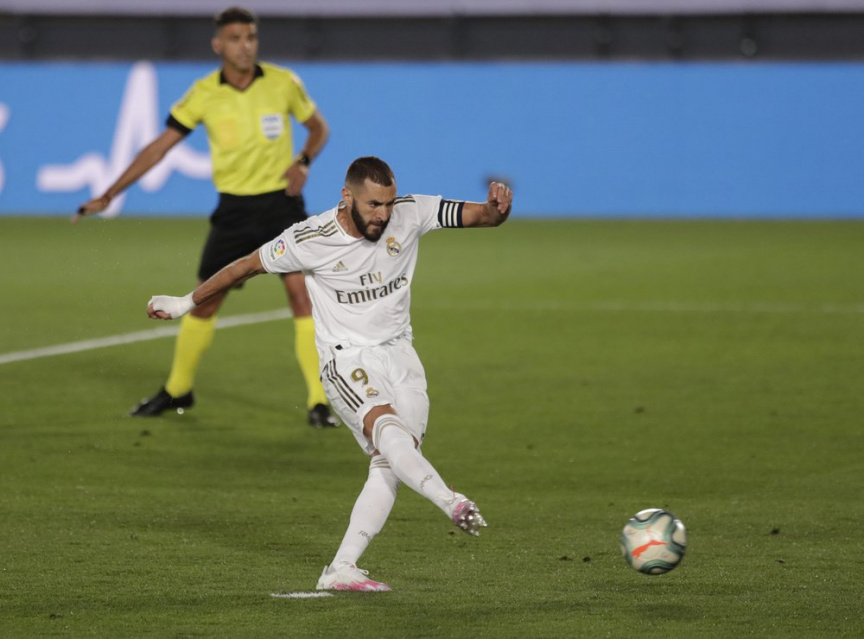 Benzema scored one goal and set up another to lead Madrid to beating Alavés 2-0 and restoring a four-point lead over Barcelona in the Spanish league with only three rounds left.

Benzema scored a penalty kick in the 11th minute and assisted Marco Asensio in the 50th to ensure an eighth straight victory since La Liga resumed play after stopping for three months due to the pandemic. Benzema has four goals during the winning streak and provided a superb assist for Casemiro to score in a 1-0 win at Espanyol three rounds ago.

Madrid will finish the season with matches against Granada, Villarreal, and Leganés.

Barcelona has games against Valladolid, Osasuna, and Alavés before the competition concludes on July 19.

Madrid holds the tiebreaker on head-to-head goals if they finish level on points.

“Anything can happen until this is over,” Zidane said. “It is a good result and how we have three to go.”

Zidane had to experiment in defense with Sergio Ramos and Dani Carvajal serving suspensions and Marcelo and Nacho Fernández injured.

While the left side was held down by the experienced Raphael Varane and sometimes starter Ferland Mendy, the right side went to Éder Militão in just his ninth league start of the campaign and Lucas Vázquez, a forward.

The new-look defense kept a fifth clean sheet in a row for Madrid.

Vázquez’s inexperience in defense showed three minutes into the match when Edgar Méndez dribbled past him and sent a cross to the second post, where Joselu Sanmartín headed the ball off the bar. Casemiro then had to block a follow-up header of the rebound by Lucas Pérez.

“We deserved to have scored that early goal,” new Alavés coach Juan Muñiz said. “You can’t miss those kinds of opportunities and still have much of a chance of pulling out the match. (Against Madrid) you have to take advantage of the scant opportunities you get.”

Mendy, who may play more after Marcelo was sidelined with a muscle injury earlier Friday, cued Madrid’s first goal. He broke into the area and was tripped by Ximo Navarro from a clumsy tackle attempt. With Ramos, Madrid’s regular penalty taker, unavailable, Benzema converted. His 18th league goal of the season is second only to Messi’s 22.

Alavés tried to rally through Oliver Burke. The Scottish forward drew a save from Madrid goalkeeper Thibaut Courtois in the 27th. Minutes later he dribbled past Vázquez and Militão, only to see Sanmartín scuff his dangerous pass back to the center of the area.

Madrid took full control just after halftime when Benzema broke Alavés’ offside trap to reach Rodrygo’s through-ball. Benzema drew Alavés goalie Roberto Jiménez to him and laid off for Asensio to tap into the open net. A video review had to overturn the initial decision that Benzema was offside.

Alavés was playing its first match under Muñiz, who replaced Asier Garitano after the team lost five in a row. The new defeat left the Basque Country club three points above the relegation zone.

The match was played without fans in Madrid’s smaller Alfredo Di Stéfano Stadium while Santiago Bernabéu Stadium is undergoing renovations.

Domingos Duarte scored the winning goal after setting up Granada’s opener in a 3-2 victory at Real Sociedad, keeping alive his side’s chances of qualifying for the Europa League.

Granada was level on points with Valencia, and one point behind Sociedad. The three are in contention with Getafe and Villarreal for a spot in the Europa League.