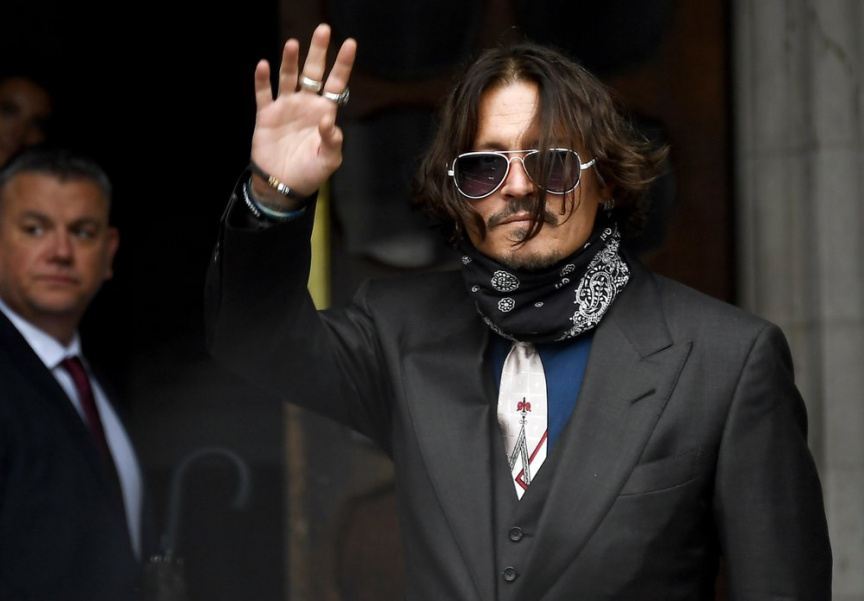 Johnny Depp arrives at the High Court in London, Wednesday July 8, 2020. Johnny Depp is facing a second day of cross-examination by lawyers for British tabloid The Sun, which is defending a libel claim after calling the Hollywood star a “wife beater.” Depp is suing The Sun’s publisher, News Group Newspapers, and its executive editor, Dan Wootton, over an April 2018 article that said he’d been abusive to ex-wife Amber Heard. (AP Photo/Alberto Pezzali)

LONDON (AP) — Johnny Depp denied an allegation by ex-wife Amber Heard that he is a “Dr. Jekyll and Mr. Hyde” monster who turned violent when he drank and took drugs, though he acknowledged in a London court on Wednesday that he may have done things he can’t remember while he was under the influence.

Depp underwent a second day of cross-examination at the High Court by a lawyer for British tabloid The Sun, which is defending a libel claim after calling the Hollywood star a “wife beater.” Depp is suing The Sun’s publisher, News Group Newspapers, and its executive editor, Dan Wootton, over an April 2018 article that said he’d physically abused Heard.

The “Pirates of the Caribbean” star says Heard’s claims that he assaulted her on multiple occasions are “totally untrue.”

Depp, 57, and Heard, 34, met on the set of the 2011 comedy “The Rum Diary” and married in Los Angeles in February 2015. Heard, a model and actress, filed for divorce the following year and obtained a restraining order against Depp on the grounds of domestic abuse. The divorce was finalized in 2017.

While neither Heard nor Depp is on trial, the case is a showdown between the former spouses, who accuse each other of being controlling, violent and deceitful during their tempestuous marriage.

The newspaper’s lawyer, Sasha Wass, read the court an email to Depp that Heard had composed in 2013 but never sent, in which she called his behavior a “full on disco blood bath.”

“I just don’t know if I can do this anymore,” she wrote. “It is like Dr Jekyll and Mr Hyde. Half of you I love madly, and the other half scares me.

“Many times you have hurt me. Physically and emotionally from the things you say and did while (messed) up,” she wrote.

Depp said the email was evidence “that Ms Heard was building a dossier” as “an insurance policy for later.”

Depp has acknowledged heavy drinking and drug use, but said Heard’s claim that drugs and alcohol made him a “monster” was “delusional.”

The Sun’s defense relies on Heard’s allegations of 14 incidents of violence by Depp between 2013 and 2016, in locations including Los Angeles, Australia, Japan, the Bahamas and a chartered jet.

Wass asked Depp about a 2014 private plane flight from Boston to Los Angeles. Heard alleges the actor went into a rage during the flight, slapped her and kicked her in the back because he believed she was having an affair with actor James Franco.

Depp denied assaulting Heard or being out of control on the plane.

Wass then presented Depp with a text he sent after the flight to a friend, actor Paul Bettany, saying he’d taken “powders ... Half a bottle of Whiskey. A thousand red bull and vodkas, pills, 2 bottles of champers (champagne) on plane.” The message said the result had been “blackout, screaming obscenities and insulting any (person) who got near.”

“I may have done things that I have no memory of,” Depp said. But he insisted “I am certainly not a violent person, especially with women.”

Depp acknowledged that he “could be jealous” but denied Heard’s claim that he took the painting off the wall, tried to set it on fire and slapped Heard when she intervened.

“I did not hit Ms. Heard and furthermore I have never hit Ms. Heard,” said Depp, who wore a gray suit, blue shirt and patterned tie for his second day in the witness box.

He also denied hitting Heard in 2013 after she laughed at a tattoo he had that read “Wino Forever.” He said he’d had it altered from “Winona Forever” after he split up with actress Winona Ryder years earlier.

“I don’t recall any argument about any of my tattoos,” Depp said.

Depp rejected every allegation of violence put to him by Wass.

He claims Heard was the violent one, attacking him with items including a drink can and a cigarette, and severing his finger by throwing a vodka bottle at him.

The court heard evidence of the couple’s acrimonious relationship, including text messages between Depp Bettany in which they joked about burning Heard because she was a witch.

Messages from Heard to Depp’s sister expressed worry that the actor was on “a bender” with another friend, rocker Marilyn Manson.

Depp acknowledged referring to Heard as a “lesbian camp counselor” when she tried to control his drinking and drug taking.

Asked about an incident in which he allegedly dangled Heard’s Yorkshire terrier, Pistol, out a car window, Depp said “it is absolute, utter falsity.”

“That is not my idea of fun, although my sense of humor is rather skewed,” he said.

He denied the lawyer’s suggestion that his memory had been impaired by alcohol and drug abuse.

He also clashed with Wass over whether Heard had tried to curb his drinking and drug use. Heard claims she tried to support Depp to become sober and never took cocaine during their relationship.

But Depp claimed that Heard had “many times” chopped out lines of cocaine for him, before rubbing some of the drug into her gums.

When Wass said Heard often had two or three glasses of wine during an evening, Depp shot back: “Two or three bottles.”

“That is complete nonsense, Mr. Depp,” the lawyer said.

Heard is attending the three-week trial and is expected to give evidence.