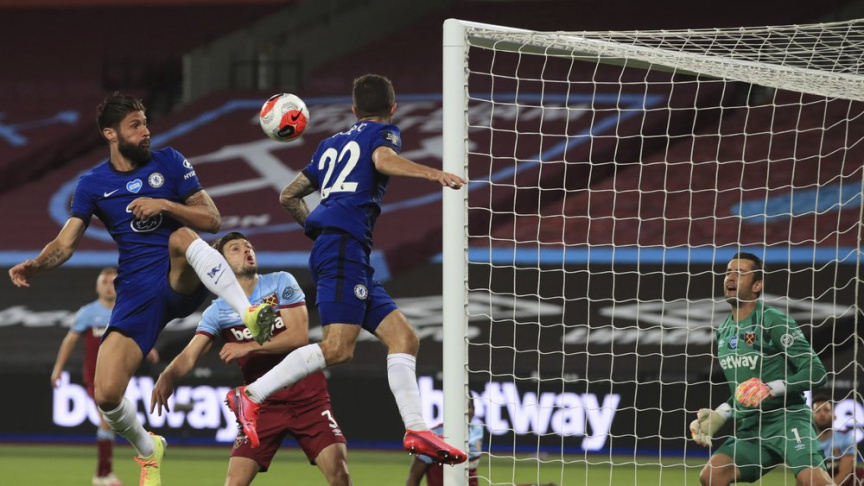 LONDON (AP) — With Leicester and Chelsea both losing, the race for European spots is heating up in the Premier League.

Leicester once looked certain of returning to the Champions League, but is now winless in four games after a 2-1 loss to Everton on Wednesday. Only Chelsea’s 3-2 loss at West Ham kept Leicester in third place — ahead of Frank Lampard’s side by one point.

Manchester United and Wolverhampton are only two points behind Chelsea with six games remaining of a season that resumed two weeks ago after the three-month pandemic-enforced break.

Even north London rivals Arsenal and Tottenham will have renewed — if fainter — hopes of returning to Europe’s elite competition.

After beating last-place Norwich 4-0, Arsenal moved within six points of United in fifth place, which will secure a Champions League spot if Manchester City’s two-season European ban is upheld.

Tottenham could move within four points of United with a victory at Sheffield United on Thursday. The game that completes the 32nd round on Thursday is Liverpool traveling to Manchester City for its first game since dethroning Pep Guardiola’s side as champions.

Four years after its shock run to the title, Leicester had been enjoying another standout season. Until January at least.

When the Foxes beat Newcastle on New Year’s Day, they were 15 points clear of sixth place. Now they are only three in front of Wolverhampton.

Leicester has only won two of its 11 league games since Jan. 1, with five losses.

“How we have performed for the best part of this season has got us into a strong position,” Leicester manager Brendan Rodgers said. “Our form hasn’t been the best for a period now but we still have it in our hands to achieve what would be a dream for us, getting into the top four. But we can only get that if the performance is right.”

West Ham turned around a night of frustration against Chelsea to seal a victory that moved the side three points clear of the relegation zone.

Tomas Soucek was denied an opener for offside after a lengthy VAR review. But his goal from another corner did stand in first-half stoppage time to cancel out a penalty converted by Willian after Christian Pulisic was tripped.

Michail Antonio put the hosts in front at the start of the second half and Willian looked like recovering a point for Chelsea when he netted for a second time in the 72nd minute.

But Andriy Yarmolenko completed a counterattack to end a run of three successive losses since before the season was suspended.

It ended Chelsea’s three-match winning run in the league.

“We had an opportunity to move third,” Chelsea manager Frank Lampard. “If there’s moments when you switch off you are going to encourage teams on. It’s been there. I’m very aware of it. The players then have to show that extra mentality, that extra bit.”

Arsenal forward Pierre-Emerick Aubameyang was gifted two goals by Norwich to end a four-game run without scoring. The captain also set up Granit Xhaka’s first goal of the campaign and Cedric Soares grabbed Arsenal’s fourth on his injury-delayed debut from the bench.

With 50 Premier League goals in 79 appearances, Aubameyang is the fastest Arsenal player to reach a half-century.

Now manager Mikel Arteta hopes he will sign a new contract beyond next season.

“A player that is able to score as many goals as he’s done in that short space of time tells you everything about the importance he has for us,” Arteta said.

Bournemouth missed a chance to climb out of the relegation zone after a 4-1 loss to Newcastle extended the winless run to seven games.

A club-record 19th loss in a top-division season was inflicted by goals from Dwight Gayle and Sean Longstaff in the first half and substitutes Miguel Almiron and Valentino Lazaro after the break.

Bournemouth remains a point from safety in next-to-last place.

Bayern finally gets its man, signs Leroy Sané from City