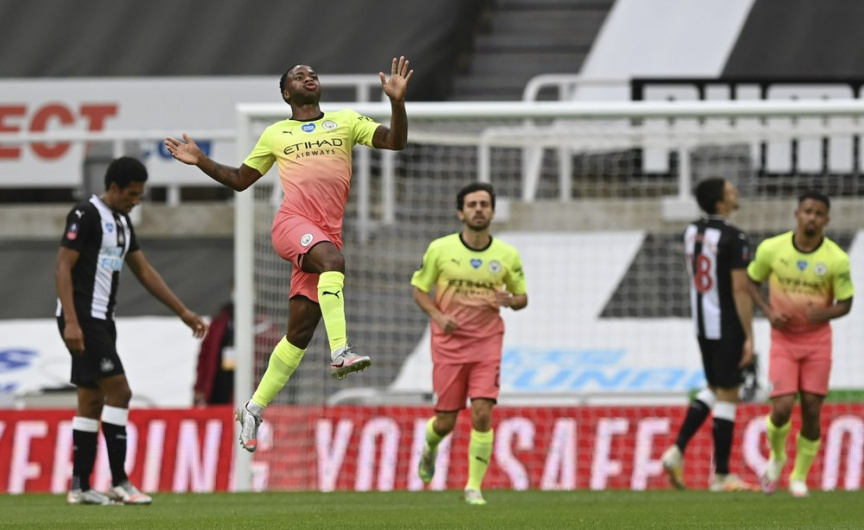 City conceded the Premier League title to runaway champion Liverpool this week, and must beat 13-time FA Cup winner Arsenal to reach another cup final. In Sunday’s draw, Chelsea will face 12-time winner Manchester United in the other semifinal.

Games will be held July 18-19 at Wembley with no fans present.

Earlier Sunday, Chelsea won 1-0 at Leicester and Arsenal needed an injury-time winner to edge a 2-1 win at Sheffield United.

De Bruyne put City ahead from the penalty spot in the 37th minute of a dominant first half. Dwight Gayle missed a great chance to equalize for Newcastle midway through the second half, blazing Allan Saint-Maximin’s pinpoint cross over from close range.

It was a rare opportunity for Steve Bruce’s side and a costly miss as Sterling scored moments later, curling a shot in from the edge of the box following a quick counterattack in the 68th.

Substitutes made the difference for Chelsea and Arsenal.

Chelsea midfielder Ross Barkley turned in a cross from Willian in the 63rd.

Spanish midfielder Dani Ceballos netted in the 91st for Arsenal with a low shot, just four minutes after David McGoldrick had equalized from close range.

Forward Nicolas Pépé’s penalty put Arsenal ahead midway through the first half, after United midfielder John Lundstram had an early header ruled out for offside. Defender John Egan’s header early in the second half was also chalked off, much to the frustration of the home fans.

Man United beat Norwich 2-1 on Saturday in the other quarterfinal.

Ings struck in each half to move one goal behind top scorer Jamie Vardy, who is enduring a lean spell for third-place Leicester.

Southampton moved up one place to 13th and is a comfortable 13 points clear of the relegation zone. But 16th-place Watford remains one point above the drop zone with six games left.